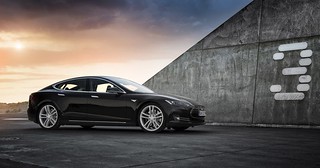 Tesla announced the Tesla Model 3 to much fanfare last night.

Elon Musk tweeted earlier this morning that the crazy rate at which reservations were being put in continued through the night and that reservations had topped 180,000 in fewer than 24 hours.

Musk did some quick math to calculate that those 180,000 orders (which are actually just reservations) would be the equivalent of $7.5 billion in sales based on an average option mix taking the car’s price to $42,000.

Musk followed this tweet up a short time later with another saying pre-orders continued to spike to 198,000.

According to analysts at Cairn Energy Research Advisors, Tesla has the capacity to ship 212,646 Model 3 cars (that’s cumulative) by the end of 2019. So grab your reservation quick to get your Model 3 before 2020.