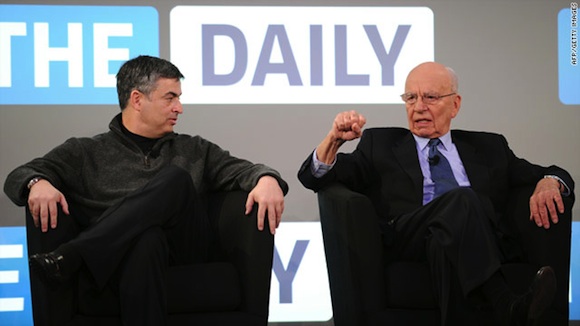 Today is a dark day for the media both, both new and old.

News Corporation is shutting down The Daily, its pioneering tablet newspaper, this month. The all-digital publication launched early last year and was hailed as the next evolution of print media.

At just 99 cents per week, the cost of subscribing to The Daily was far less than most print newspapers. But the publication bled money like crazy and was nowhere near profitable at any point in its existence, even after axing 29% of its staff earlier this year.

The closing of The Daily comes as News Corp separates is business into two independent, publicly traded companies.

In keeping with the company’s 60-year heritage of bringing news to the world, the publishing entity will retain the name News Corporation. The media and entertainment company, which began in earnest when Chairman and CEO Rupert Murdoch acquired 20th Century Fox and launched the Fox Network more than 25 years ago, will be named Fox Group.

“This is an incredibly exciting time, for me personally, and for our companies’ ambitious futures,” said Rupert Murdoch, who will become CEO of Fox Group. “The challenges we face in the publishing and media industries are great, but the opportunities are greater.”

“From its launch, The Daily was a bold experiment in digital publishing and an amazing vehicle for innovation,” Rupert added. “Unfortunately, our experience was that we could not find a large enough audience quickly enough to convince us the business model was sustainable in the long-term. Therefore we will take the very best of what we have learned at The Daily and apply it to all our properties.”

Earlier this year, The Huffington Post launched Huffington, a weekly longform magazine for the iPad. But after just one month, the magazine switched from costing 99 cents per issue to being free. A similar idea with similar execution and the same end result—an all-digital publication that just can’t convince readers to pay.

Up to 30 editors will be asked to leave the company via buyout packages. If they choose not to, the NYT will proceed to involuntary filings.

“There is no getting around the hard news that the size of the newsroom staff must be reduced,” executive editor Jill Abramson wrote in a letter to staff. “I hope the needed savings can be achieved through voluntary buyouts but if not, I will be forced to go to layoffs among the excluded staff.”

It appears that both print and digital media are struggling to survive in today’s world of cutthroat competition and ubiquitously free content.

Update: Here’s an interesting piece on Gizmodo titled “What It Was Like Launching the Doomed iPad Magazine The Daily.”