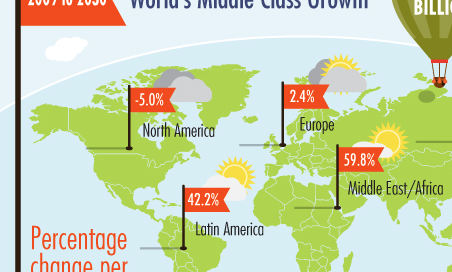 Canadian companies breaking into new markets this year may want to consider seemingly unorthodox options, such as Africa and Latin America.

However, it’s not the middle class we are used to. They are “unbankable,” according to Trulioo CEO Stephen Ufford. He writes in Forbes that “they still live in a world with a weak financial infrastructure and primarily use cash, not credit or debit cards,” adding that this is “a middle class that often operates outside mainstream financial institutions, because they have no credit history or credit identity.” In a world of increasing e-commerce, this presents a fascinating dilemma.

According to the Huffington Post, one potential solution is enhanced cyber identities, which cull “identity information from online sources such as social networks, mobile applications, and ecommerce sites can be used in place of traditional sources to establish trust.”

Check out the numbers in the infographic below. At the very least, it’s healthy food for thought.