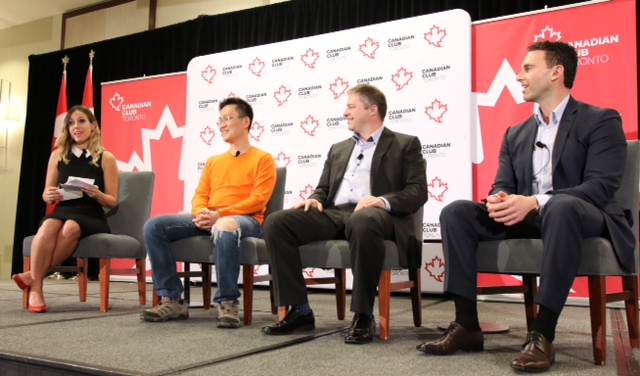 The purpose of the panel discussion was ostensibly how to build a company with routes in Canada, but the conversation turned more to the strengths and weaknesses of Canadian culture, and how it is evolving to become more entrepreneurial.

The panelists, Alan Lau, the co-founder and CEO of Wattpad, Steve Woods, founder of Equola and a few other companies, and Tony Lacavera, the founder of Wind Mobile, were moderated by Amber Mac, a tech journalist.

Much of the discussion focussed on Toronto, and specifically the long strides the city has made in building a startup ecosystem over the past 15 years. All the panelists agreed that Toronto was once a desert in terms of resources and an established tech landscape, but has since begun to flourish because of a unique set of strengths. These strengths included general quality of life and Toronto’s relative affordability compared to other tech hubs. But Lau noted the true strength of the Toronto ecosystem is the diversity of the city.

“51% of people in Toronto were not born in Toronto, so if you want to build a global business, I can’t think of a better place,” said Lau.

Lacavera echoed Lau’s sentiment. While travelling all over the world for Wind Mobile, Lacavera said that the incubators and accelerators are among the best anywhere.

“The startup ecosystem in Toronto is on par with anything I’ve seen in the world,” said Lacavera.

Lacavera also noted the desire many Canadian startups have to move to Silicon Valley as quickly as possible may be misguided.

“Go out there to get funding, but don’t set up headquarters there. Take advantage of the capital, but think about setting up your headquarters in Canada,” he said.

Beyond Toronto, the panelists were quick to point that Canada as an entire nation has made great strides in fostering entrepreneurship and creating businesses that have global impact. The trend, the panelists noted, is continuing in that direction, especially in certain areas, like quantum computing companies based in Vancouver.

“I’m hugely excited about the quantum computer. I think Canada’s ten years ahead in quantum computing, but we need to invest heavily,” said Lacavera.

Though the panelists were optimistic about Canada’s place in the world in terms of tech and entrepreneurship, they were quick to point out cultural barriers that may hinder Canadian companies. Alan Lau went as far to tell his employees, “guys and girls, we need to be more assertive. Don’t be so Canadian,” he said.

For Steve Woods, the cultural niceness of Canadians is something that can be a setback in such a competitive space, but ultimately can be overcome.

“There is a difference between us and our neighbors to the south, and that difference can manifest in Canadians not swinging for the fences,” said Woods.

Canadian culture in the tech sphere affects every aspect of the startup community, according to Lacavera. Toward the end of the conversation, the panelists answered rapid fire questions that the audience had written on cue cards. One of the questions for Lacavera was, “Is there a difference between venture capitalists in Canada and the US?”

While the bulk of the panel anchored in a Canadian context, the panelists also shared their ideas and experience that could help entrepreneurs more generally. For Steve Woods, the most important thing for startups today is using cutting edge technology. This goes beyond just tech companies, but any company should take advantage machine learning, or anything to give themselves an edge.

“If you’re creating a product in 2016 and not using cutting edge tech, you need to ask yourself why this wasn’t a business ten years ago,” said Woods.

For Alan Lau, the future of all industry hinges on the internet. Even though the internet feels like it’s existed for ever, Lau still sees room for another wave of innovation.

“We’re 20 years into the commercialization of the internet, but there’re so many industries left to be disrupted. We’ve made it through the first wave, and the second wave will be a tsunami,” Lau said.