The hype over 3D printing has been steadily calming down the last few years after being everywhere. As someone in the industry, the over marketing of the tech means that I still spend a lot of time with clients explaining the realities of what’s possible, and dispelling some of the science fiction myths that are out there. But that hasn’t stopped companies from using the technology to continue to innovate and find new ways to utilize it in all aspects of their business.

One of the real promises that 3D printing has actually delivered on is the ability to customize products that previously were only available in standard sizes that never quite fit anyone. Take for example shoes. How many times have you had to try different sizes from different manufacturers to find the right fit?

Most shoe companies have been using 3D printing to prototype their footwear for decades. But it’s only the last few years that the technology has gotten less expensive and fast enough to actually produce footwear (or portions of them) for commercial sale.

Nike made a big splash with their Vapor Hyperagility cleats, made for football players in the Superbowl a few years ago.

But ultimately those shoes were never released to the public and were designed for a very specific training exercise. 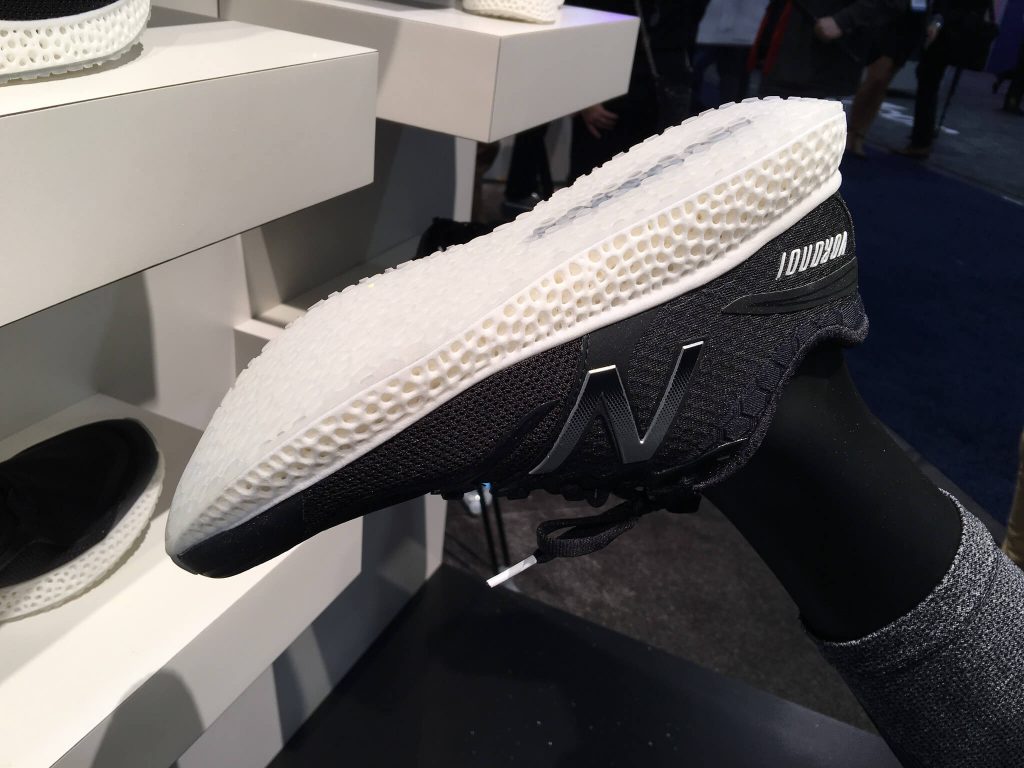 New Balance was at the Consumer Electronics show in 2016 where they unveiled one of the first pairs of commercially available 3D printed shoes, the Zante Generate. These were extremely limited edition shoes with only 40 pairs being produced for $400 a pair. These were also not completely 3D printed. The upper part of the shoe was made with traditional manufacturing methods with the the midsole being printed using a selective laser sintering process with a thermoplastic material. The complex geometry of the midsole provided just the right amount of support and bounce while being next to impossible to create using traditional production methods.

Adidas also came out with their own 3D printed shoes in 2016, the Futurecraft performance sneaker.

This year, Adidas, Under Armour and others have announced more 3D printed footwear products coming with plans to offer customization options previously not possible for essentially one-off products.

With breakthroughs in 3D scanning and machine learning, you’re now able to take a number of photos of your feet using a smartphone app to create a fairly precise measurement that is used to generate a printable insole. 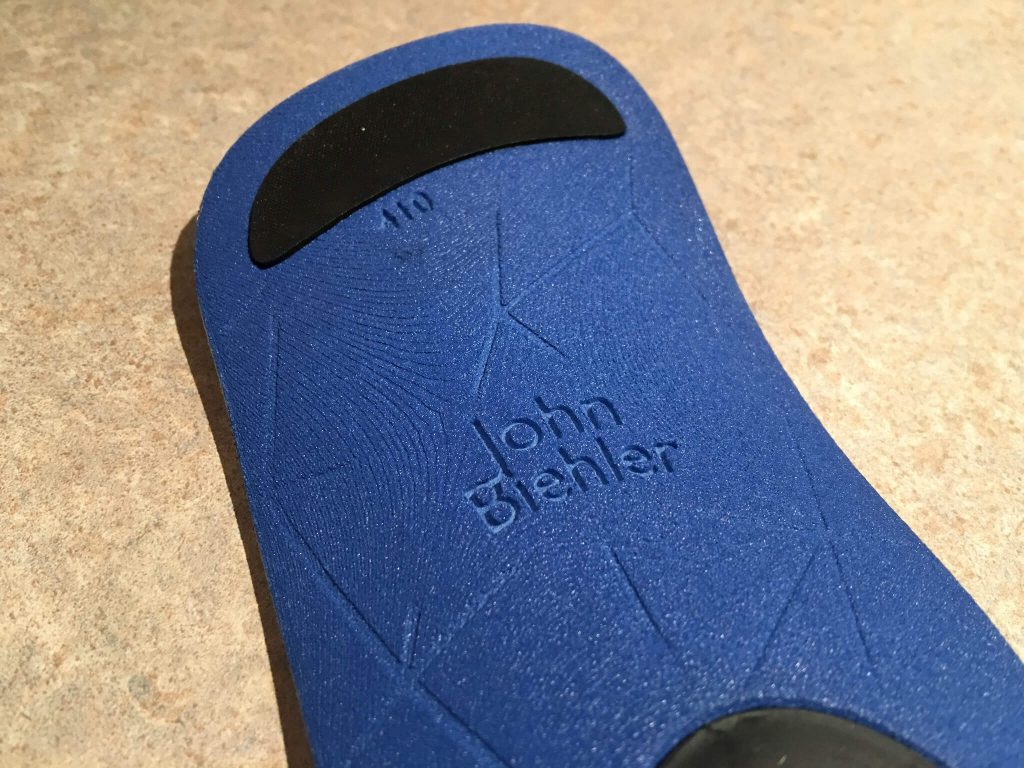 Vancouver based, Wiivv started making 3/4 length insoles using measurements taken by a smartphone app. I got to try these about a year ago and was very impressed with the simplicity of the app, the process of taking my own measurements and the quality of the insole. A year later and the insoles are still in my shoes providing great support. I was extremely skeptical that a 3D printed insole would hold up to daily wear but it shows no sign of breaking, cracks or anything beyond a little delamination of the top fabric covering the printed portion which is a sandwich of nylon and rubber.

Now Wiivv has expanded their product offerings to include a full length insole and coming later this year, custom sandals for both men and women. These sandals were one of the most popular 3D printed crowdfunding campaigns ever on Indigogo.

It’s not just footwear either.

In 2015, Ping shared their custom fitted and printed putter, the My3D putter. Made from powdered stainless steel, they found the printed version to be stronger than a putter made using their traditional metal casting process.

Epoch Lacrosse uses 3D printing to build their carbon fibre lacrosse sticks. According to James Miceli, Principal at Epoch, 3D printing has significantly shortened their product cycle. Using a series of tests during the development stage, they are able to determine a prototype’s strength, durability and overall performance. “By utilizing 3D printing in this stage, we’re able to make edits to product prototypes and experiment with different designs quickly and easily. 3D printing helps conquer one of our biggest challenges to constantly innovate and make product changes in the most effective way possible.” 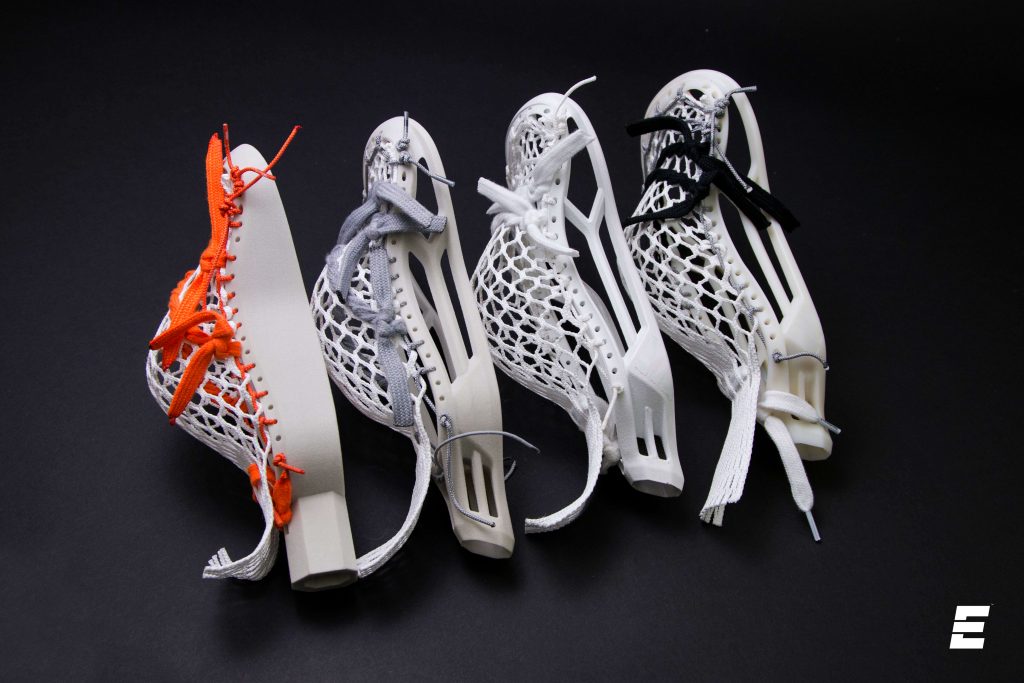 Towards the end of 2012, Epoch started to incorporate 3D technologies after seeing the production benefits. These benefits included increased speed-to-market, efficiency and flexibility to edit products, and enhanced sampling and collection of feedback and data. “These benefits ultimately allow for newer, more effective products to be produced in a shorter amount of time, and for less money.” Miceli said.

Jason Daniel, Epoch’s Composite Engineer added “3D printing is nearly ubiquitous in the sports and lacrosse industry, surely all of our competitors are using this technology in their development process. We realized that if we wanted to match or surpass our competitors, we needed to incorporate technology that allowed us to test and develop our products and gear more efficiently.”
3D printing “really took off in the last 10 years with the onset of more modern, cheaper and accessible technology, making it crucial that we begin utilizing it.” said Daniel.

One thing that has been hard to keep on top of is the constant barrage of new material options being made available for 3D printing. Going beyond plastics and metals are making a huge difference in the quality and variety of printed output possible. Many machines also now allow multiple materials to be used within a single print which can drastically change the performance of the product or part, as well as reduce post processing after printing. This allows companies to deliver truly customized and finished parts and products, right from the printer for their customers.

It’s only going to get faster, cheaper and more diverse as the technology gains more widespread adoption, both at the manufacturing and the consumer side of these company’s operations. We should soon start seeing companies being able to offer custom made products printed right in store (or nearby depending on method and materials) for print on demand customized products.