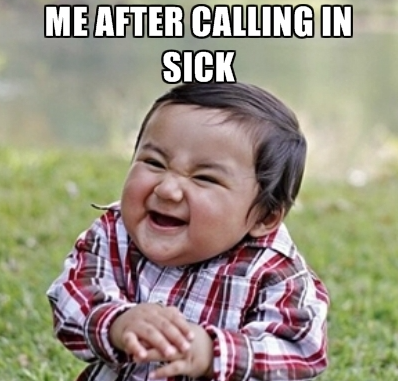 From claiming they need the day to fix some botched plastic surgery to saying they accidentally got on a plane, North America’s workers have either had some sitcom-worthy misadventures this year, or they’ve simply gotten more creative with their sick day excuses.

A new CareerBuilder survey this week looked at how many workers have faked being sick this year, as well as some of the strangest excuses they’ve used while doing so.

Over the past year, 28 percent of employees have called in to work sick when they were feeling well, down from 32 percent last year. When asked for a reason, 30 percent said they just didn’t feel like going in to work and 29 percent said they wanted the day to relax. Another 21 percent took the day off to attend a doctor’s appointment and 19 percent wanted to catch up on sleep. Meanwhile, bad weather was enough for 11 percent of employees to take the day off.

When asked to share the most dubious excuses employees have given for calling in sick, employers reported hearing the following real-life examples:

Though the majority of employers give their employees the benefit of the doubt, 31 percent say they have checked to see if an employee was telling the truth in one way or another. Among employers who have checked up on an employee who called in sick, asking to see a doctor’s note was the most popular way to find out if the absence was legit (66 percent), followed by calling the employee (49 percent). As many as 15 percent of employers went the extra mile (quite literally) and drove past the employee’s house.

18 percent of employers say they have fired an employee for calling in sick with a fake excuse.

Some workers have inadvertently busted themselves online. One in four employers (24 percent) have caught an employee lying about being sick by checking social media. Of those, 22 percent have actually fired the employee, but 54 percent were more forgiving, only reprimanding the employee for the lie.