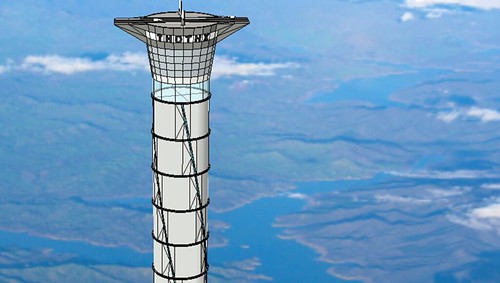 A Canadian company is developing a 20-kilometre-high “space elevator.”

The free-standing elevator, which Pembroke’s Thoth Technology recently secured a US patent for, could theoretically launch astronats into space.

A team has been working on the concept since 2007.

The elevator, say its creators, would offer a more energy-efficient method of exiting Earth.

Currently, a much smaller version—still 1.5km high—is planned to be built by Thoth to test the concept.

Space launches aren’t the only application for Thoth’s technology; the company suggests tourism, communications, and wind energy are all practical uses for such a structure.

Don’t expect it anytime soon, however—the demonstration tower might not be complete for up to five years, and the project’s total cost could reach $13 billion.