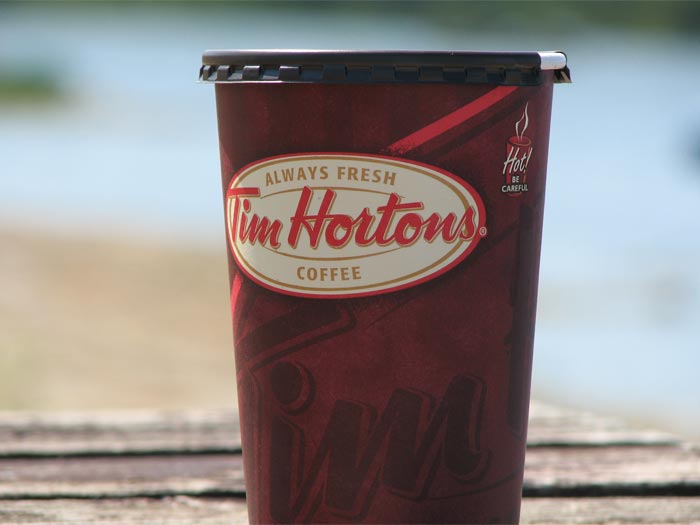 In an effort to remind web-savvy Canadians to stay caffeinated, Tim Hortons launched a new online photo sharing contest on October 1, called the Tims Photo Tour. It could be another small step in the right direction for the Canadian coffee chain that’s been a bit slow to take advantage of technology and social media engagement.

Entrants have been asked to snap a photo of themselves holding a Tim Hortons cup in any hometown setting and then upload it to the Tims website. The submission process also requires the photo to be geotagged to its location.

Tim Hortons has set up its own branded map online so that every single photo submitted shows up for anyone to view. The map uses data from Google Maps, so you can zoom in and out to get a closer or broader look at where each submission is coming from.

Photos are grouped together on the map and spread out automatically to their more specific locations as you zoom in. Viewers can leave comments on any photo and rate them using a five-star rating system (except the stars are actually coffee cups).

After just one day, there are already quite a few photos tagged to a variety of places on the map, and Canada will probably be covered by the November 11 deadline—with a good possibility of more submissions from places all over the world.

A tag in the Midwestern U.S. pulls up a photo of a man said to be originally from Stratford, Ontario standing in front of the Kansas state sign with a cup of Tims and Toronto Maple Leafs jersey right at the Kansas/Missouri border. Navigate to the other side of the world using the Tims map and you should see one very faraway tag from a member of the troops in Afghanistan holding an Iced Capp.

The contest is a good example of how geotagging is increasingly playing a significant role in social media. Instagram recently launched a very similar feature called Photo Maps, which automatically tags users’ photos to the location where they were taken. Some people predict that it could sort of be the equivalent of a “real-time Google Street View,” eventually.

So if you stick your own unique photo up on the map, you’ll be entered to win a Tims gift card worth $600, which will be awarded to 21 separate winners, and one grand prize of $5,000 for a trip to anywhere you want.

It’ll be pretty cool to see the map fill up with more photo tags from different places over the next month, and the geotagged map is a great way to encourage people buy more beverages and frequently come back to the map to see new photos.

It’s an interesting social campaign, for sure. Now if only we could get Tims to launch a mobile app payment system too.

At least the map’s coffee-coloured ocean water is kind of a nice touch.