With the rise in telecommuting, the mass popularity of paper-thin laptops and tablets, and of course Canadians’ everlasting love for coffee, where one goes to score free wifi—because one will go somewhere to score free wifi—matters.

Whether wifi is worth the visit is determined by the following criteria: ease to connect, quality of connection, speed of connection, and consistency of experience across multiple visits and different locations of the same brand.

The factor that is easiest to measure is speed, and it’s also the least subjective, so we decided to rank the three biggest nationally reaching cafés in Canada to determine who’s the quickest of them all. 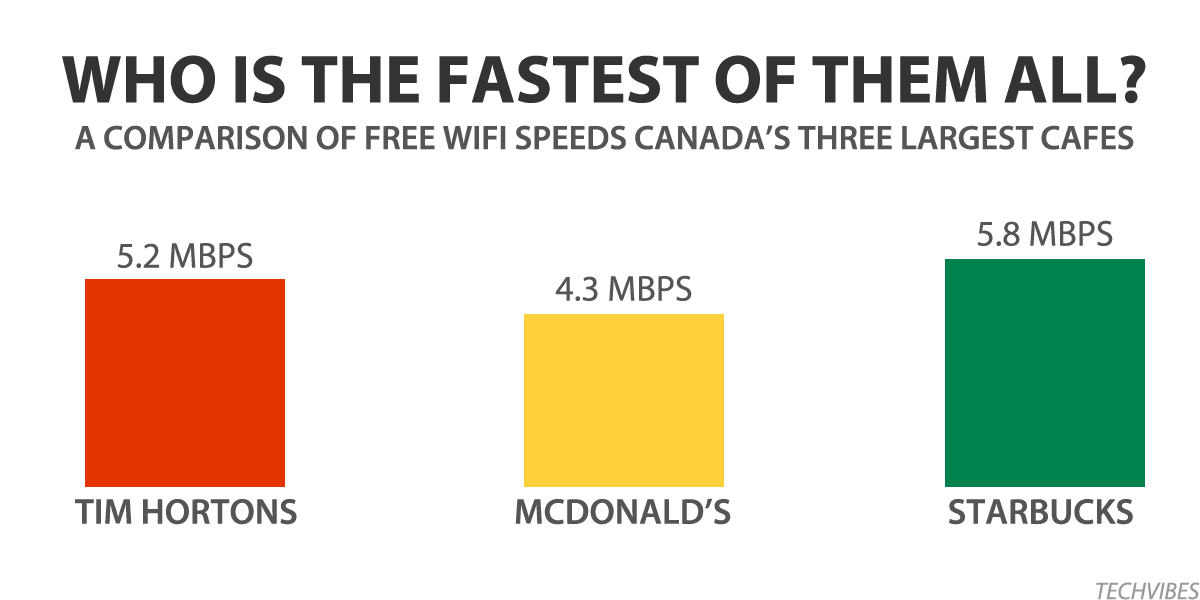 Timmys owns three-quarters of Canada’s baked goods market and well over half of the country’s coffee market, making it by far the biggest café brand in the nation. However, it was also the slowest to bring free wifi to Canadians, adding the feature as recently as 2012, years after Starbucks (2010) and McDonald’s (2011).

Bell Canada powers Timothy’s wifi, which averages just over five Mbps—slightly slower if you decline to offer the company your email, which it uses for seamless logins across locations (and, if you allow, promotional material in your inbox).

The second-biggest server of coffee with a 7% marketshare, free wifi at Starbucks became a thing in Canada in 2010. The coffee chain says no purchase is required, nor is any personal information needed to connect. The bean-brewing behemoth also uses Bell to power its internet, but manages to deliver a slightly faster average speed at nearly six Mbps. It’s a lot faster at certain US locations, which use Google to deliver up to 10 Mbps.

Only recently known for its coffee (which really isn’t that bad, at least to non-snobs), McDonald’s has been heavily marketing its McCafé menu. Free wifi is the perfect pairing for an iced coffee, the company believes, and offers its internet without any time limit—”come and use our internet for as long as you need” is essentially their motto. However, McDonald’s speeds lag others at a little above four Mbps.

A CAVEAT OR TWO

No surprise that the speeds are all similar given that all three are supplied by Bell. And it’s worth noting that while these speeds are averages taken across multiple days at multiple locations across Canada, expect your speed to wary widely based on location, how many people are using the internet at the time as you, and other general issues that seem to inevitably tie themselves to free wifi. And don’t forget: none of these wifi networks are secure.