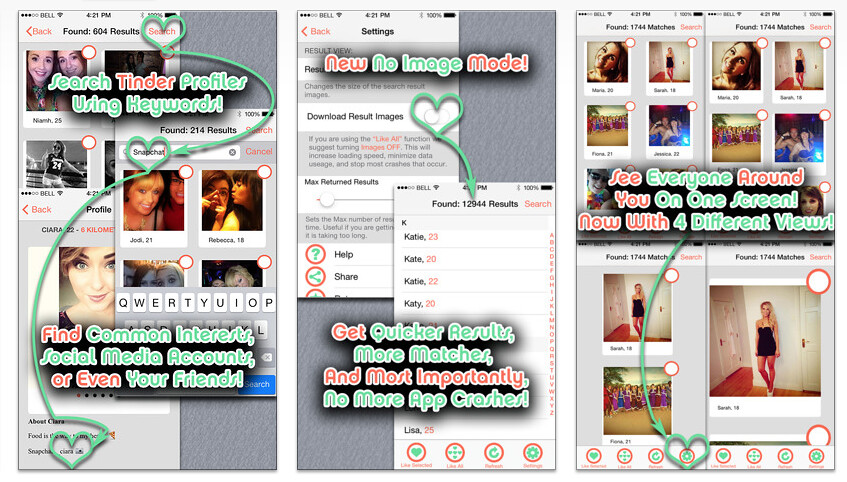 Mike, the creator of Tinderoid, says he was on vacation with two friends when he noticed something strange about the way they used Tinder – the location-based “hook-up app” famous for its “swipe to like” interface.

“They swipe right all the time,” Mike says. “They don’t even look at the profile pictures.”

That spurred Mike  to create Tinderoid, an app that “adds features [to Tinder] that we think are missing.

Among those features is one that should appeal to the most desperate members of Tinder’s user base: the ability for them to like everyone in their area. Mike says a use can like as many as 10,000 potential matches in a few seconds.

While it might be one of the more attention-grabbing features that Mike’s Tinderoid, for “Tinder on steroids,” adds to the popular “dating” app it’s not the only one.

And while Tinder doesn’t have an iPad app, Tinderoid includes support for the tablet’s larger screen.

“These are features that people are requesting and that they want,” says Mike. The app is currently available for iOS and has been downloaded over 100,000 times, he says, and has over 5,000 five-star reviews on the iTunes store.

An Android version is in the final stages of testing.

And Mike says new features are in the works. The next version to be released, which is set to come out early this week, will include an automatic mode.

“Every five minutes it sees if there’s anyone new in your area,” Mike says, and “it likes them all.”

The next version, which Mike describes as the “pro” version that will sell for 99 cents, will give users the ability to change their location. The idea, Mike says, is to allow users who are going on a trip to being messaging potential matches before they leave.

That way, he says, “you don’t waste any time when you get there.”

So who wants to like every potential match in their area without even looking at them? Well, the answer is pretty sad.

According to Mike, it’s users who say they’re “not getting enough matches.”

By allowing unsuccessful users to like everyone in their area Tinderoid is “boosting confidence,” says Mike. “They like to wake up in the morning and have 20 matches.”