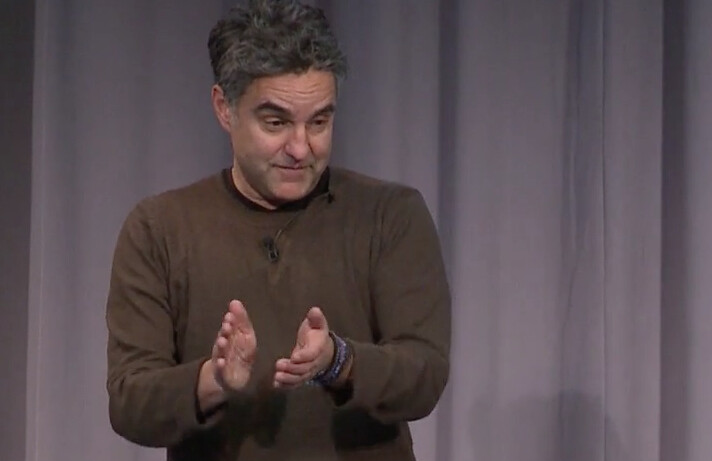 Bruce Croxon, a Canadian entrepreneur and former dragon on CBC-TV program “Dragons’ Den,” stopped by MaRS to deliver a down-to-earth, informative and fun lecture to an enthusiastic Entrepreneurship 101 crowd.

He offered a ton of advice on everything from how to tell if entrepreneurship is right for you to how to hire the right people to why pitching dog products on “Dragons’ Den” is a bad idea.

Bruce got his start as a co-founder of Lavalife, a business that started out as a telepersonals company, but turned into one of the first online dating networks. He attributes part of his success with Lavalife to being in the right place at the right time—the industry was ripe for disruption. According to Bruce, he also had the advantage of being a young person with no family commitments and an active interest in the company’s subject matter: dating.

Bruce is also an investor and advisor to early-stage companies and runs the investment firm Round13 Capital. The inspiration behind its name? The legendary boxing match between Joe Frazier and Muhammad Ali, known as “the Thrilla in Manila.” Round 13 is considered one of the most brutal rounds of heavyweight fighting. By the start of the 15th round of that famous fight, neither fighter could get off of his stool. After the fight, Ali said: “That’s the closest to death I’ve ever been.” By getting off of his stool Ali had won the fight.

According to Bruce, Round13 represents stamina and determination. He likes to invest in people who get back up after being beaten down. It’s inevitable that you’ll be beaten down, but not everyone can get back up.

Most people will recognize Bruce as a former star of CBC-TV’s “Dragons’ Den,” where he sat alongside some of Canada’s most successful entrepreneurs and investors. During his lecture, he dished about what really happens when you pitch on “Dragons’ Den” and what his fellow dragon investors are like in real life. (Watch the full lecture video below to learn more about that.)

Here’s a roundup of the advice Bruce gave during his lecture.

1. Pick something you love.

“Pick what you love,” said Bruce. “You’re going to have to work at it seven days a week, so you might as well be working at something that you naturally enjoy so that it doesn’t seem like work. If you’re not working seven days a week on your idea, someone else is—and they’re going to beat you.”

2. Define your vision and set goals.

Bruce stressed the importance of having a vision for the future and setting tangible goals. Avoid making five-year plans though, he said, as things move too quickly for that these days. An 18-month to three-year plan will do.

Setting tangible goals based on your vision is also critical for long-term success, he explained. Specific goals give you the ability to see where you are and whether you’re going to be able to achieve your vision.

3. Hire people who have the same core values as you do.

Don’t waste time and money by hiring someone who has the right technical skills, but different values than yours. Bruce explained that he once ended up regretting hiring someone because he had overvalued that individual’s technical skills and overlooked their values and fit with the organizational culture. Having a team of like-minded people who align with how you want to build an organization is critical for getting people to stand with you.

4. Recognize that teamwork is an important core value.

According to Bruce, when his team was hiring for Lavalife they brought all of the candidates into a room together. The candidates’ first task was to complete the NASA survival challenge as a group. After they were done they were asked to complete the challenge again, but this time individually. No individual scored higher than the team effort, he said. Bruce and his partners used this method to determine who was a team player and who was not.

Too many people pitch ideas that just aren’t needed, explained Bruce. “How many dog ideas do we really need?” he asked. “The second year [on Dragons’ Den], someone came out with a dog carriage for dogs when they got too old to walk.” Needless to say, the dragons weren’t impressed.

Bruce said that Abraham Maslow’s hierarchy of needs is a good basis for determining whether the world really needs your idea. When you find a need that exists, try to cover as many levels of the hierarchy as you can.

“Your first job is to convince me that there is a need. If you can convince someone there’s this need that they never knew existed and then here’s an idea that can fill it, it’s a double whammy,” said Bruce.

6. Collaborate rather than protect.

An entrepreneur asked Bruce what he would do if his competition came to him with a pitch to collaborate. “I believe we live in a time where there’s no such thing as an original idea,” he responded.

It’s important to understand that if you have a great idea, someone else probably has had it too. “Don’t waste time on protecting what you have that no one else has, or you think no one else has,” said Bruce. “If collaborating with a competitor allows you to get there faster, I’m all over it. You’re going to find out what they’re doing anyway, so you may as well do it now. Protectionism is the exact wrong way to go about building a business.”

For more of Bruce’s insights, check out the video from the lecture.

This content, coauthored by Jordan Adams, first appeared on MaRS.