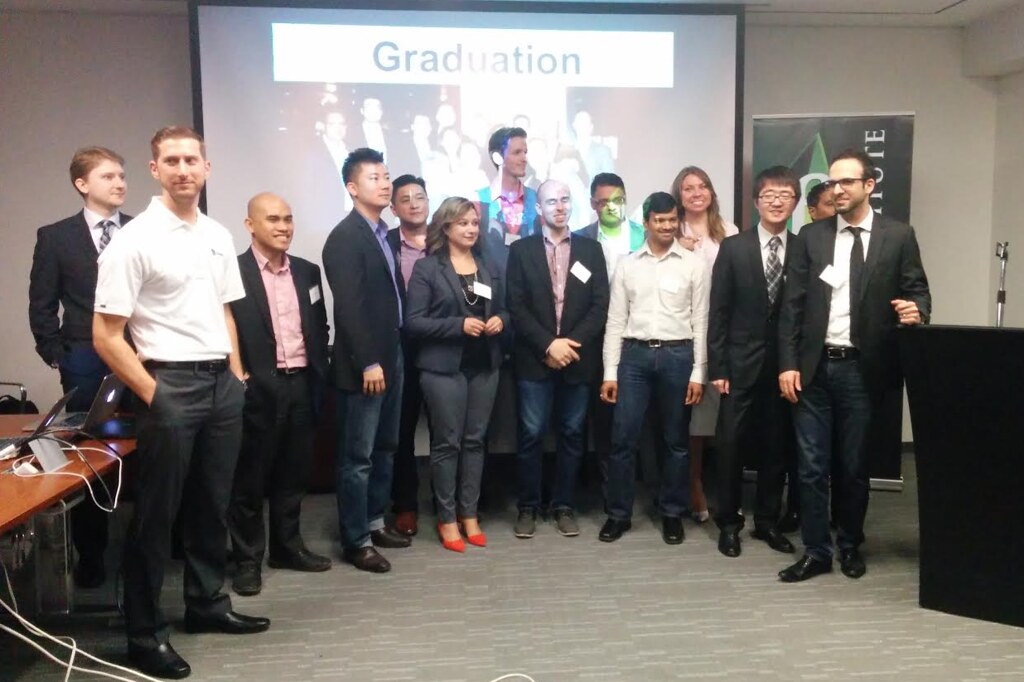 The Toronto Founder Institute celebrated the graduation of their second cohort ever today at the Weir Foulds office in the Toronto-Dominion Tower last night.

With the launch of the Toronto chapter only nine months ago, the largest accelerator in the world hopes to give Toronto startup founders intensive business-building experience through a four-month curriculum and access to mentors – including Allen Lau, CEO of Wattpad, and Andrew D’Souza, President of Bionym – and is among 80 other Founder Institutes around the world.

“This is why I love this program; it’s so international,” says Sunil Sharma, managing partner of Extreme Venture Partners and one of the directors of Toronto’s Founder Institute. “It takes the very same curriculum and the very same methodology that applies to a startup in the Valley, San Diego, California, and applies that rigor on a worldwide basis.”

For this cohort, 225 people applied, 99 people enrolled, 58 made it past the first week and only 14 graduated.

“It’s so hard that only 14 graduated tonight when 58 started,” Sharma says, adding that it shows how intense the program is. “Those numbers are consistent worldwide.”

As almost 120 shuffled into the room to celebrate the milestone – including some founders from the first Toronto cohort – the evening started with networking, drinks and hors d’oeuvres before getting into pitches from the 14 companies that graduated. The markets that the founders hoped to disrupt spanned across industries – they stemmed from companies like CubbySpot, who help connect parents to child care services in the area, to Airvinci, a helicopter that allows skydivers to skydive from 1,200 feet.

An especially interesting aspect of the graduation was how much some of the startups spoke to the diversity of the Toronto population; as people increasingly turn to technology to make their lives easier, some founders realized that the markets used by ethnic communities were largely untapped. Mywedhelper is a personalized “wedding concierge” that connects South Asian couples to local businesses that suit their needs – though their founder, Neeti Passi, is currently focused on South Asian weddings, she realizes the potential her company has for large Italian and Chinese weddings in the future.

There was also JumpPoints, a loyalty program for small and medium-sized businesses in the Chinese community; and Cartly, a platform that gives South Asians home ordering options and delivery from their local South Asian grocer – a service that is common in their home countries.

Before going to back to more networking at the end of the night, the pitch session ended with a speech from the second cohort class president, Sam Henechowicz, the founder of the Clubio mobile platform that that connects members and staff at sports clubs.

“The Founder Institute globalizes Silicon Valley,” Henechowicz says. “Just take a look around this room, what a better place than Toronto to show global diversification?”