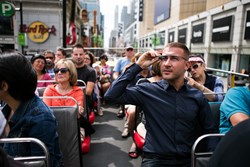 Toronto may be the most Google Glass-friendly city in the world with the launch of three new apps that enhance living in Canada’s largest city.

Glass Explorers in Toronto, and those visiting the city, are now able to get restaurant suggestions from Yelp, check on TTC transit times, and find nearby bikes for rent at BIXI stations using Google Glass.

Making Toronto Glass-ready was a dream of Canadian Google Glass Explorer (and Techvibes writer) Tom Emrich, who has been wearing Glass for about two months now.

“When I first put Glass on, I was overwhelmed with the potential this device has in changing our everyday lives,” explains Emrich in a press release today. “I had a dream to make Toronto as compatible with Glass as possible so that when this thing hits the market, people will really understand why wearable technology is the next step in our technological evolution”.

SEE ALSO: A Canadian Glasshole: Google Glass Represents the Future, but as a Tool or a Toy?

Emrich is the creator of two Glass apps both first-of-their kind in the space. He worked with digital agency, SplitElement to develop the applications using the Mirror API provided by Google to create Glassware for the device.

Glass Eats is the first Restaurant Finder for Glass powered by Yelp. This app was originally conceptualized as part of the Canadian Google Glass Hackathon which took place last month.

The Glass Eats app uses the Yelp API to generate its results making this app useful not just for Toronto, but for any location in North America. Users can ask for restaurant suggestions for places nearby or by restaurant type, like Burgers or Thai, using the devices location. When they do, they will be sent five restaurants according to their request and can either call or get directions by tapping on a restaurant card.

To help them get there, Glass users in Toronto can use the only Toronto Transit Glassware cheekily called Stay Glassy, TTC. With this app, transit-goers can check on the estimated arrival times for the nearest TTC bus or streetcar using Google Glass. This Glassware uses the City of Toronto’s Open Data API to provide real-time results for transit around the city.

“Transit and restaurant recommendations are two must-have features for Glass which were missing before these apps,” said Emrich. “It’s great to be able to bring these apps to the Explorer community to add to the rapidly growing directory of Glassware for Glass”.

Fellow Canadian Google Glass Explorer and independent game developer, Macy Kuang, created and developed the BIXI bike-sharing app for Glass. Aptly named BikeShare, this Glassware gives users information about nearby BIXI stations by letting them know how many bikes or docks are available. This app aims to help bike-sharers make quick decisions on where to rent or drop off bikes around the city.

Emrich and Kuang are two of only ten Canadian Google Glass Explorers in Canada.