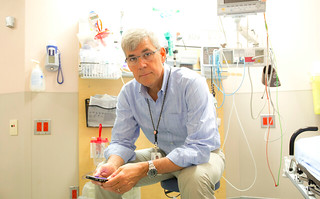 Researchers at Mount Sinai Hospital and the University of Toronto have launched the world’s first reported mobile app to help diagnose and treat alcohol withdrawal.

They unveiled the app last week at the International Conference of the IEEE Engineering in Medicine and Biology Society in Chicago.

“We think it has global implications,” says Dr. Bjug Borgundvaag, director of Mount Sinai’s Schwartz/Reisman Emergency Medicine Institute and one of the creators of the app. “Alcohol withdrawal is commonly encountered not only in the emergency room, but also elsewhere in the hospital, and this gives clinicians a much easier way to assess patients using real data and can improve patient outcomes. Everyone seems to have smartphones. This is highly accessible.”

Clinicians don’t want to underestimate patients’ symptoms; and at the same time, if they over-prescribe psychoactive medications – benzodiazepines like Valium, which are common to treat alcohol withdrawal — it could cause serious complications, such as respiratory infections, he says. “It’s hard for clinicians to have confidence that they can accurately measure withdrawal symptoms.”

One common way to diagnose and treat alcohol withdrawal is through the Clinical Institute Withdrawal Assessment (CIWA), which uses a scale to measure symptoms of withdrawal ranging from nausea and vomiting to tremors. But Dr. Borgundvaag notes it can be subjective as it relies on self-reporting.

And since CIWA takes about five minutes and must be done every hour, he says it’s time-consuming. “That’s a lot of time for one patient and for one task,” he says. “One of our objectives is to see if it’s possible to come up with a shorter, more user-friendly tool to treat alcohol withdrawal and make that available for clinicians.”

So, he and his research team, which includes physicians at St. Michael’s and Women’s College Hospitals and researchers from the University of Toronto’s Department of Electrical and Computer Engineering (ECE), developed the world’s first app, currently on iOS, that measures tremor strength.

Here’s how it works: the app uses data from Apple’s built-in accelerometer to measure the frequency of tremor for both hands for 20 seconds. The app also charts the consistency of the tremor. Dr. Borgundvaag explains that real patients will suffer high frequency tremors of seven cycles per second, while “patients intending to deceive the app tend to have lower frequency.

According to U of T, chronic abusers often claim to be in withdrawal to get their hands on benzodiazepines. “It can be difficult for inexperienced clinicians to determine if the patient is actually in withdrawal or ‘faking’ a withdrawal tremor. Front-line health care workers have no objective way to tell the sufferers from the fakers. But researchers hope to change that.”

And their efforts look promising. Dr. Borgundvaag and his team tested their app on 49 patients experiencing tremors at the Schwartz/Reisman Emergency Medicine Institute, St. Michael’s Hospital and Women’s College Hospital, and 12 nurses trying to mimic the symptom.

Clinicians filmed patients while using the app and showed the footage to doctors. The study showed that the “app’s ability to assess tremor strength matched that of junior physicians, while more senior doctors were able to judge symptoms with better accuracy.”

While the app is still in beta testing mode, the research team is indeed hopeful of its implications.

“We have just begun to scratch the surface of what is possible by applying signal processing and machine learning to body-connected sensors,” says Parham Aarabi, associate professor with the Department of ECE and one of the researchers. “As sensors improve and algorithms become smarter, there’s a good chance that we may be able to solve more medical problems and make medical diagnoses more efficient.”