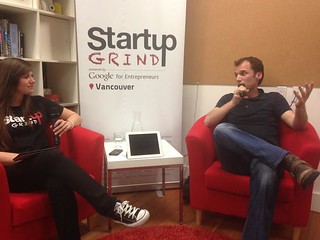 This was the first StartupGrindVan event in a long, long time that wasn’t set against the gloom of a rainy night. Between the sunshine and the excitement for the evening’s speaker there was an energy to the networking session before that hadn’t been seen in the two months prior.

A slight change to the layout of the event made a surprisingly large shift. The previous set-up staged the networking (and the beer) in a smaller, more intimate zone of the space—Wednesday night’s chat had the formal seating there instead, which lead to a pleasantly community-centric event.

GrowLab’s Jonathan Bixby was the speaker, and his talk fell somewhere between Ben Pickering’s and Brian Wong’s in terms of both content and delivery. Bixby’s main message was not his intended one. His initial positioning of the talk as an exploration of the roles that luck and timing play in determining a career proved half-true. The topics did come up sporadically through the interview. He portrayed his beginnings as ignoble—an attempt at a university education was derailed, at least in part, due to his fondness for The Dukes of Hazzard. Entrepreneurship was chosen when he was 23 out of youthful indignation more than anything else. Luck was established as the force that wound up guiding him to life in Vancouver. But it was his deviations from that plan that lead to valuable information for his audience.

His success in business led him to the chairmanship of GrowLab. And after years of asking for money, his perspective from an investor’s chair was priceless.

“You have to understand the time—the era that you’re in. The era I was in with Strangeloop was the last of the big ‘Here’s my plan, fund my plan’ days; in this era, it’s all about traction,” he explained. “I love the quote ‘Traction is the new IP,’ and I believe that’s true. And what that means is you can talk a big game, you can even be a serial entrepreneur, and I’m going to say ‘prove it.’ It means you have to show me some shred of evidence that you have thought about your customer and the economic driver, and modelled that out with real data.”

“My advice is traction—traction trumps everything,” he added. “Right now the era is lean startup, test, hypothesis: you have to play the game that every investor’s going to play.”

Other valuable information included what he believes leads a startup to failure.

“What I think a lot of startups fail on? They don’t think their numbers through,” he offered. “They see a million in revenue with one sales guy and an average deal of $10,000. I call bullshit on that—what does your pipeline look like? How many deals can you make a year? I can do the math in 20 seconds that you’re in trouble.”

“Financials are like trying to hit a moving target with wind, and that’s fine, but I’m testing the logic of whether you can think things through,” Bixby continued. “At the end of New Ventures BC, which is a great competition, you’re up there, and it’s Dragons Den-ish, and you have to show passion. You forget you’re an actor, and this is your soliloquy, and if you’re not performing and passionate and killing it, I’m not going to be passionate either.”

But he made a point to leave the subject of work behind by sharing the three principles of what made his past business, StrangeLoop, one of the province’s best places to work. The first was family—to take the time it took to be a good son, father, spouse. The second was measuring output, not input. The time in the chair was not the guiding principle—once the job was outlined in terms of output, there was no debate. The third:

Bixby undoubtedly has enough information inside of him for many more such interviews. As it was, the audience was left with more than enough to digest—not just from the sandwich platter. He stayed until nearly nine to answer as many questions as possible once the talk was concluded, and remained in the headspace of the Fireside Chat well into the packing up of the chairs.