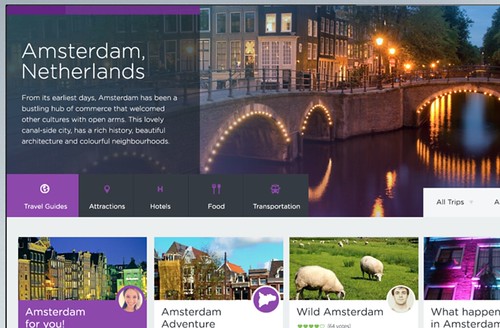 Travelabulous was made for adventure-seekers weary of generic travel sites that offer pre-packaged vacations.

Perhaps surprisingly, the product was dreamed up by two individuals with a background in enterprise software. Masha Krol and Kirk Munroe, co-founders of Travelabulous, worked at IBM but their paths never intersected. There, Krol focused on software development, while Munroe was in a marketing and product management position.

Shortly after Munroe started at Kinaxis, Krol joined, and the two successfully collaborated on a complex UI design project there. Munroe then set out to establish a venture, and asked Krol to join. They brainstormed problems that they wanted to see solved in the world before landing on travel planning.

“I’ve always wanted to do a startup,” says Krol. She adds, “Our skills align – Kirk is on the growth and financials side, while I’m on the product side.”

Munroe’s inspiration for a platform that would let travellers book customized vacations came after he planned a trip to Hawaii for his 20th wedding anniversary .While he was extremely happy with how the trip turned out, he conceded that the planning process took a lot of his time.

Krol’s own experiences with planning a multi-city trip in Spain made her realize how difficult it is to single-handedly coordinate multiple modes of transportation and lodging.

They were also frustrated with generic pre-packaged trips that every travel site offered. They established Travelabulous with the goal of enabling travellers to customize their trip by comparing a collection of curated community itineraries. The idea was for a person to customize their vacation by modelling it after a like-minded user’s trip.

Their background in enterprise software largely influenced the first version of the platform.

“When we first got into it, we built this huge, beautiful thing, but then pared it down.” They shipped the app in September of last year after months of market research and building the product.

They continued to iterate after an invite-only release, and grew their user base. In April, a travel blogger contacted them asking if they could create a visualization of their itinerary, on a map, for instance.

This led Krol and Munroe to rethink their strategy and undertake a pivot of sorts. Instead of targeting vacation-seekers directly, they’re now creating interactive visualizations of trips that travel writers can embed into their blog. There is an option for readers to customize the exact same trip, which takes them to the Travelabulous platform.

Krol and Munroe are positioning Travelabulous as a “platform for people to discover, customize, and book awesome travel blogger trips.”

Krol says they’re fielding inbound requests from bloggers, and have also built strong partnerships with travel writers. Ultimately, they want to be the must-have tool for travel bloggers that want to represent their trip itineraries in a more dynamic way.

“Our mission has remained the same: we want to help people travel more, better,” says Krol.