If you don’t live in Toronto you may be unaware of the recent PR snafu the Toronto Transit Commission (TTC) found itself in last month.  Well, yesterday, the TTC was back in the news.  This time for some good news.  Yesterday they unveiled their latest project (which is a little late in my opinion): TTC Trip Planner. 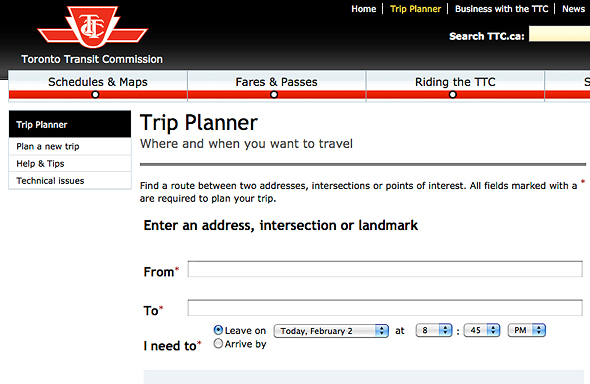 The Trip Planner, which is currently in beta testing, is supposed to allow transit users to properly plan a route between addresses in Toronto.  And being a frequent patron of the Red Rocket I decided to give it a try last night on my way to a Social Media Week event downtown.

It’s a fairly simple website to use.  The user is prompted to enter in details such as destination, starting point, and day and time of travel.  The site also features alternate suggestions.  So just in case you entered Bloor St. West instead of Bloor St. East you have the opportunity to correct it.

However, when it comes to the actual directions, I find it less than intuitive and not so user-friendly.  I’m used to MapQuest and Google Maps which gives me directions in a step-by-step manner.  For someone not used to traveling downtown, there might be confusion on which platform to enter and which side of the tracks one should stand at.

I did manage to get to my destination.  And I was on time.  Good job TTC.  Next step: SMS for every stop to find out bus schedule.  I’m just saying.