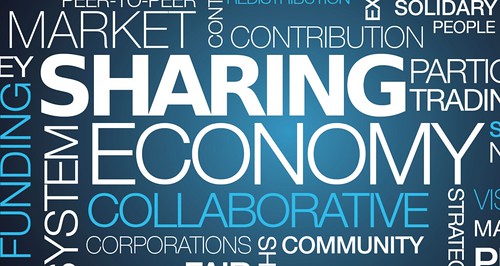 The title of this article seems a little bit confusing at first glance.

Uberfication and Micro-entrepreneurship have been thrown around as interchangeable terms, along with the “gig” or sharing economy.  The distinction between the two is small, but very important. It changes how companies operate when they articulate themselves as the Uber for X.

As a cofounder of MealSurfers, I ran into this debate of our company being the Uber for food vs the Etsy for food all the time.  Thinking about that aspect some more, I have realized what the real difference is.

When we think of Uber, we think of drivers with licenses, driving anyone who wants to around the city.  Uber has coined itself as a ridesharing platform, to allow people to easily go from place to place.

But what is the central problem Uber is solving? Is it providing employment to all drivers?  Or is it finding the best way to transport you, or the goods you want (Uber Eats) from one place to another? I think it is the latter.

Uber’s central mission, as Chris Sacca, an early investor in the company writes, is to make “transportation as reliable as running water, everywhere for everyone.” Think about that for a second.  There is no mention of driver empowerment, or creating new jobs for the economy.  It is simply, creating the best means to go from point A to point B.  It is no wonder Uber is experimenting with driverless cars.  Maybe 10 years from now, the same taxi drivers, who are rioting against Uber for eliminating taxis, will riot against Uber for eliminating drivers.

Contrast that with Etsy, a marketplace where you can buy handmade goods from people all around the world. Etsy’s central mission is to “reimagine commerce in ways that build a more fulfilling and lasting world.” As an ex-RBC Payments Innovation employee, I can tell you commerce is defined as a social process between two people. The whole benefit of Etsy is the ability to buy people’s creativity and appreciate their value. The people that sell on Etsy, are therefore micro-entrepreneurs, not merely pawns in fulfilling a larger vision.

This distinction between companies like Uber and Etsy is very important.  It leads to the two types of divide in the sharing economy.  One that promotes a larger goal by using people, and another that promotes people by having a larger goal.

Why is this important?

Simply put, the sharing economy is growing.  In almost every industry, people are finding ways to leverage each other for their values.

You may have thought of your own sharing economy concept.  Why wouldn’t you? It is one of the hottest investor trends right now.   Startups in the space allow people to share anything from plumbing skills, technology help, cash, local items, and many more.  Many of these can be viewed as a little excessive, but they are all very important in pushing the envelope of what technology can do for us.

For me personally, food was always interesting. If you live downtown, you’ll realize there are three food options at your disposal.  Either you cook yourself (presuming you know how, and you have time), go to a restaurant/order delivery (spending money and time waiting), or eat fast food (accepting unhealthy and processed ingredients).  It made sense to build a platform, which empowered local chefs or people that can cook to sell their foods to people within their own neighbourhood or community.  These meals would be healthier, cheaper, quicker, and you would know the person who made the meal just for you.  It was not until people assumed it was like the Uber for food, that I realized that this was not the case.

How to distinguish between sharing economy companies

I asked myself what separates Uberfication and Micro-Entrepreneurship and came up with a list of X questions.

3. Does the consumer care who provided the good or service? Frankly, I am indifferent whether Stacey drove me in her car via Uber, or Ahmed.  It only matters that I got there on time.  I do care if Bob made me this amazing vase or Salima put together my jewelry.

4. Who promotes the business? For Uber, it is the company that tells people to use their platform.  I don’t see many Uber drivers asking me to sit in their car and pay through the phone.  In Etsy however, people promote on Facebook and other channels about the products they are selling.

5. If the service ended, how would the same value be recreated? In the case of Uber, drivers would go back to driving taxis, or not drive people around at all.  It is obviously hard to imagine the end of Uber now, but the value could not be recreated, unless a similar company took its place.  If Etsy ended, the sellers would not disappear.  They would keep selling via other channels.

When I look at MealSurfers, it is the same sort of questions I end up asking myself.  Our mission is to provide a platform for local chefs to sell their food to anyone who wants to buy it.  The chefs set the price, meals, and order/pickup times.  Consumers see who made the food, and care about the source.  We help the chefs promote their business, and we promote it ourselves.  Finally, chefs have been doing this before, and they will continue to do it whether or not we formalize it.

As a result, we are not the Uber for food.

Irrespective of what the future holds, there will be more companies in this space.  Some will try to emulate Uber, while others emulate Etsy.  I think many will also be shut down.  As you read this, I encourage you to have an open mind about companies in this space.  It took Uber $20 or a free ride to convince you to accept their services.  Not all startups will offer that benefit at the onset, but they will be just as valuable.  As Canadians there are numerous ways to create value for each other, if we keep collaboration top of mind.

Check us out at MealSurfers if you’re a hungry Torontonian.