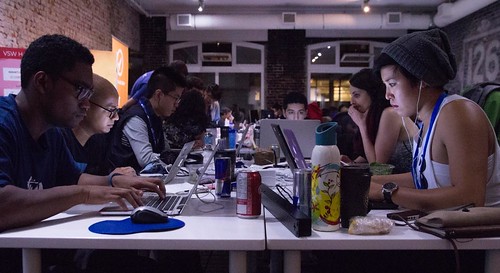 Saturday was a great day to attend the Vancouver Startup Week because of the diversity of events that took place.

One event that I attended was the #VSW2015 Hackathon, which took place at The Hive in Gastown. The location was appropriate because the building is a thriving Startup hub in Vancouver with office sharing space The Hive on one floor housing multiple startups, and one floor up is Launch Academy who provides early stage entrepreneurs with education and mentorship. I’ve learned after attending all the #VSW2015 events that these two hubs are a big part of creating a community that is cooperative and inspired.

The Hive was buzzing with excitement and energy that was mostly adrenaline coming from the participants who had be working tirelessly on creating a working and innovative product in 24 hours. The three Judges were John Boxall, CTO of Mobify; David Hobbs, Director of Development of Two Tall Totems; and Brad Lowe, VP, National Accelerator Operations of Wavefront AC. The Host was the funny and entertaining Ian MacKinnon, cofounder of Latergramme.

John Boxall, who is CTO of local industry giant Mobify, one of the three Judges, explained to me that there were participants who were coming out for the very first time and you have people who have been doing it for a long time. He explained some tips on winning a hackathon including that you need: a diversified team, somebody to think about the business aspect, someone to build a product that actually works. Boxall appreciates that people are willing to take the risk given that in 24 hours you really could fail, but he thinks it’s great that the community can celebrate what the team created if it means celebrating the “failure.”

Boxall and I discussed the diversity and spectrum of approaches by comparing two startup entries, Charm whose idea was decentralized book lending versus FuckMarryKill, which enabled users to look at people’s photos and swipe up (to marry them), swipe down (to kill them), or click on them (to fuck them). Both projects were completely different in that one was essentially a passion project for book lovers, while the other one had the potential to be a viral gimmicky app.

For everyone that was waiting to find out who won and read this far, three prizes were given out to the top three groups. To determine the winners, the Judges used two criterias, 1) how are they thinking about technology and how much did they manage to build, and 2) was this a viable business.

First prize went to Medical BNB, won $5,000 in cash from Wavefront AC, $10,000 in kind from Two Tall Totem for further developing their concept into a mobile app, and $10,000 in kind for video development from Pushr around the concept. Their concept was strong from a business aspect and on the technical side they had a good site.

Kyle Johnson, the founder, explained that in the US alone, it has become a 50 Billion dollar Medical tourism industry and it’s growing at a rate of 25% annually. The purpose is to provide a simple and cost effective way to purchase healthcare services abroad. The revenue model was based on Medical BNB getting 20% per transaction.

Second prize went to WonderPath. They won Canucks hockey tickets. One aspect that the Judges appreciated is that the demo included real data to illustrate how their product functions. The coders integrated the Instagram API into their product. WonderPath asked you “What do you like?” with a set of images to choose from. In the demo the user was choosing beers by clicking on a set of Instagram beer related photos, which then led to a google map being produced with local breweries or beer venues being connected together in a path.

Third place winner was “Three In a Row.” They won $250 worth of Guusto gift certificates. The Judges thought they had created an app that looked like it really worked, and they had a great live demo. Boxall thought it felt very close to something that was a product. Three In a Row offered a renovation service that enabled people to find handypersons to be hired for quick jobs. Contractors would choose a channel such as painting and add themselves in that category to come up in user searches.

Other hackathon teams included Uplift, a fitness web platform where fitness coaches connect to aspiring fitness enthusiasts; SparkWild, a Tinder for outdoorsy people looking to go hiking, biking, and more; and Tamatimer, an animated productivity app to encourage people to not use their cellphones.