As a publicist with Universal Music, Griffiths pursued an MBA in France, thinking she would lead a media company someday. Being in a new environment and having what she calls “space to breathe” completely changed her mindset.

Griffiths came out of the program with a business idea: leakproof underwear for women—a concept she fell in love with, but wasn’t sure women would actually buy. She called the company Knixwear—a play on the words knickers and nix—and officially launched the high-tech absorbent underwear through crowdfunding in 2013.

Two years into the business, Knixwear added a new product to the lineup. The 8-in-1 Evolution bra set a Kickstarter record for the most-funded fashion project of all time raising $1.6 million in 40 days. With that, the brand went direct-to-consumer using Shopify to sell their intimate apparel.

The company is on track to surpass $20 million in sales this year, 97 per cent of those from their website. A Knixwear product is purchased every 25 seconds, making it one of the fastest growing brands in Canada.

The 25-person company recently moved from a basement office to a 10,000-square-foot space in Toronto’s trendy Queen West; a necessary move to house a team that Griffiths expects to double in six months. 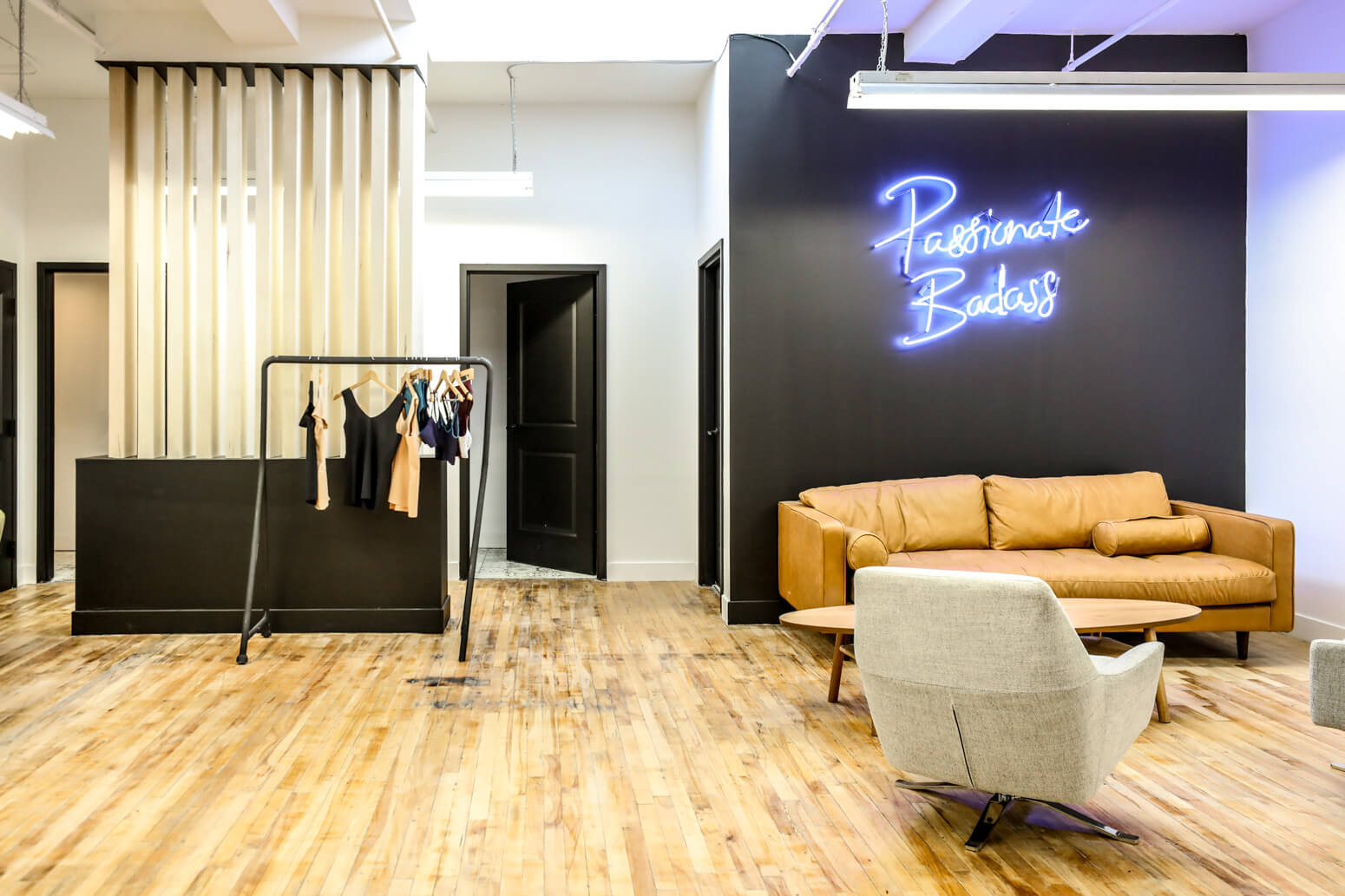 Selling clothing online, let alone intimates, presents a lot of challenges. How do you manage that barrier?

It’s hard. It’s really challenging. Having better representation in our marketing and showcasing what the product looks like on a wide variety of women has definitely helped us.

We answer a ton of questions too. At the moment, we are behind on customer service because we get asked so many questions all the time. Right now that is something we can’t outsource, because the level of support that we give each customer, I don’t think you can remove that from HQ.

Naturally, we have to have a really flexible return and exchange program. One in 10 customers that buy from us requests a return, but the industry average is closer to 30 per cent for the online shopping of intimates. We’re doing better than the average.

Our products are also designed to be flexible. Instead of having 30 sizes, we have eight that provide the same kind of flexibility.

What was the opportunity you saw in the market when you launched Knixwear?

I interviewed hundreds of women throughout my MBA, and I became obsessed with my idea because I spoke to so many women about it. And the two things I consistently heard were that products weren’t designed for real women in real life. Firstly, in the case of leakproof underwear, there wasn’t anything suitable for women and their bodies, despite the fact that one in three women experience leaks. So there was a problem on the product side.

Second, I kept hearing things like, ‘I hate Victoria Secret’s marketing’ and ‘only seeing thin models makes me feel bad about myself’ and ‘I can’t relate to this.’ This was in 2011, Instagram was just starting up, and this was before you had #selflove and #bodypositivity, but if you listened, you could pick up on the fact that women were frustrated.

I have always trusted my gut and gone with what feels right, not necessarily what is logical. I’ve never not gone for something before, and I had a feeling that if I didn’t go for it, I was always going to be asking myself, ‘What if?’

Knixwear started with a very niche product that didn’t yet exist on the market: great looking, leakproof and absorbent underwear. It was taking leakproof technology and putting it in underwear in a way that was attractive, seamless, and that women would want to wear and feel confident in. That product at the time didn’t exist.

The Kickstarter campaign was record-breaking. How did you manage all $1.4 million of those orders?

I was super reluctant to do the bra campaign. Crowdfunding campaigns are hard. Now looking back, it is a really intensive sprint to get sales. And then you spend the subsequent several months running on a treadmill making absolutely no progress, not making any further sales, just trying to fulfill the sales that you had months prior. And you look back at the year and you had an amazing 30-day period, but then you are exhausted because you spent a year running and staying in the same spot.

It took nine months to fulfill all the orders, partially because our campaign offered exchanges on sizes, which most Kickstarter campaigns don’t. But that was me trying to make everybody happy, and underestimating the consequences of that decision.

You started the company by wholesaling to bricks-and-mortar stores. How has the online business changed things?

Going online changed everything. It made it a business that I really enjoy. I didn’t love the wholesale side of things. It didn’t make sense to me. I sell, I can hustle, I can charm the pants off of someone, but it was just so dependent on a buyer’s mood on a particular day. There’s no way to forecast against it.

You’re also relying on a third party to tell your message and communicate your passion.

Now, we get to tell our own story, make our own internal policies and thought processes on how we want to handles things like returns and exchanges, and we get to be super innovative. We also get to track how we’re doing every single day, make changes, and track again.

We still have a couple hundred retailers across Canada and the U.S. selling Knixwear products. Those are boutiques and select partners that have been selling Knixwear for over two years who were open and wanting to continue to work with us on our terms.

You just won ‘The Disruptor’ at Shopify’s Build a Bigger Business contest. How has Shopify empowered Knixwear to scale?

Shopify is the most brilliant gift. It has meant we could build an e-commerce company without having an ounce of technical expertise full-time in-house. Three weeks ago we hired our first developer. Shopify’s platform replaces a CTO. They already put in all of the work on the product side and created something that is really intuitive and easy to use.

Five years ago, when we launched Knixwear, it was common for direct-to-consumer brands to raise a lot of money through venture financing then build huge platforms on rails from scratch, and have this bulky, heavy technical overhead. And we don’t have to do that.

Your company has seen tremendous growth in the last ten months. What’s been the biggest challenge in managing a growing e-commerce company?

Learning how to let go.

Our team has grown from five to 25 people since January. So my role has changed dramatically. I used to touch everything, and probably for worse, not for better.

Now, my role is making this transition from being this doer—going through those periods where I would grind it out for 18 hour days—to someone who’s focusing on hiring the right people and empowering them to be independent thinkers.

We just went through a process of hiring our executive team; finding people who have great expertise, who know what they are doing and have done it before. Each market has their own challenges, but it was a hard search because there aren’t a ton of fast growing e-commerce companies in the country, let alone Toronto. So we had to balance hiring for experience and hiring for ambition.

The decisions I make now are more important than ever. The amount of confidence that I have to have in those decisions, I can’t waiver anymore. I can’t take three years to decide that we’re not going to do wholesale. I have to be more assertive.

What is your big dream for Knixwear?

We want to build the best, most disruptive intimate apparel company that has ever existed. And in the process change lives and empower millions of women.

Intimate apparel products are literally the first thing you put on and the last thing you take off. It is something nobody else really sees except for you. For years, women have been wearing products that they think are sexy, products that perk you up and push you up. On date night, that’s awesome. But for everyday life, we choose to wear products that can inhibit us.

From the women that buy from us, we saw it’s not about age, it’s about making a choice to put your comfort and your confidence first. That only comes with letting go of the bullshit.

I started Knixwear when I was 28, and I had a ton of insecurity about my body. I was so hard on myself. The only reason why I am a different person today is because we’ve had hundreds of women do these photo shoots with us and I’ve seen women of every shape and size own it.

I know what it is like to be so hard on yourself. And we can do better. Every woman is worthy and I just want every woman to realize that.