Twitter started out as a platform for users to share messages in 140 characters or less. Although the company’s role within the social space is quite different today than when it debuted 11 years ago, Twitter remains an information sharing powerhouse—still with the signature character limit.

The San Francisco-based company set up its Canadian arm in 2013 to take on the important role of testing engagement strategies and platform products. Dubbed #TheLab, Twitter Canada is home to several platform firsts.

When an appetite for Canadian-specific data became apparent, Alyson Gausby was brought on board. As Twitter’s head of research, Gausby manages a small team that leads Canadian-specific research and localizes global research, giving the Twitter market a much-needed Canadian lens.

Gausby came to Twitter Canada in 2015 after leading consumer insights research for AOL and Microsoft, and following a stint at global research agency Ipsos in London, England. It was during her time at Microsoft when Gausby garnered attention from the New York Times and Time Magazine, with her report concluding that the human attention span is shorter than that of a goldfish. 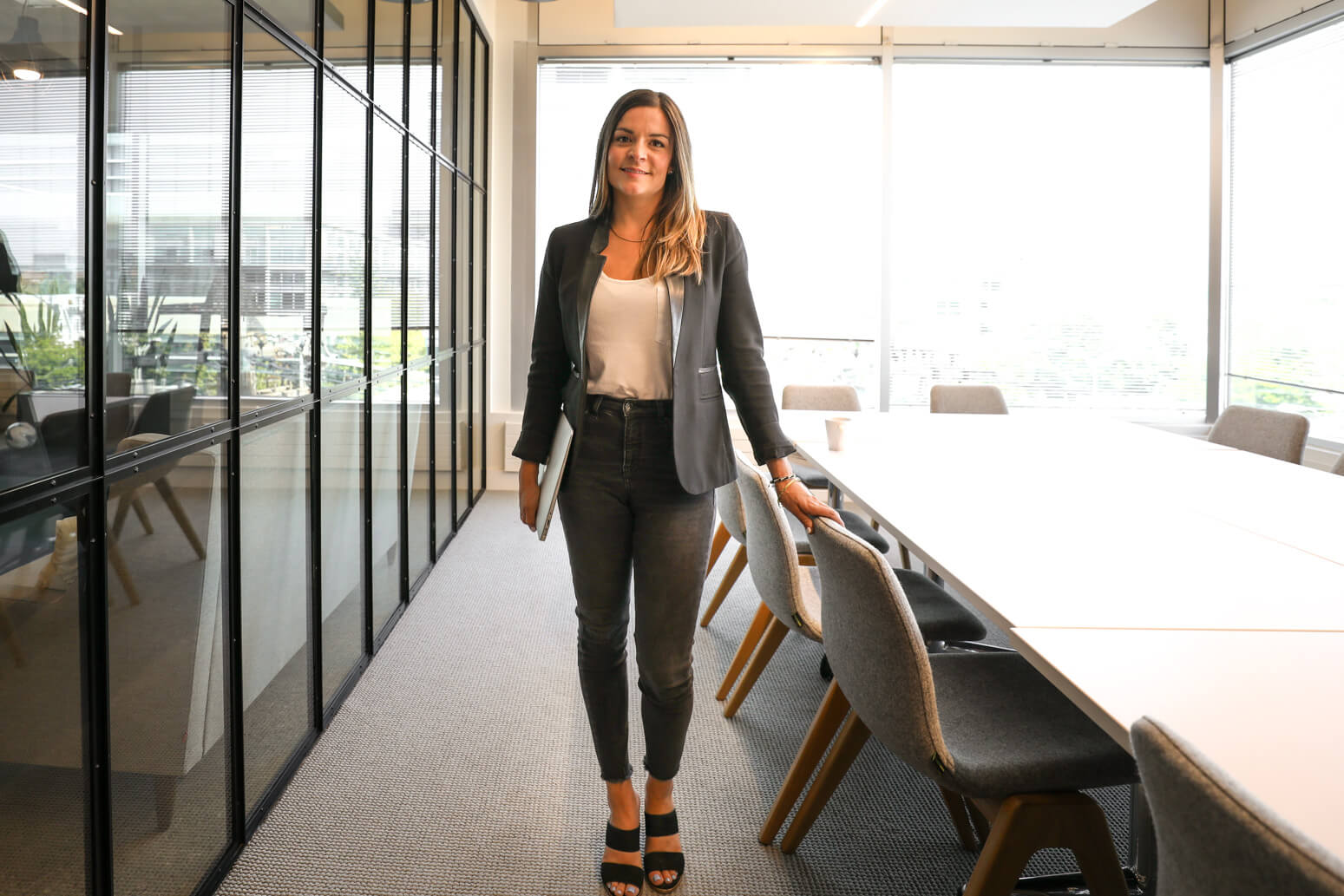 What did the study about attention span reveal to you about online behavior and media consumption?

You hear a lot of talk about digital natives and how they have shorter attention spans. I wanted to either prove or disprove that if you grow up with access to all of these devices, if it fundamentally changes the way that you interact with content and the way that you process information, or if it’s more so a learned trait.

That’s the scary part that we always talk about is that our attention spans are diminishing. And it is true in that respect. But the really interesting thing that we found is that we’re actually training our brains to process information more efficiently, particularly in the short term.

So if you’re viewing some content for a short period, people who consume more media or spend more time on social media have these bursts of high attention in the short term and that allows them to process information more quickly. You’re training yourself to vet information better and dig into the stuff that interests you most.

What challenge and opportunity do these shorter attention spans present for Twitter?

We do a lot of research on our research. So we dig through the results of all the campaign evaluation studies that we’ve done to identify trends and best practices to help our clients make more impact with their advertising.

It’s things like having an early hook or an early story arch in a video that significantly increases ad impact. So the learnings that we can pull out from our studies help our advertisers understand what works really well on the platform.

How does your background in consumer insights shape your thinking as Twitter’s head of research?

We’re all people, right? So, fundamentally we’re all looking at consumer behavior. I think where my roles in consumer insights at Microsoft and at AOL really help me is translating the data that we’re either mining from internal databases or getting from third party vendors into actionable insights for our advertisers.

Data without context is just numbers, it doesn’t really mean anything. Context without data is just a feeling, so you can’t really prove it. So, you really need the combination of the two of those to be impactful.

One of my favourite Twitter stats is that a tweet may be only 140 characters but there’s over 100 data points that are included in that, for every single tweet for the past 11 years. That’s a lot of data, which is a data lovers dreams.

What trends in Canada’s digital ecosystem are driving your research right now?

Video is a huge growth area for us. We’ve seen over two times growth since last September in terms of video views on Twitter. We know that video performs really well on a lot of the brand effectiveness research that we’re doing on the platform.

We are used to using social listening tools that look purely at conversation volume. It is great to know what people are talking about in real time, I like to call it the world’s largest focus group. And a brand definitely wants to keep a pulse on that.

But about a year and a half ago, we hired a CMO for the first time, Leslie Berland. And one of the first things that she did was do a lot of research into how and why people use Twitter. We needed to come up with a brand value proposition.

We found that Twitter is a source of news and information for people. It’s essentially a way for people to see what’s happening in the world and whatever it is that they’re interested in, whether that’s news and politics, sports, the Oscars or the Junos, or even what their favorite celebrity is doing.

My team has recently started to dig into search data which has been really interesting. We recently launched a piece of research that looked at the synergies between TV and Twitter. We looked at how Twitter is helping the evolution of the TV viewing experience and why people are using Twitter in conjunction with TV. From that study, we found that more people are searching for information about the TV programs rather than tweeting about it.

There is all of this activity that’s happening on the platform that we’ve never really looked at before. It makes sense, given that we know people are coming to Twitter looking for information. When you search on Twitter, the results that you get are very different than using a search engine because a Twitter search returns what is happening in the world right now.

Considering Twitter’s evolution beyond a social network, how do you perceive the platform’s position today in comparison to the other tech giants?

When Twitter was created it was essentially a way for you to text the world. One of its key benefits has always been just how quickly you can disseminate information. So, I think that with the new positioning—the ‘what’s happening’ tagline—it does get back to that start; it is the best place to get the most up-to-date information.

We now know that people come to Twitter with a very different mindset than other social media platforms. It’s very much an information seeking and discovery sort of mindset. Even if you look at where we are in the app store, we’re no longer a social media app, we’re a news and information app.

That has a significant impact on how people perceive the relevance of advertising on the platform. It’s seen as less intrusive. And because people are sort of more receptive to the messaging, we also see significantly better results for memory encoding, which is a neurological measure for how likely you are to remember whatever it is you’re viewing.

How do Twitter users engage with advertising on the site?

We’ve done neurological research that gives us three metrics: engagement, emotional connection, and also memory encoding. What we’ve found is that on Twitter, people pay as much attentions to the ads in their feed as they do to the other content. We tested this competitively and it wasn’t the case for other platforms. But on Twitter, it is truly a part of the native experience.

We did some research a little while ago that found half of users report that they haven’t seen an ad on the platform which is interesting and quite startling because anyone who has ever logged into the platform has seen an ad. It’s the second tweet on your feed. That just speaks to the quality of the ads that our partners are publishing.

What patterns of behavior are you seeing on Twitter?

That’s one of the things that we found in the TV and Twitter research is that people felt that when they were using Twitter while watching TV there was this sense of community that they could tap into, like it was a shared experience, like they weren’t watching alone in isolation.

Twitter is fundamentally different than other social platforms because it’s very much about look at that, versus look at me.

So if we look at the top types of content that people are sharing and engaging with on the platform, it’s current events, it’s sharing opinions about what’s going on in the world, so social and political events. It’s TV, it’s celebrity news. It’s all of those things before people are posting about themselves or their friends or their lives, which is fundamentally different than if you look at an Instagram or Facebook, which is very much about projecting yourself and who you are to the world.

Speaking of other social networks, we see those platforms mimicking one another’s features, while Twitter hasn’t. Why not?

I think that they serve fundamentally different needs in our lives. Facebook is great for staying in touch with friends who are down the street or across the globe. Instagram – how else would you share your trip photos? But Twitter is different because it’s not as much about me and my life as much as it’s about my opinions. It’s a way for me to see what’s happening in the world in whatever it is that I happen to be interested in.

Not only that but also to see different perspectives on an issue as well. So, if you get all of your news from a single source, you get one opinion, one viewpoint. On Twitter, particularly if you’re looking at Moments which is like a collection of the top or the best Tweets, it’s curated by a team in-house. You get all sorts of different perspectives on a topic, which as a consumer, makes me feel a lot more informed.