Venture capital investment in Canadian companies rose to a 13-year high in 2015, according to Canada’s Venture Capital & Private Equity Association.

A total of $2.3 billion was invested in Canadian companies during the year, a 12 per cent increase from 2014, according to data released by the industry association on Monday. It’s highest level of investment recorded since 2002.

Those investments were spread out over 536 deals. 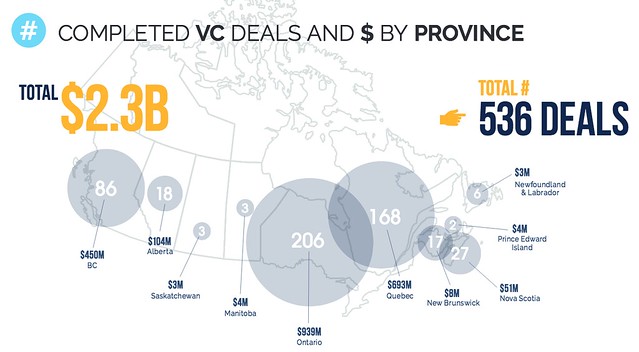 “Venture capital investment is going through a much needed resurgence in Canada,” Mike Woollatt, CEO of the CVCA, said in a release. ”The future looks brighter as exits climbed through 2015 and fundraising numbers were strong, thanks in large part to government activity on the fund of funds side.”

The increase in investments was largely driven by strong performance in Quebec. $693 million was invested in Quebec-based companies in 2015, up from $295 million the year before.

The largest deal of the year was also recorded in the province: $79 million raised by Montreal’s Lightspeed POS in September.

Ontario, though, continued to see the most activity. Companies in that province raised $939 million, a small increase from the $932 million raised the year before.

The majority of VC in Canada – almost $1.4 billion – went to information and communications technology companies.

The biggest of those exits was Shopify’s $1.6 billion IPO.