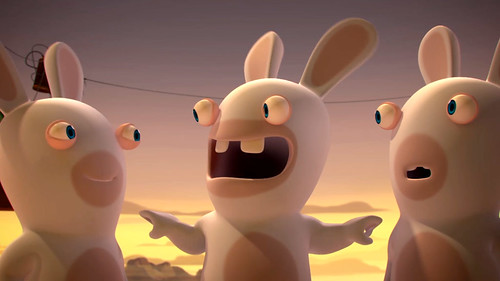 Hey, remember that kooky character, with the sweet hair, that floated amung the trees in those games where the only question people wanted answered was “why doesn’t this guy have any limbs?”

Well, forget about that guy.

Instead, let’s focus on the comic relief of that universe: the Rabbids.

Bit part players until 2006, when they got their own spin-off title, the Rabbids are even sillier than the protagonist from their origin franchise. They’re… rabbits? Rabid ones? But they’re aliens? Okay.

Rabbids are the original Minions (from Dispicable Me). Insanity, mixed with misunderstanding, stired by a stick that was dipped in dumb. They’re kind of a mess. A good mess.

The success of the stand-alone Rabbid games is a steady one, as the kids just love these goofy little guys (I’m sure there are adults out there too which are large fans). My favourite title staring Rabbids came early in the Wii lifecycle as it felt a little like Mario Party, but if Mario Party had been hanging out with their weird uncle for too long. With over a dozen games to their name, they’re enough of a house-hold name that Canadian studio Ubisoft will put further faith in their selling power.

In recent years, families have increasingly patronized entertainment centers and the attractiveness is still growing throughout North America. “Montréal stood out as the ideal city for testing the concept and launching a new type of amusement center. It goes without saying that we’re thrilled to develop this major project, right here at home, in Québec,” explains Olivier Ernst, Managing Director, Ubisoft Canada. “The Rabbids are a perfect match with our vision for this project,” adds Ernst. “Being a brand with universal appeal, it allows for the development of a physical, accessible and truly fun experience for the entire family. These crazy and lovable creatures are a world phenomenon with more than 14 million games sold and an international TV series.”

Well then. Who can argue that. And when you stop to consider the possible public backlash of opening up an Assassin’s Creed Family Fun-Time Park— with real assassin-ing— it’s easy to see why Rabbids is the perfect franchise to run with this idea.

“Ubisoft is an entertainment company with strong expertise in building emotions, creating worlds, characters and stories that have proven to reach audiences beyond video games,” says Deborah Papiernik, Vice-President New Business for Ubisoft.

But that’s really all the information that Ubisoft is willing to give us right now. I can’t say I’m not intruiged. It would be a fabulous future if amusement attractions based off video game franchises were successful. Here are my top three wild guesses for Rabbid Park attractions:

Jesting aside, I’m interested to see where this development goes, and whether or not Ubisoft will be willing to venture ourside of Quebec with similar projects should this initial one succeed.

There will most likely be more on this story as production/construction begins. But for now, why don’t you suggest amusement attractions in the comments below!