The idea behind video marketing pioneer Vidyard stems from a University of Waterloo fourth-year design project by co-founders Michael Litt and Devon Galloway.

The two started a video production company and quickly saw how their customers were interested in audience analytics. After graduating from engineering in 2011, Litt and Galloway incubated their idea for a video data tool for businesses at Silicon Valley’s Y Combinator before returning to Kitchener with seed funding in hand.

The platform helps companies like Microsoft, Honeywell, LinkedIn and Citibank manage video content and offers deep analytics: where it’s being watched, for how long, and on what device. This means businesses can better understand how audiences are engaging with their content, helping them generate sales leads and better target buyers.

Today, Vidyard is headquartered from a heritage building on Queen Street in downtown Kitchener.

Vidyard’s 40,000-square-foot office is the last brick-and-beam space in Kitchener’s core. In 1925, the building opened as Goudies Department Store, a retail pillar in the Kitchener community that closed in the late 80s. Despite major renovations—including a third-floor glass atrium—the three-storey space comes with historical charm: soaring ceilings, original brick walls, hardwood floors, and exposed structural beams. The addition of large windows, skylights, a rooftop patio, and an unconventional foam pit brought the heritage space into the 21st century. 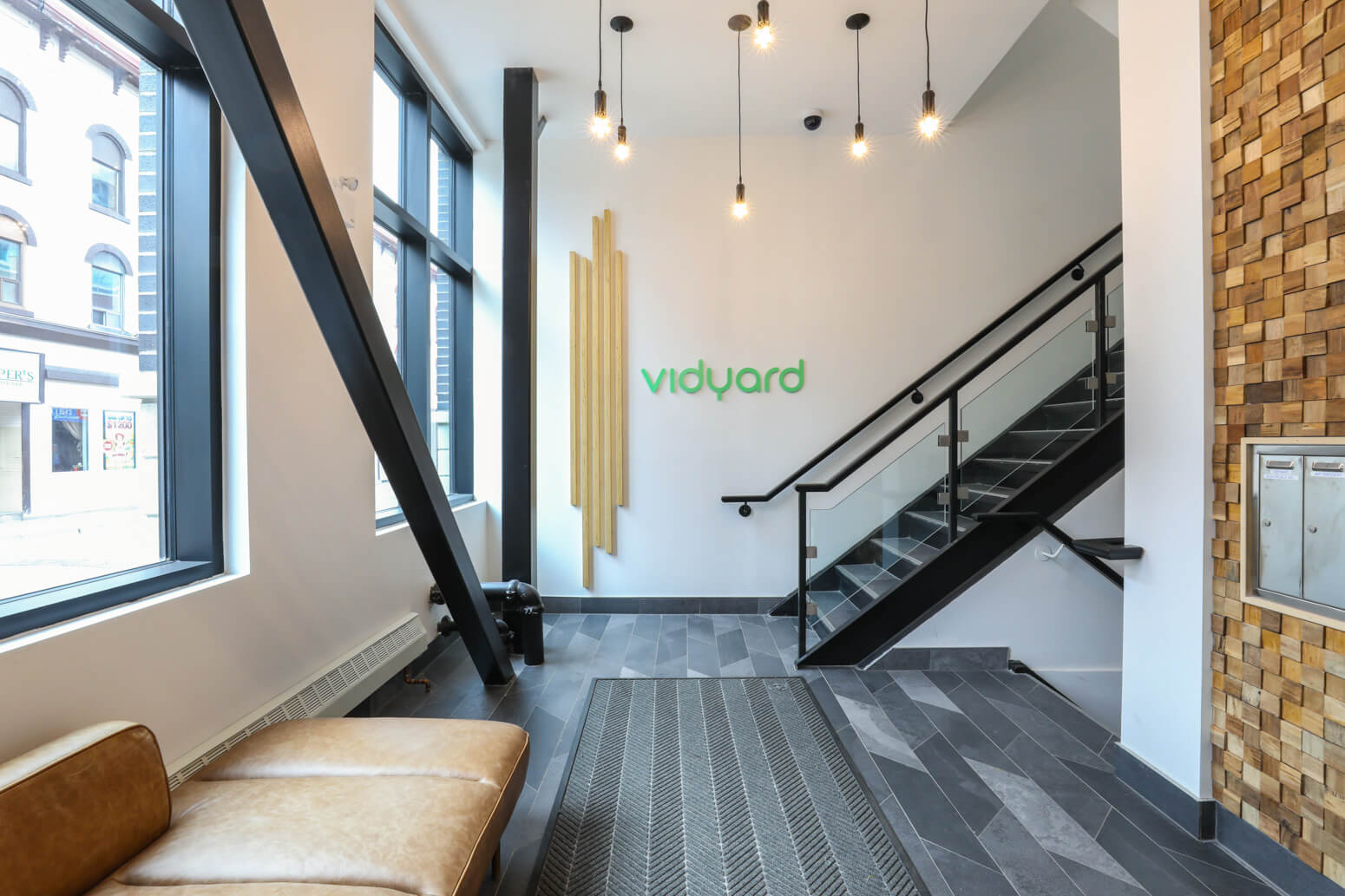 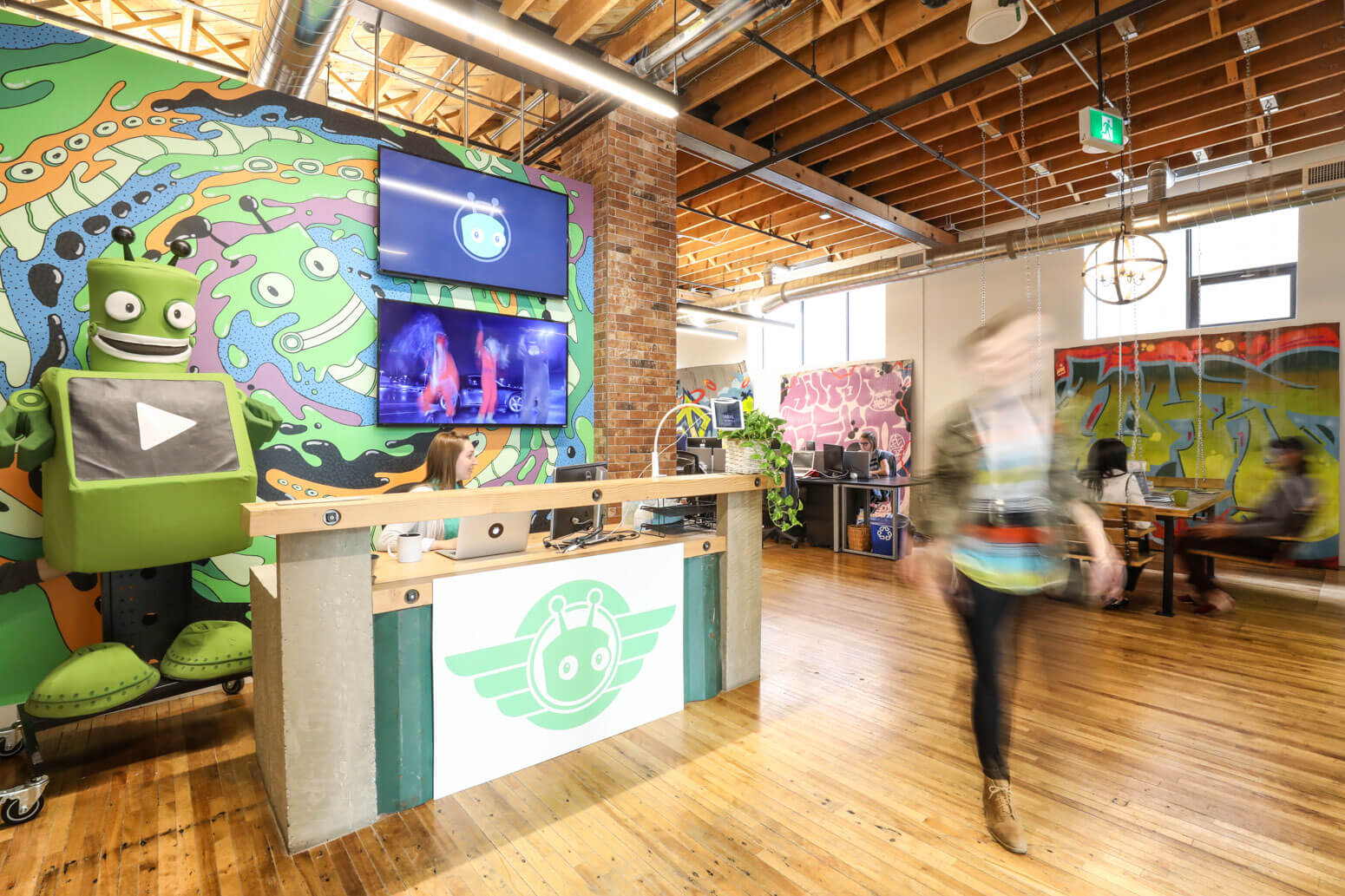 On each floor, the meeting rooms follow a theme: first floor rooms are named after colors, second-floor spaces pay tribute to old video mediums, and the third floor bears the names of newspaper publications. 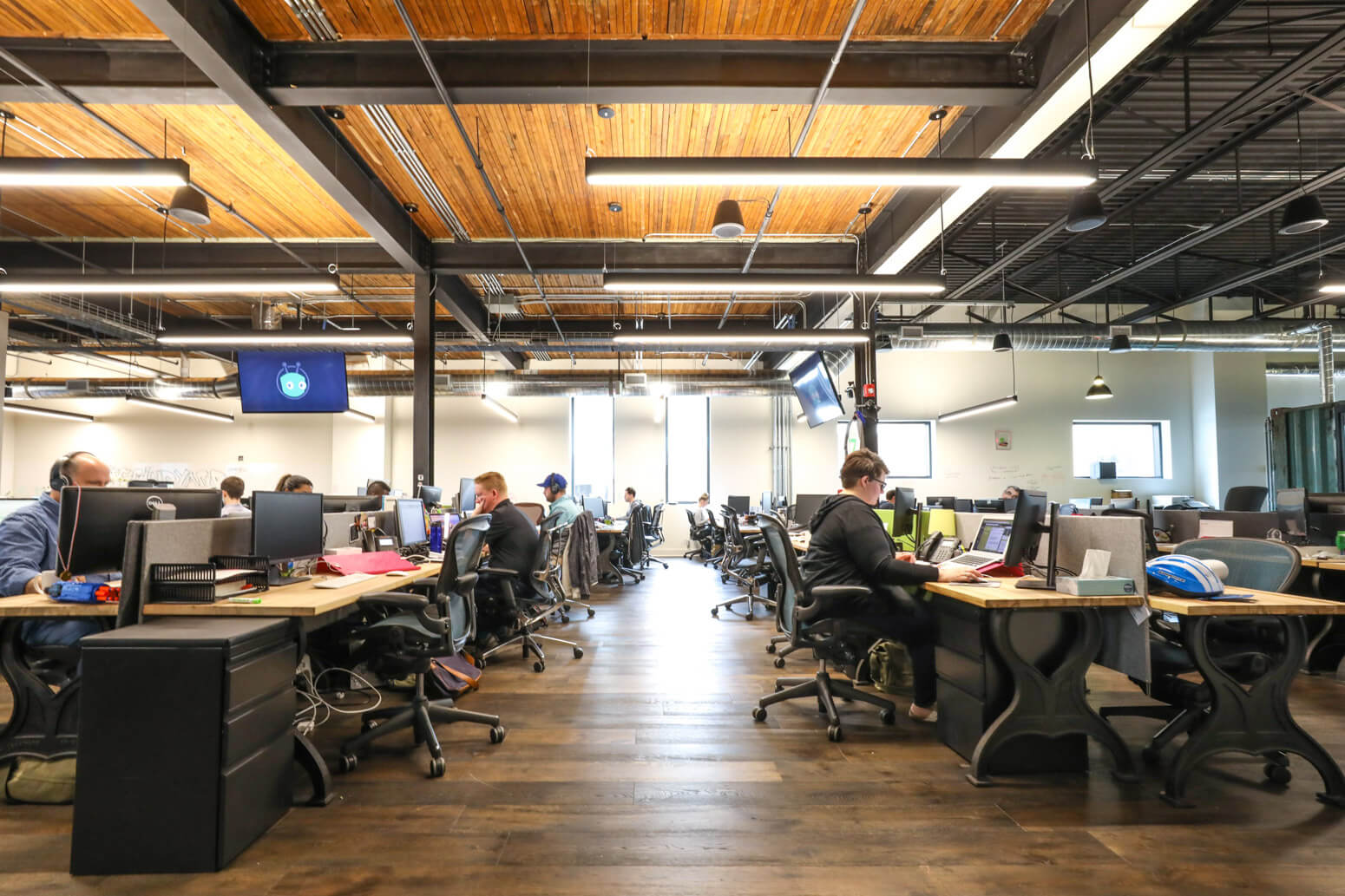 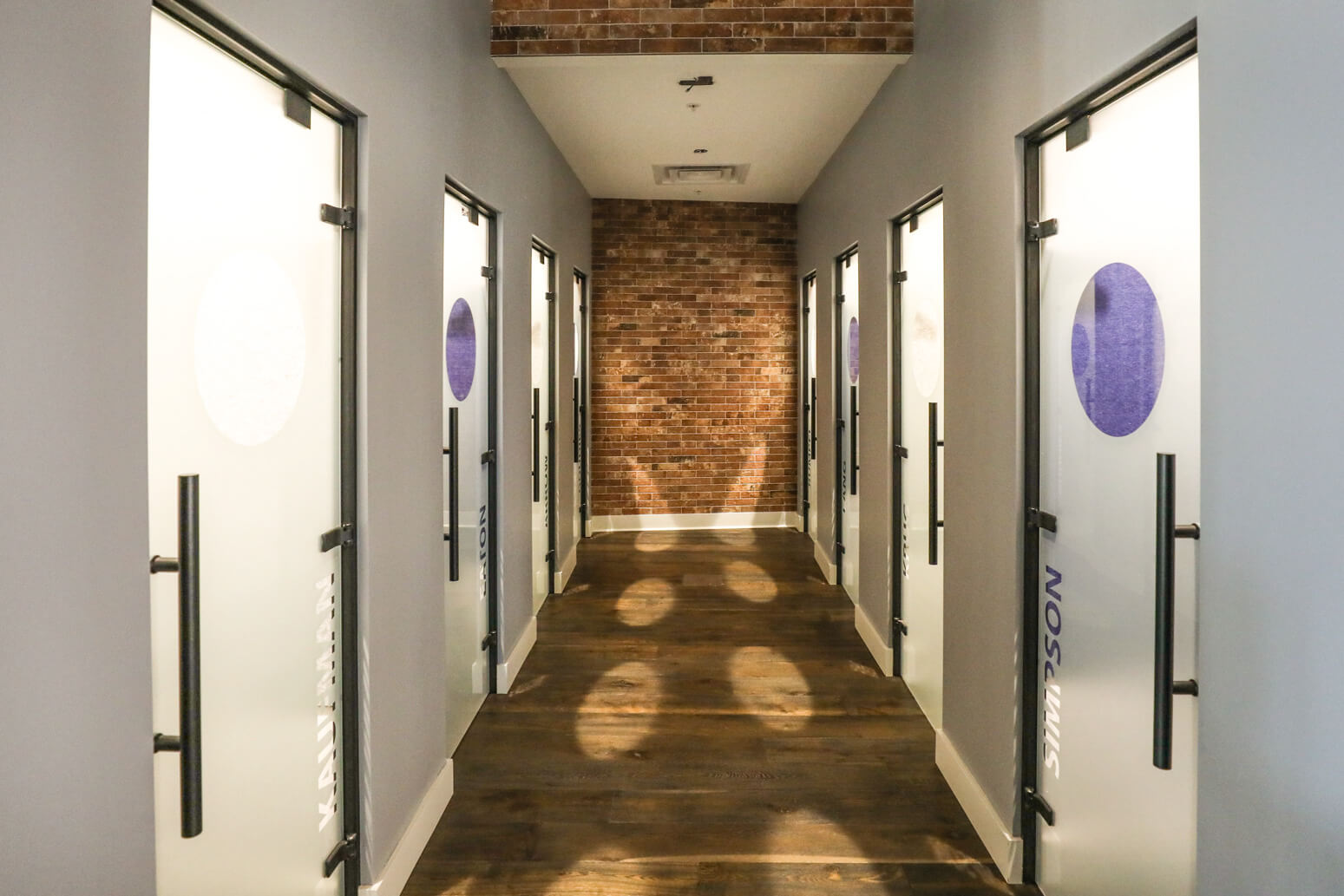 A handful of office walls are painted with brightly colored murals by local artists while others are adorned with bold graphics, a few even featuring Vidyard’s mascot V-bot. Several walls double as whiteboards used to brainstorm ideas, write messages of encouragement and broadcast sales results. Every time a big deal in closed, the team rings the Big Bell; three former church-bells that chime throughout the office. 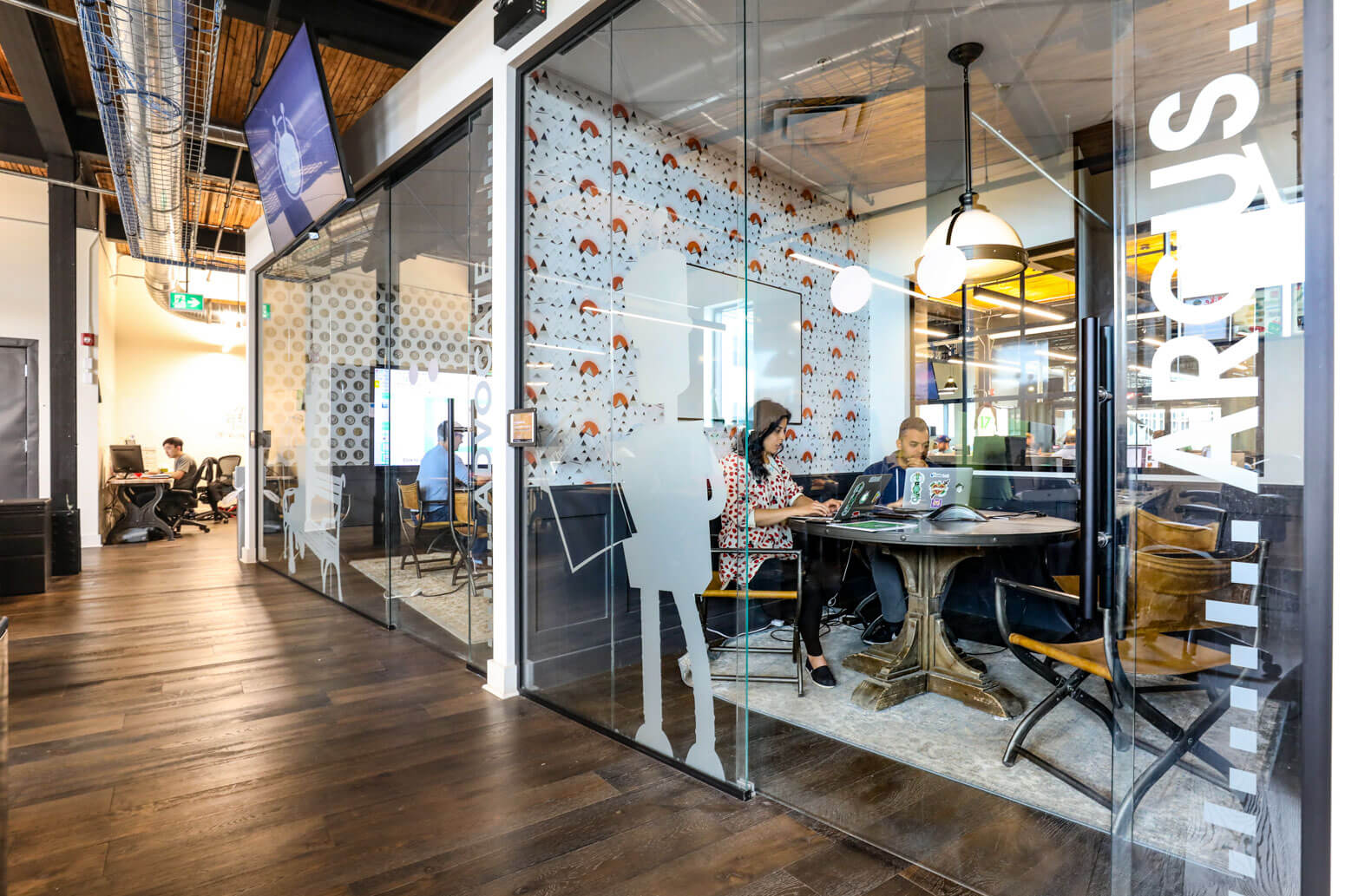 For a company that specializes in video, the office wouldn’t be complete without a state-of-the-art media studio. The soundproof room is equipped with an editing suite and features a one-way mirror—a dream for any video content creator. 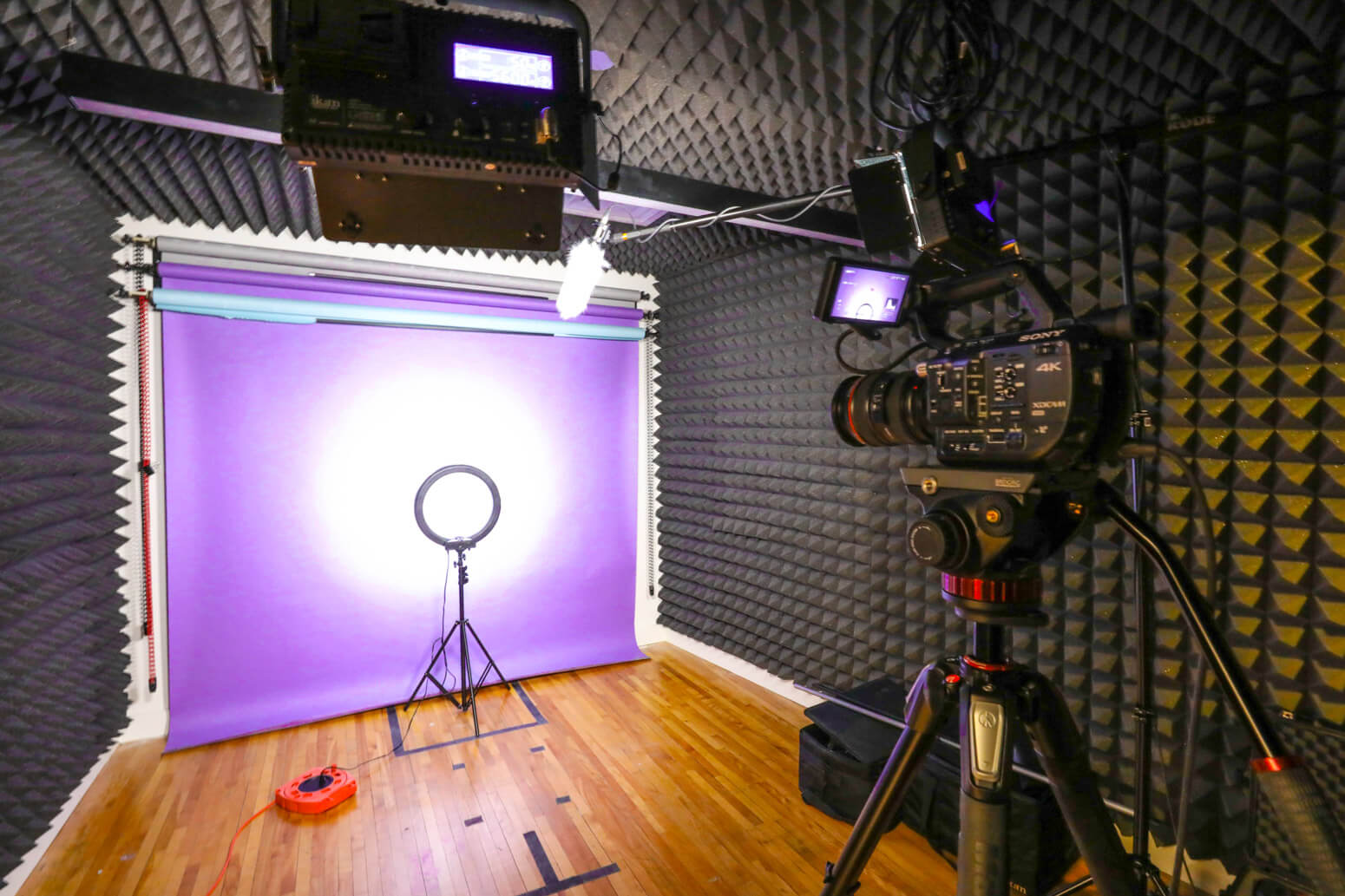 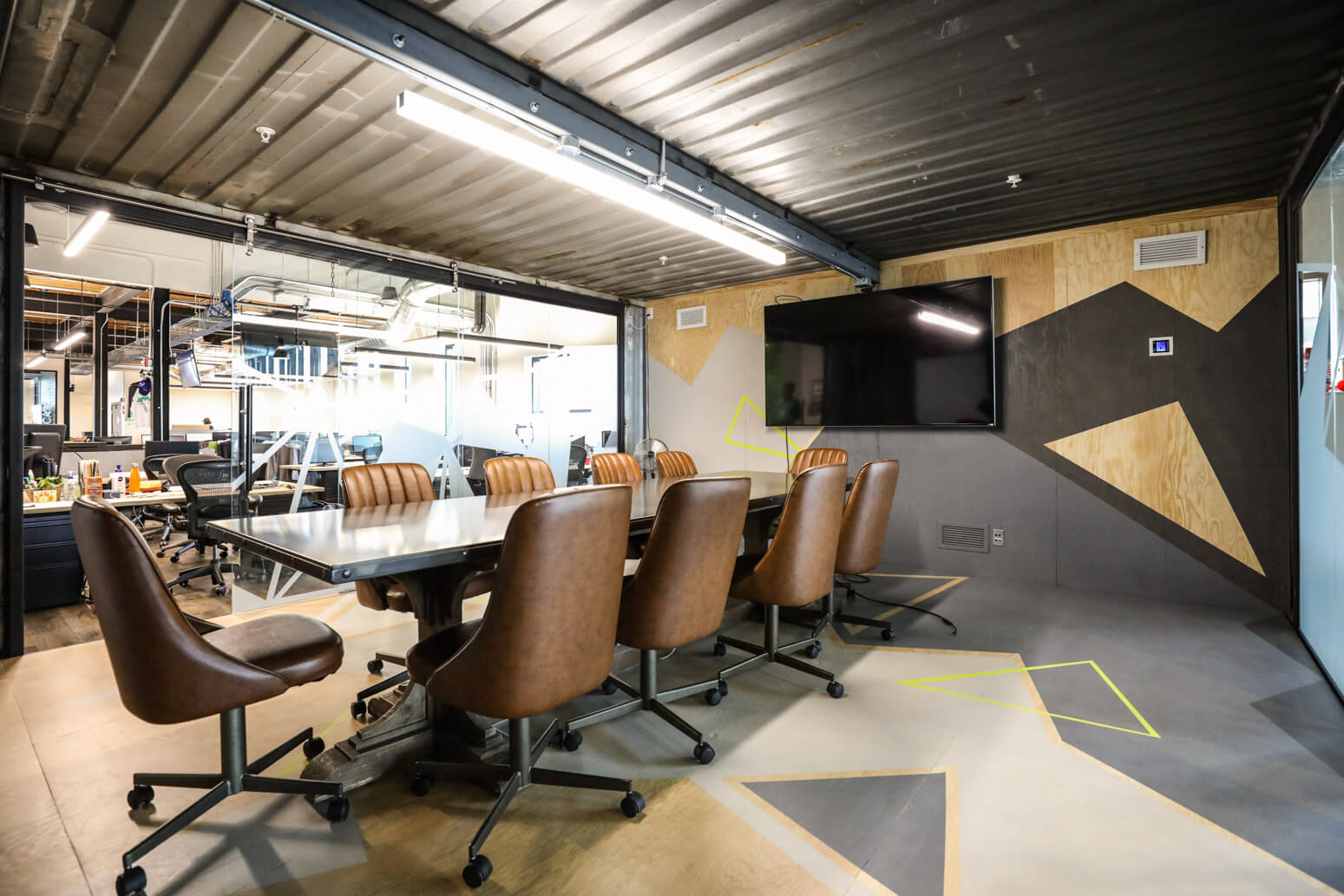 Vidyard’s mix of practical and non-traditional workspaces was designed specifically with the needs (and wants) of their employees in mind.

On the first floor, free-style swinging benches and tables, a couch corner, and open-concept workspaces are all areas of collaboration meant to encourage team dialogue. Dedicated to the marketing team, the floor offers both open and quiet spaces. Just off the main reception, each new employee can really make their mark by adding a handprint to the elevator wall—there’s more than 100 and counting. 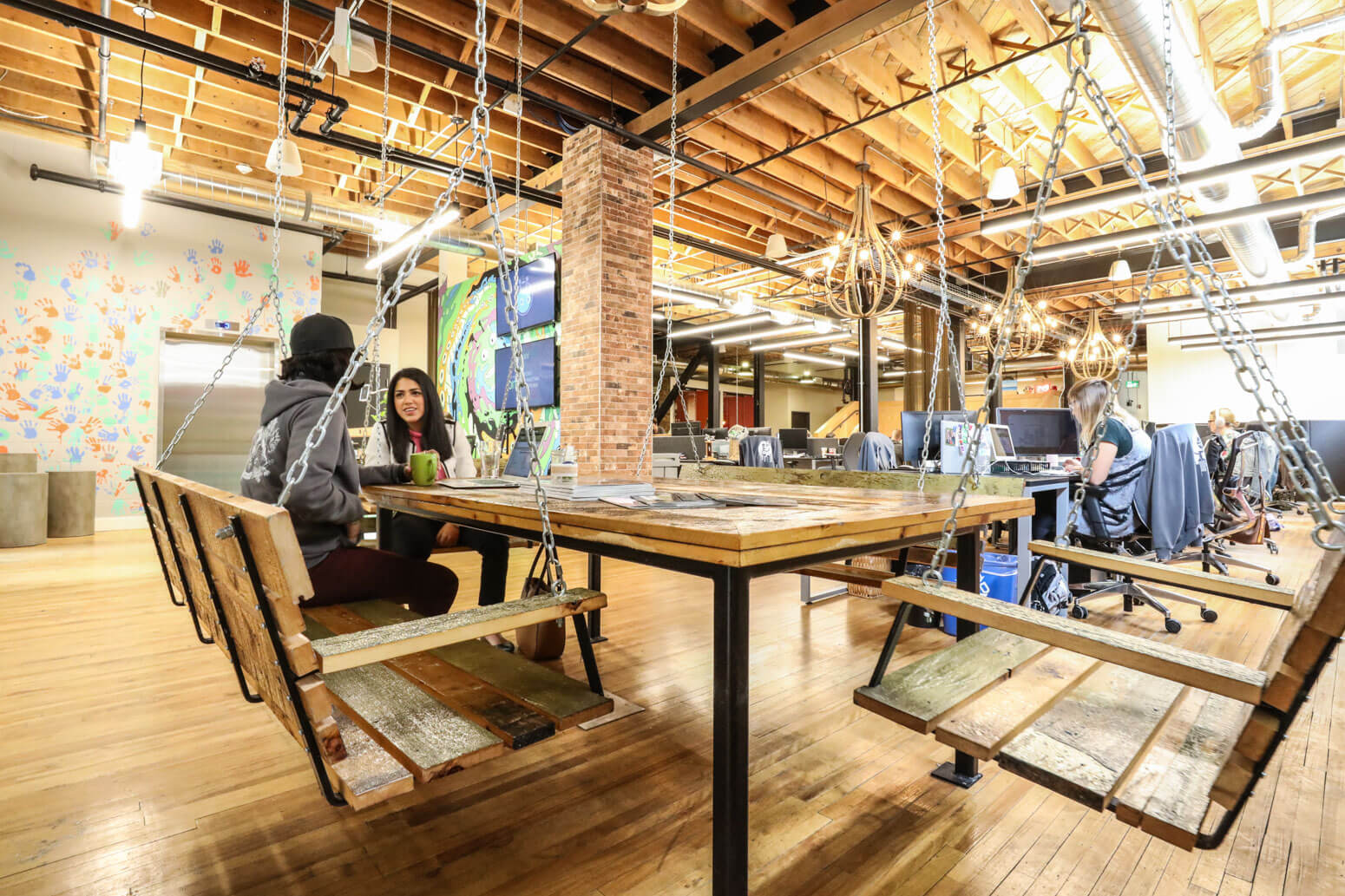 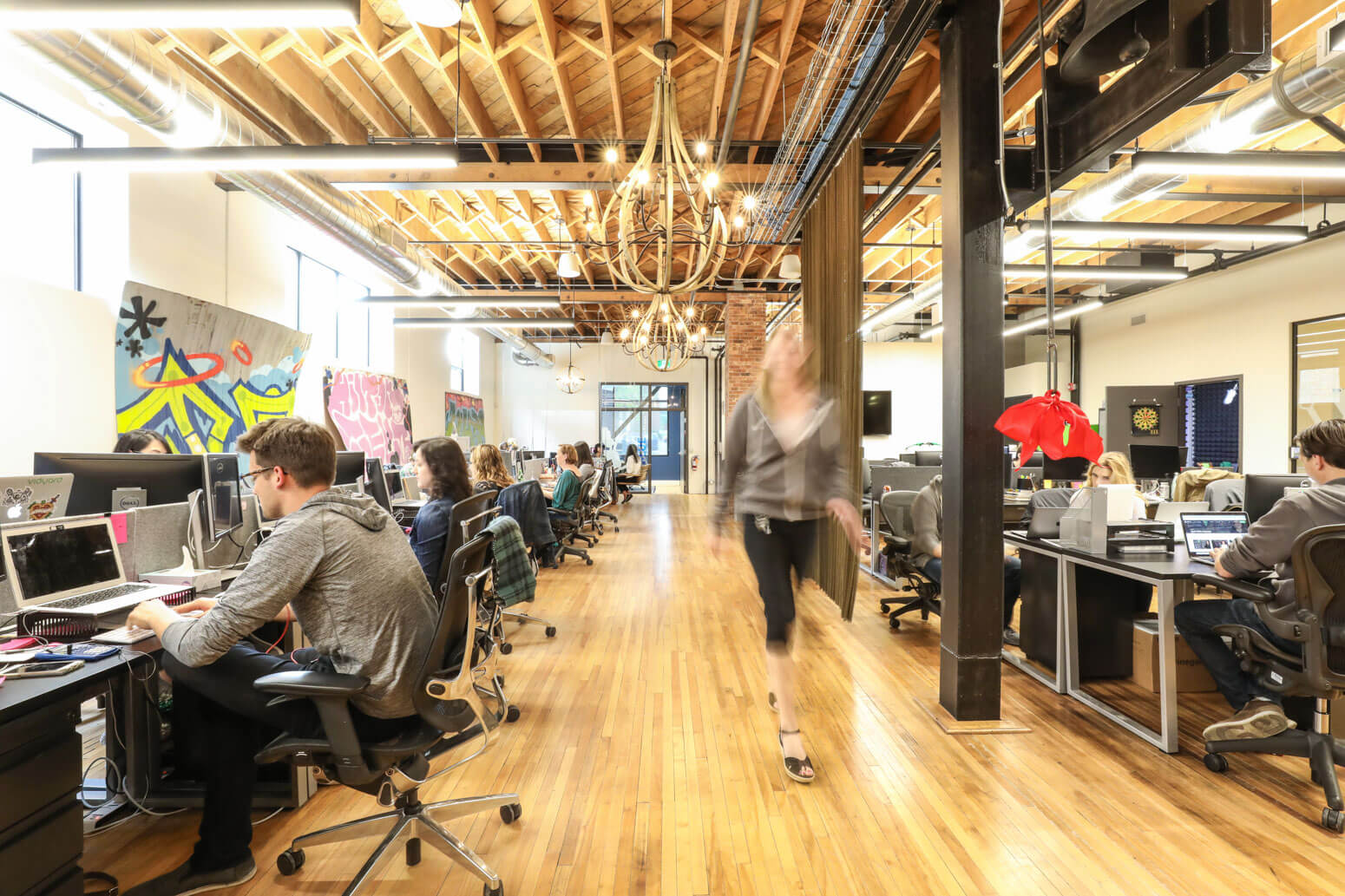 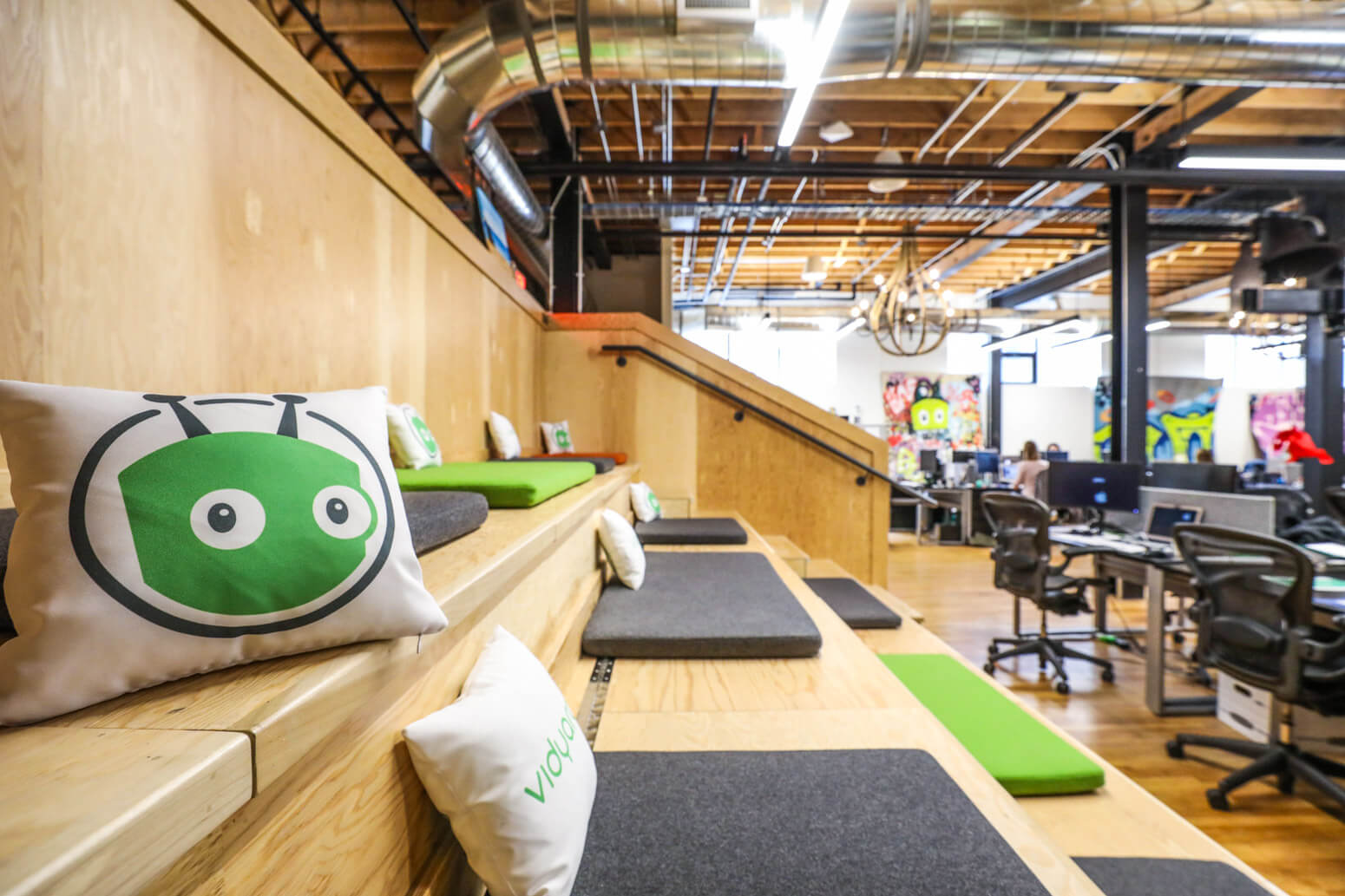 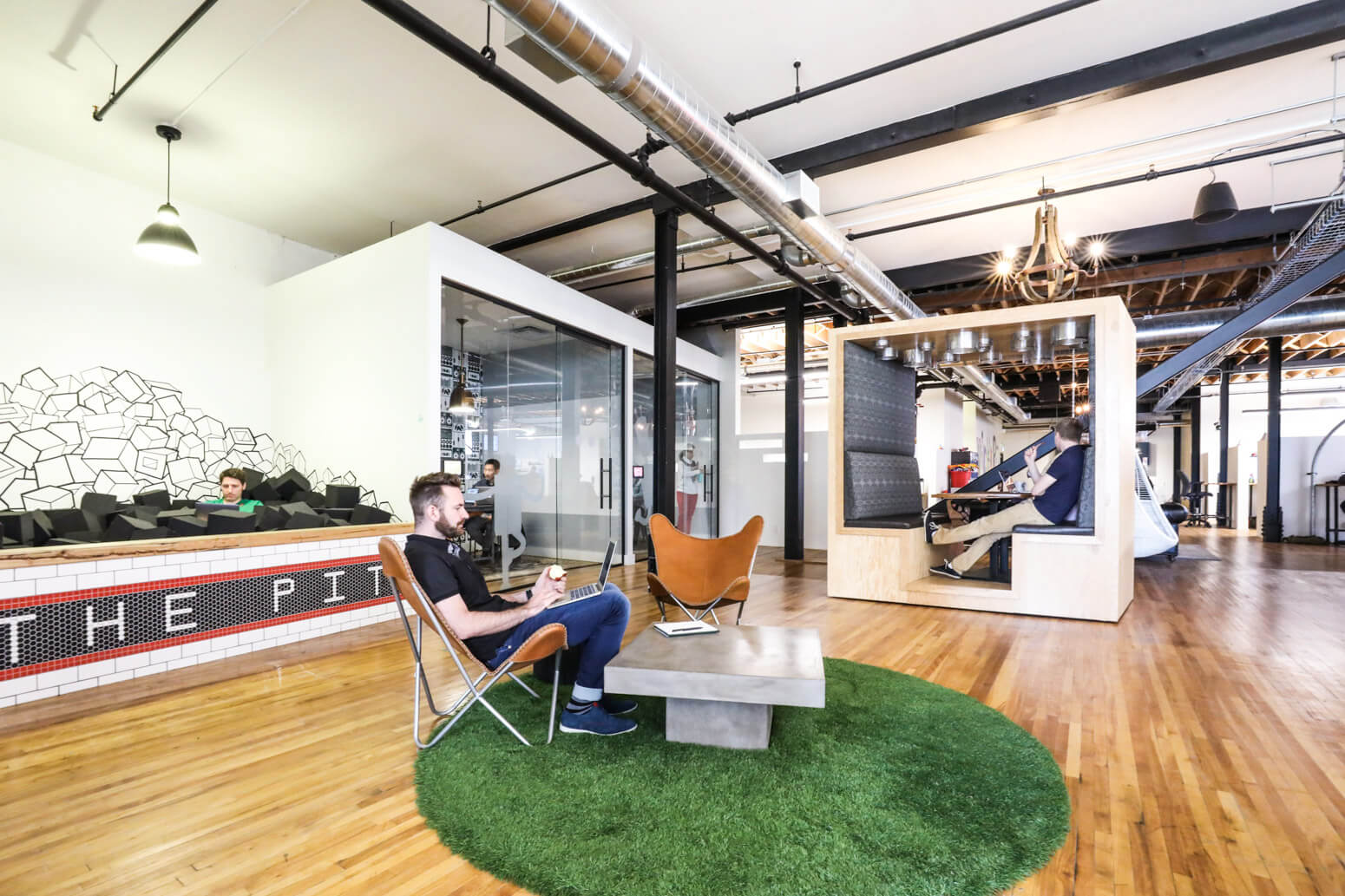 The middle floor is also home to “The Library.” Equally swanky and vintage, the open room hosts both external events and internal gatherings from board meetings to in-house training. But this isn’t your average library. It features a wet bar, custom fireplace, antique freight elevator and board room with a concrete map. A library also wouldn’t be complete without books; employees can add a book to the collection and check back later to see who else at the company has lent it out. 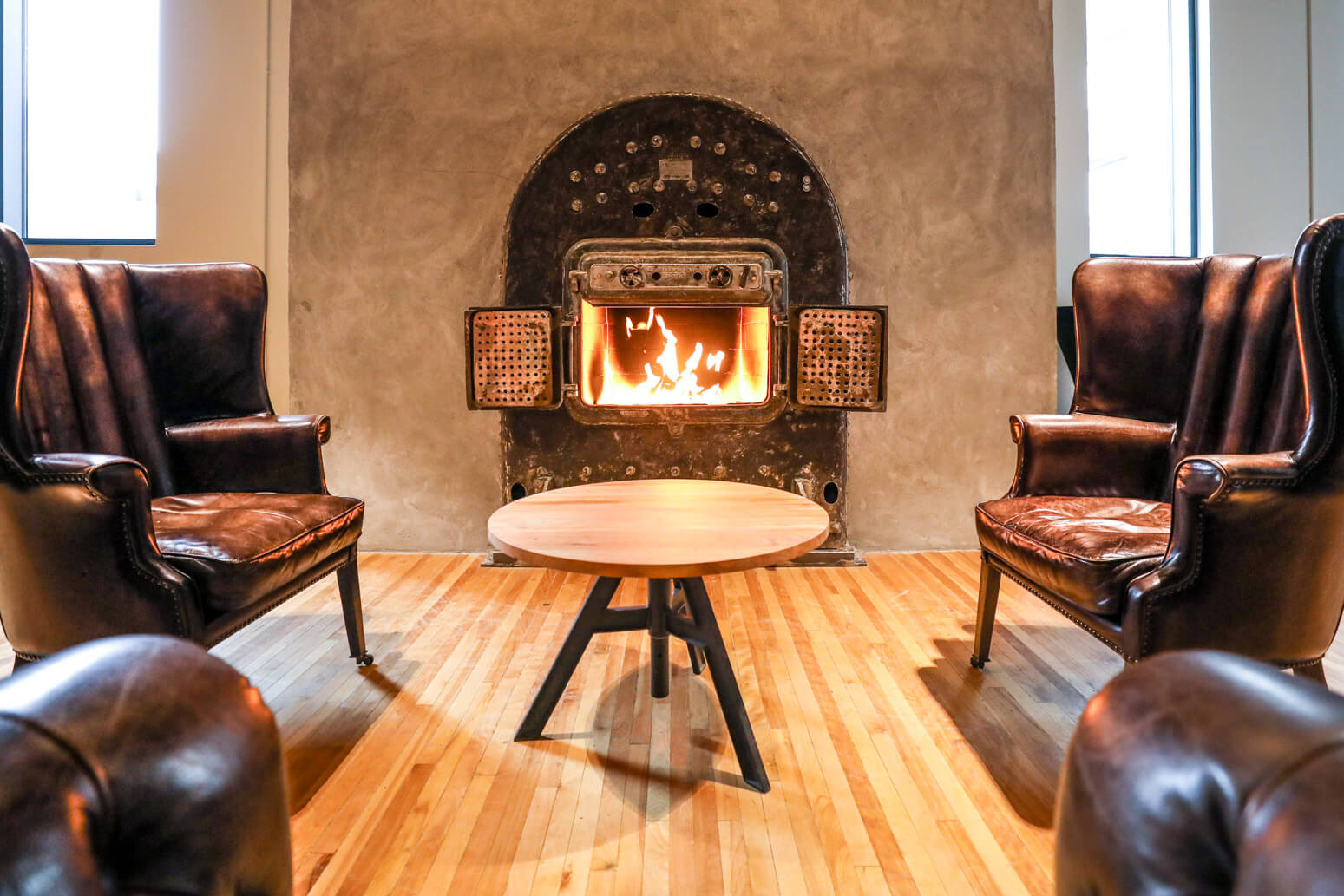 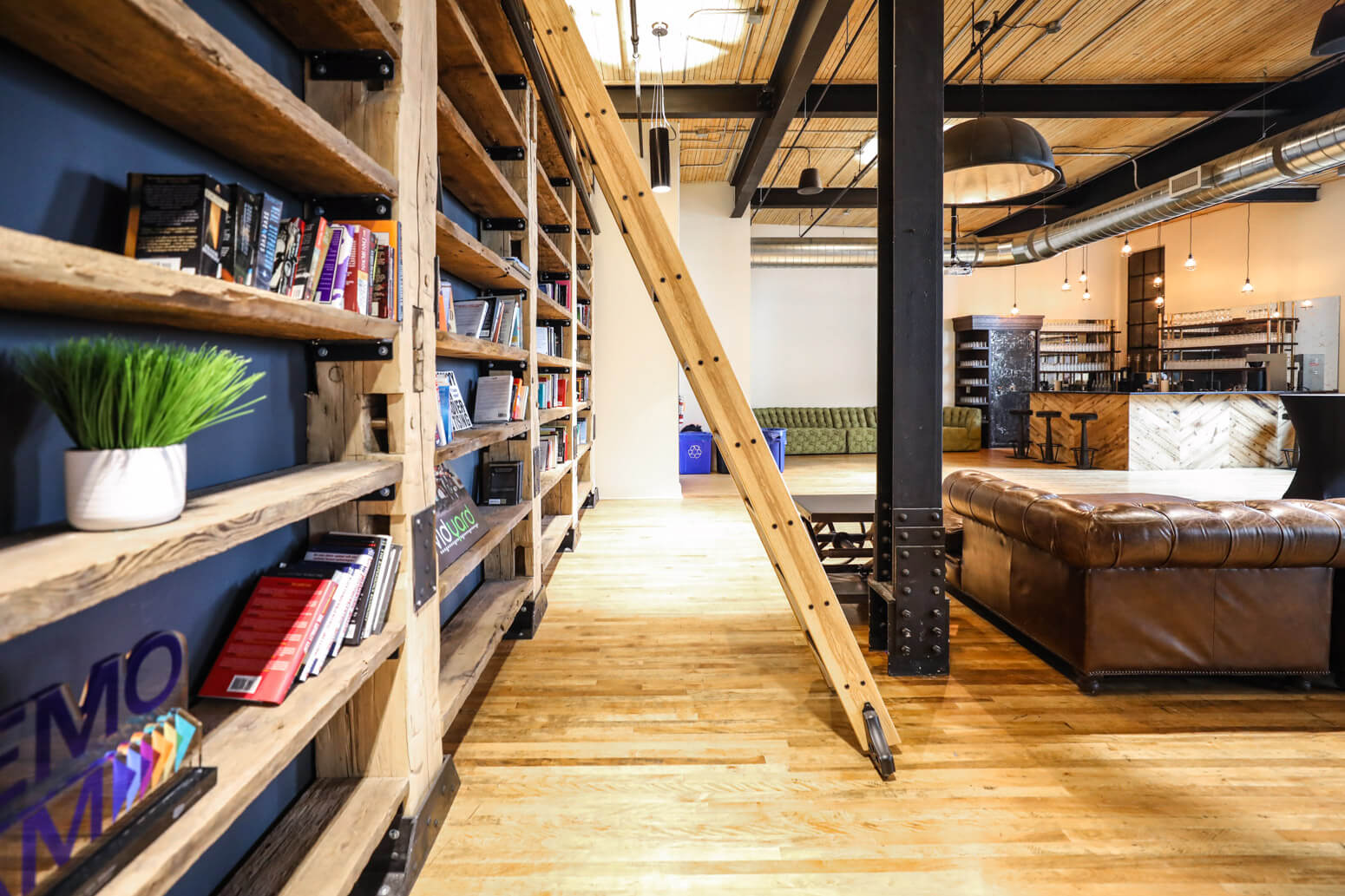 The third and final floor houses all of the direct to customer functions, from inbound lead development all the way to customer support. This floor is the most open of the building but still features more private spaces to take calls. In the center of the space, a vintage shipping container was converted into a board room—an eye-catching feature in the smartly designed space.

Vidyard also has their own Room of Requirement; the Harry Potter inspired named room with four mirrored walls intended for religious observances, private meetings and even a quiet place for a massage. 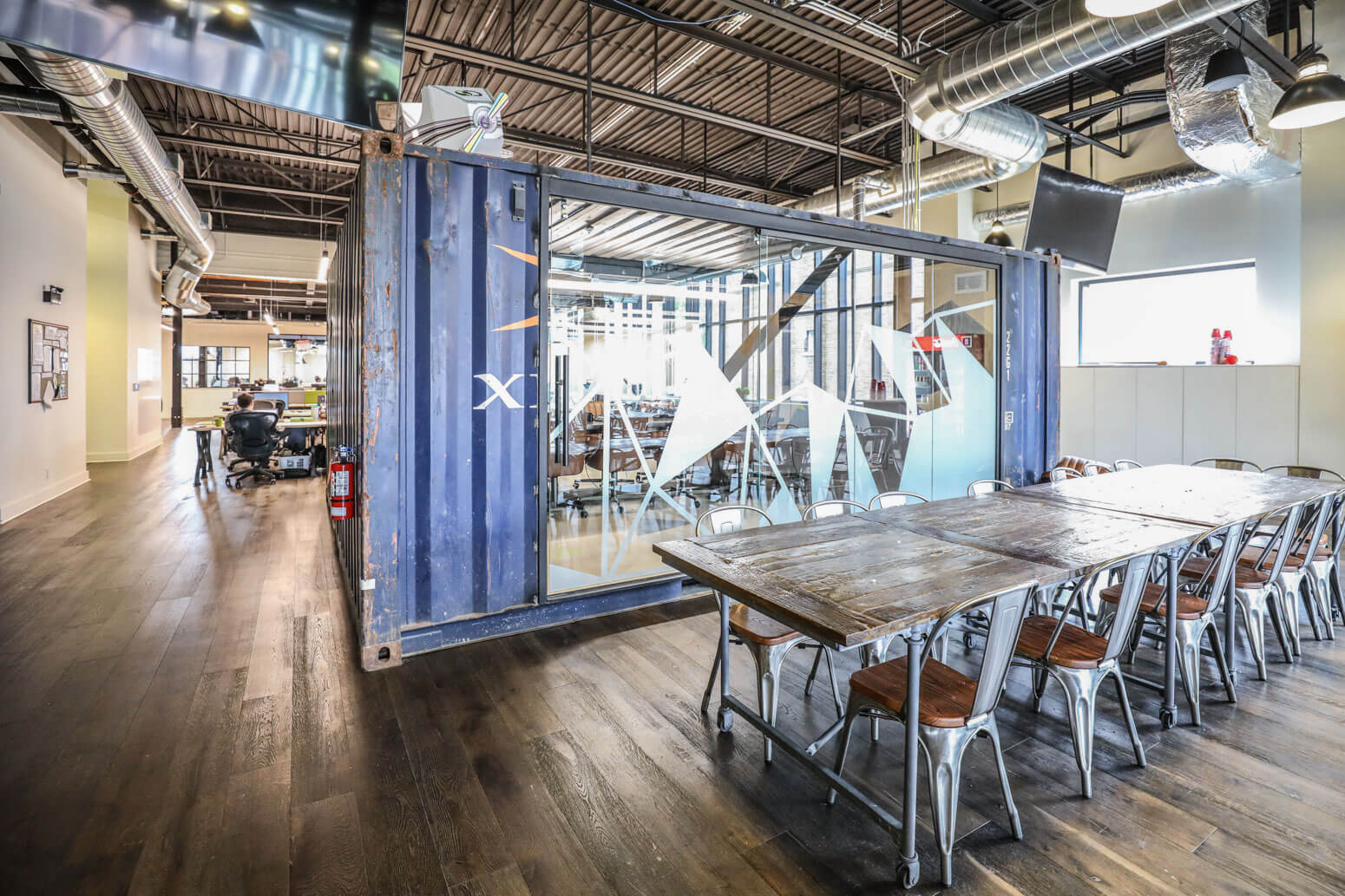 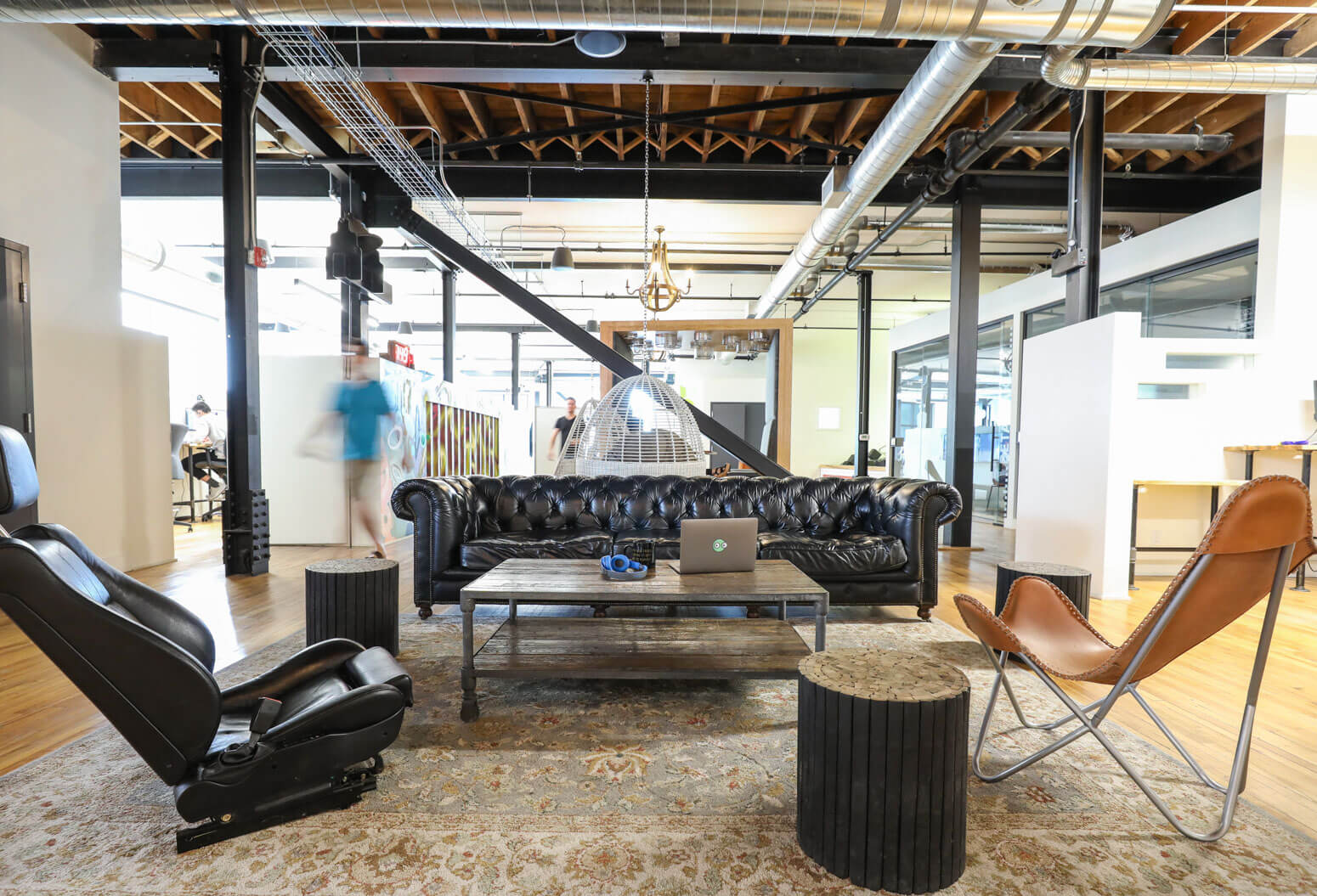 Vidyard employees can take advantage of the daily catered lunch in the truly epic gathering space. Lunch is an honored time at Vidyard where the team catches up and connects over a shared meal. 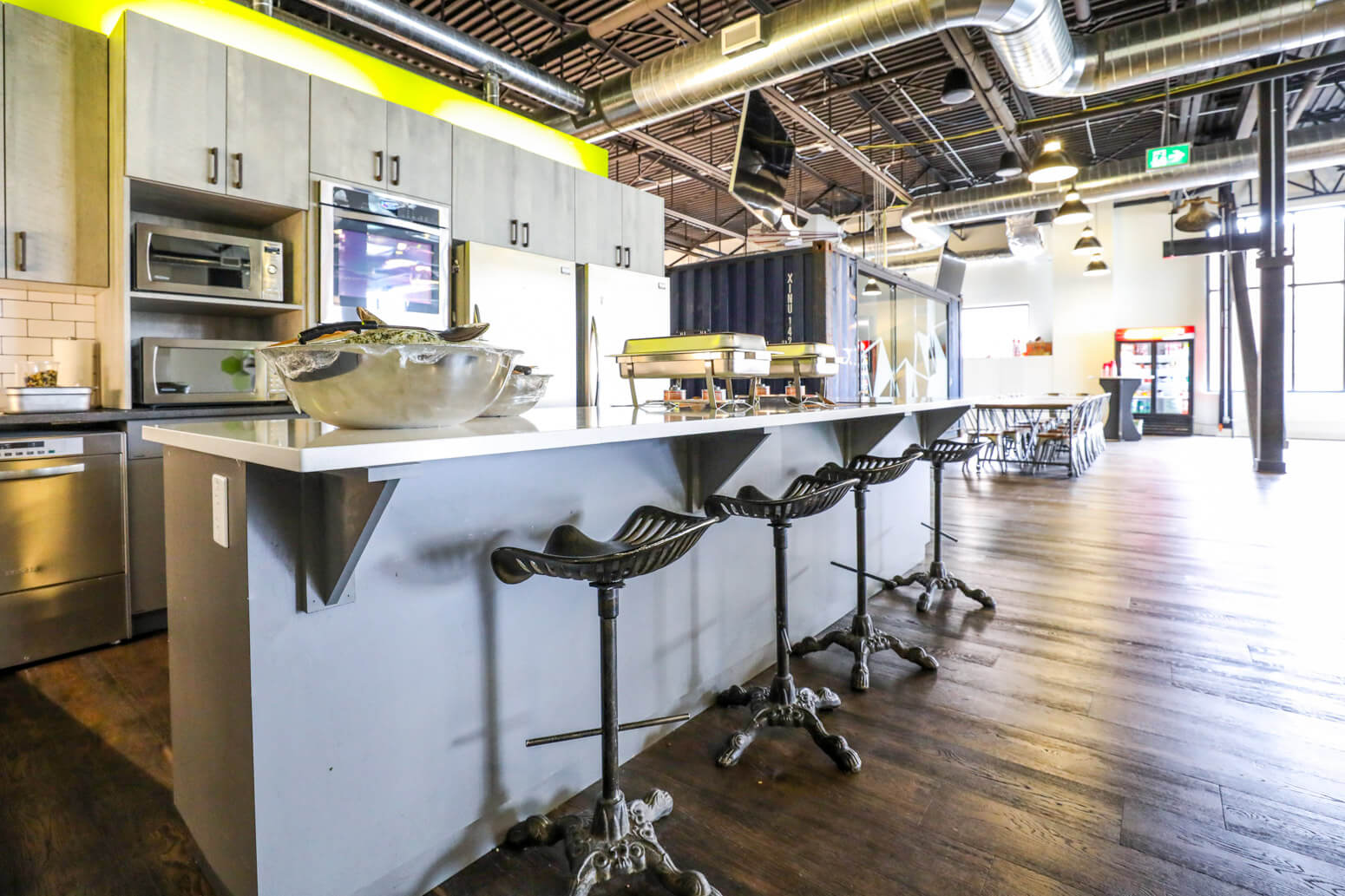 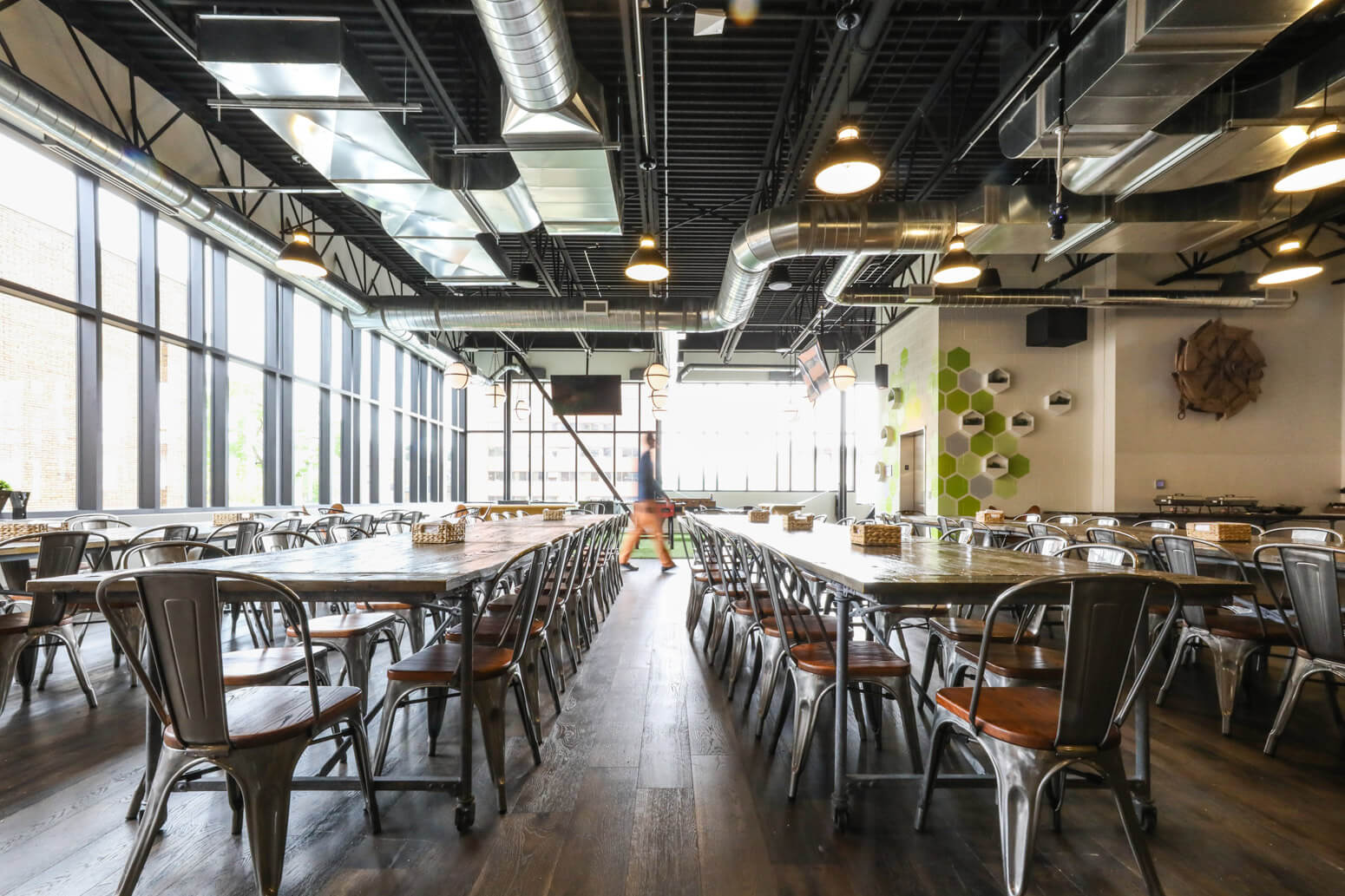 To fuel employees during the day, a range of complimentary snacks and drinks are also on hand: granola bars, fresh fruit, popcorn, trail mix, and even ice cream bars. Mini Starbots Cafés are on every floor for when a caffeine craving strikes. 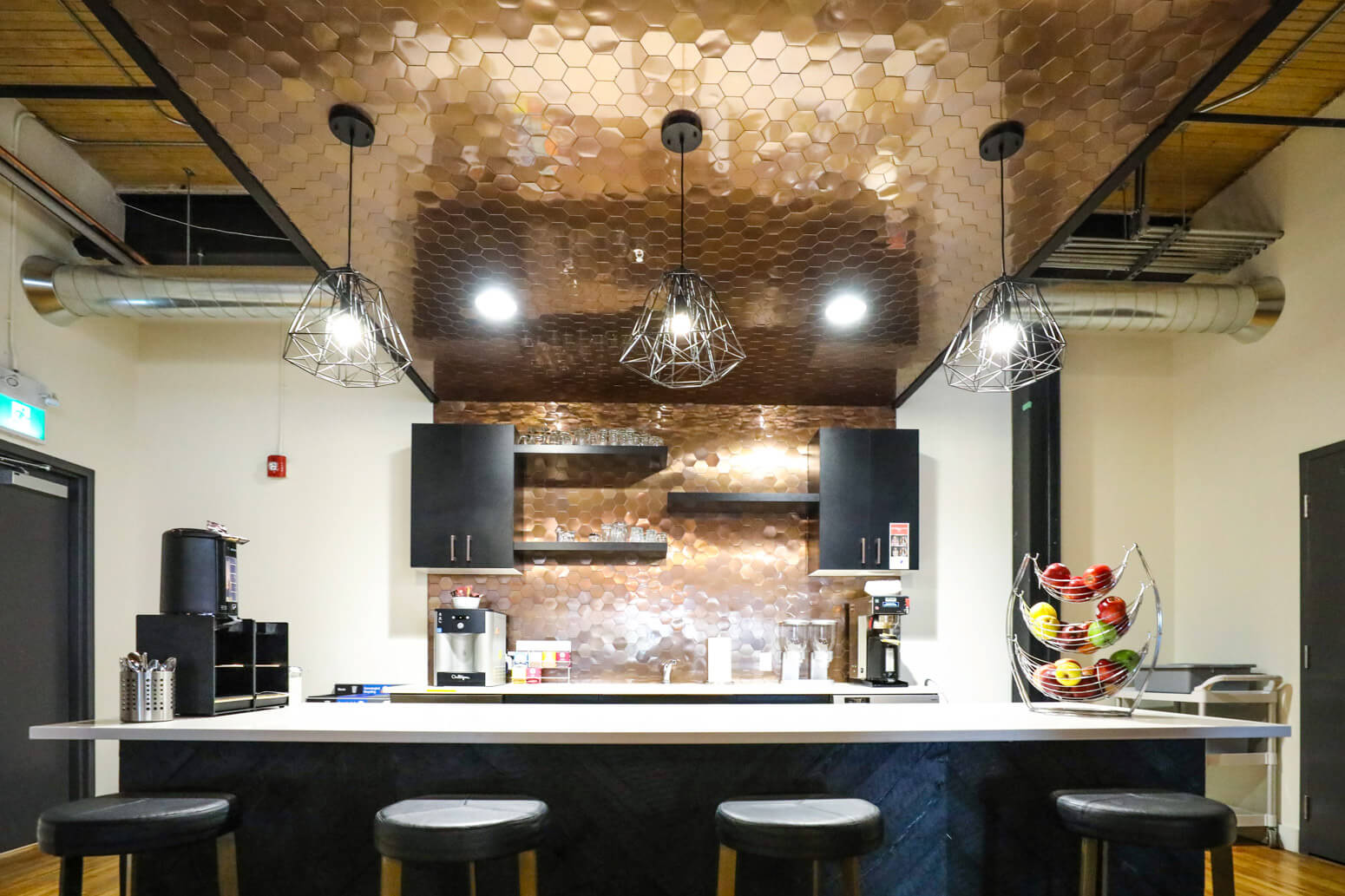 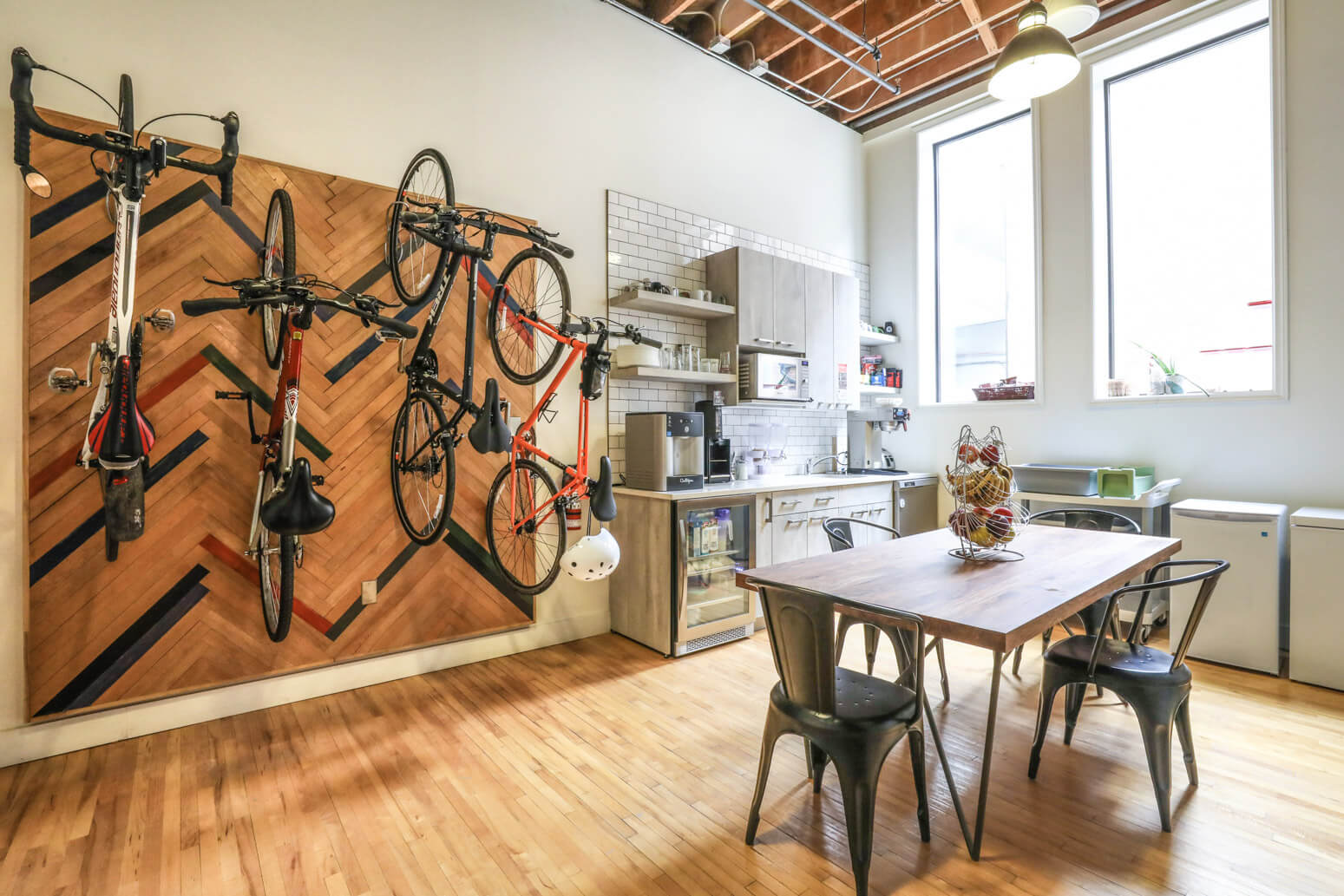 The co-founders wanted each “Vidyardian” to truly understand what it means to be a part of their team, so much so they created a signed agreement for all employees to ensure a commitment to preserving the company’s culture.

Vidyard has a host of in-house training programs to help employees learn skills they can apply both inside and outside the office, including its Sales Academy, financial planning, and quarterly stock options training. Through leadership development, managers learn how to have effective one-on-one conversations with their team members. They’re taught to give performance feedback in real-time and focus on professional and personal goal attainment. 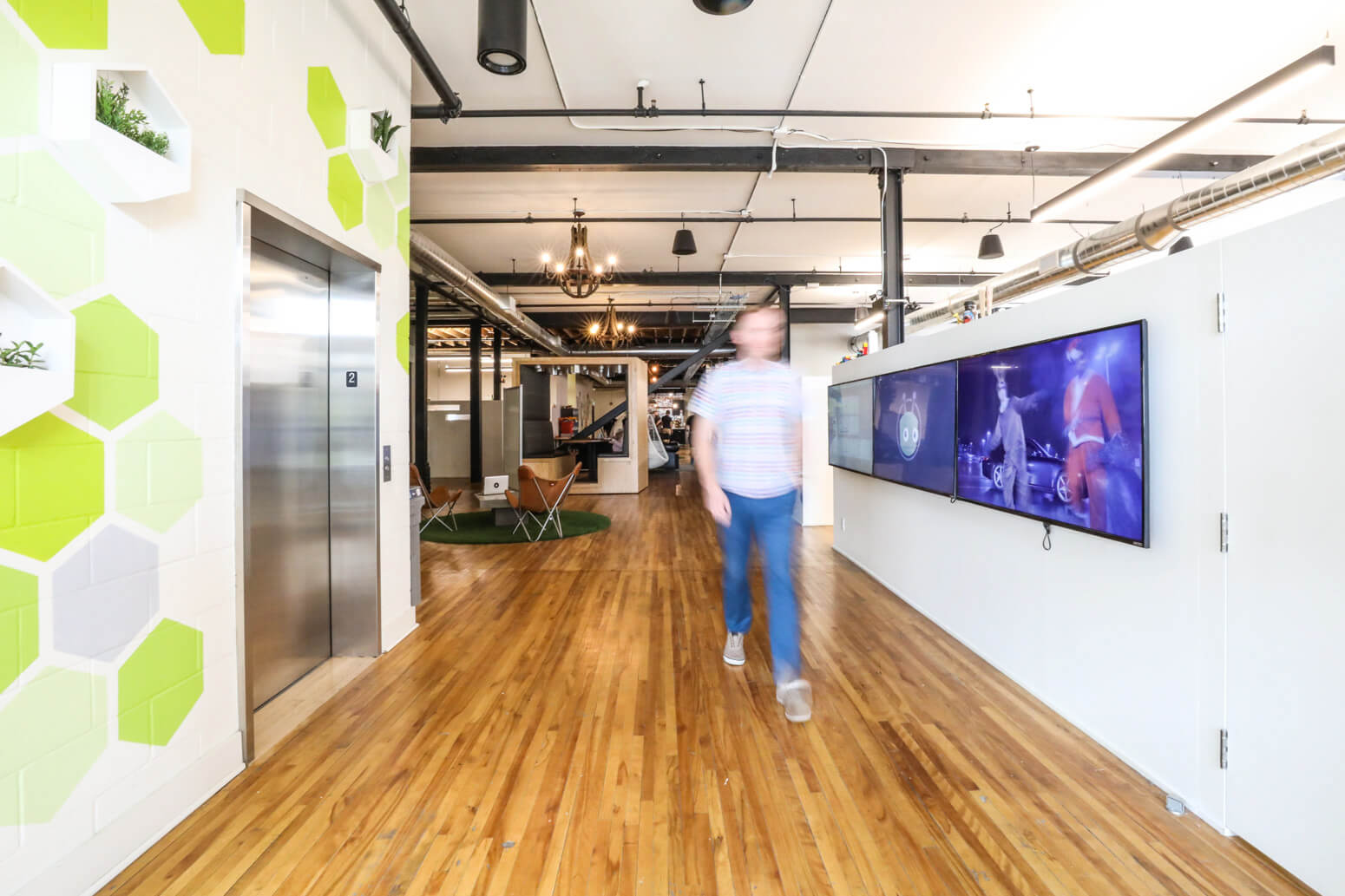 By the nature of their business, Vidyard’s creative environment encourages employees to produce videos around the office and get involved. Vidyard brings in co-op students and paid interns to jump on board each academic term and help with important projects. 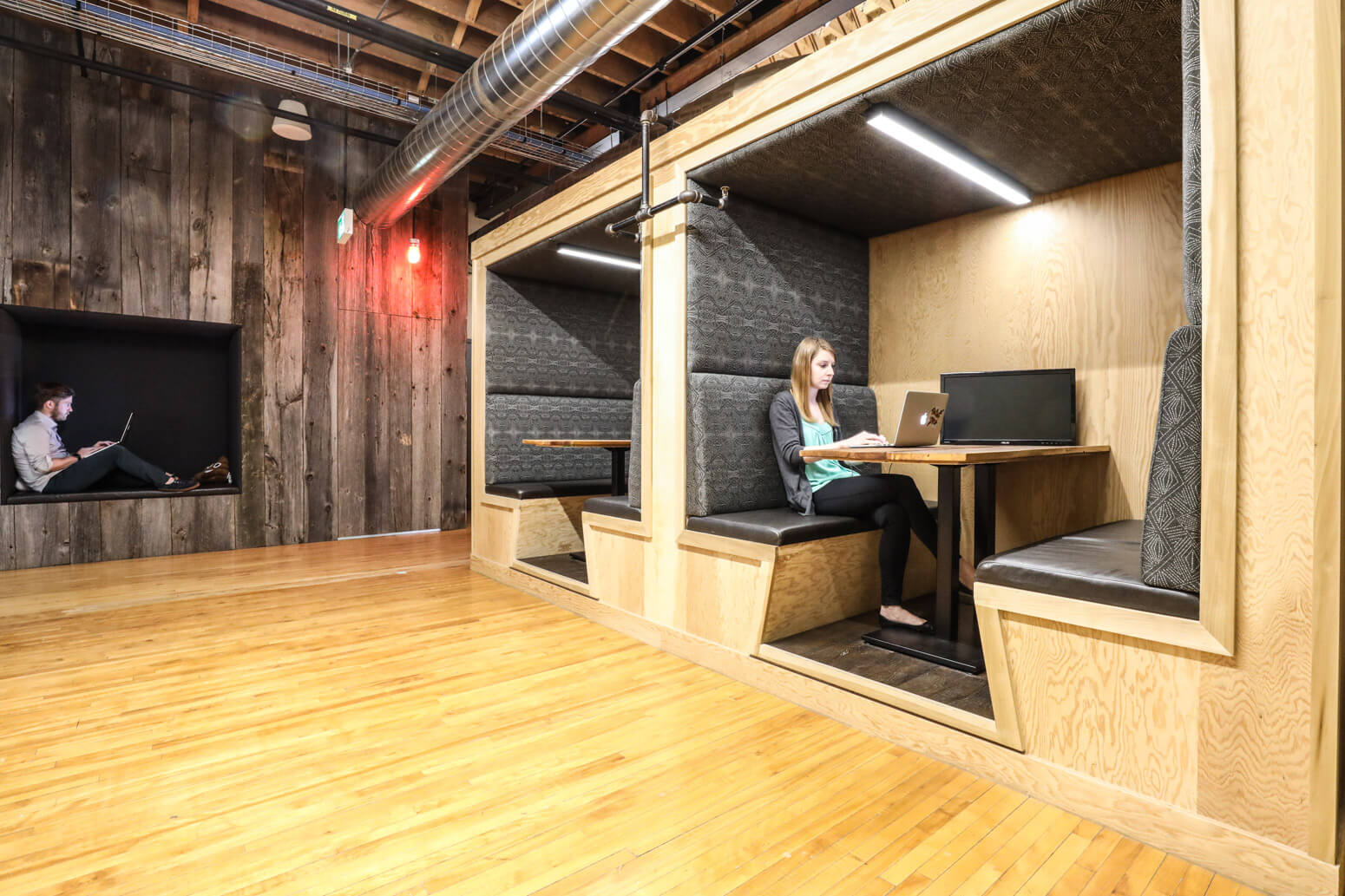 A core team at Vidyard conceived, developed and launched a program called Plugin, designed to bring the tech community and non-profit charitable institutions together. In the Kitchener-Waterloo region, Plugin organizes charitable, fun and memorable events. To date, five events have brought out hundreds of professionals and raised $15,000 in donations. 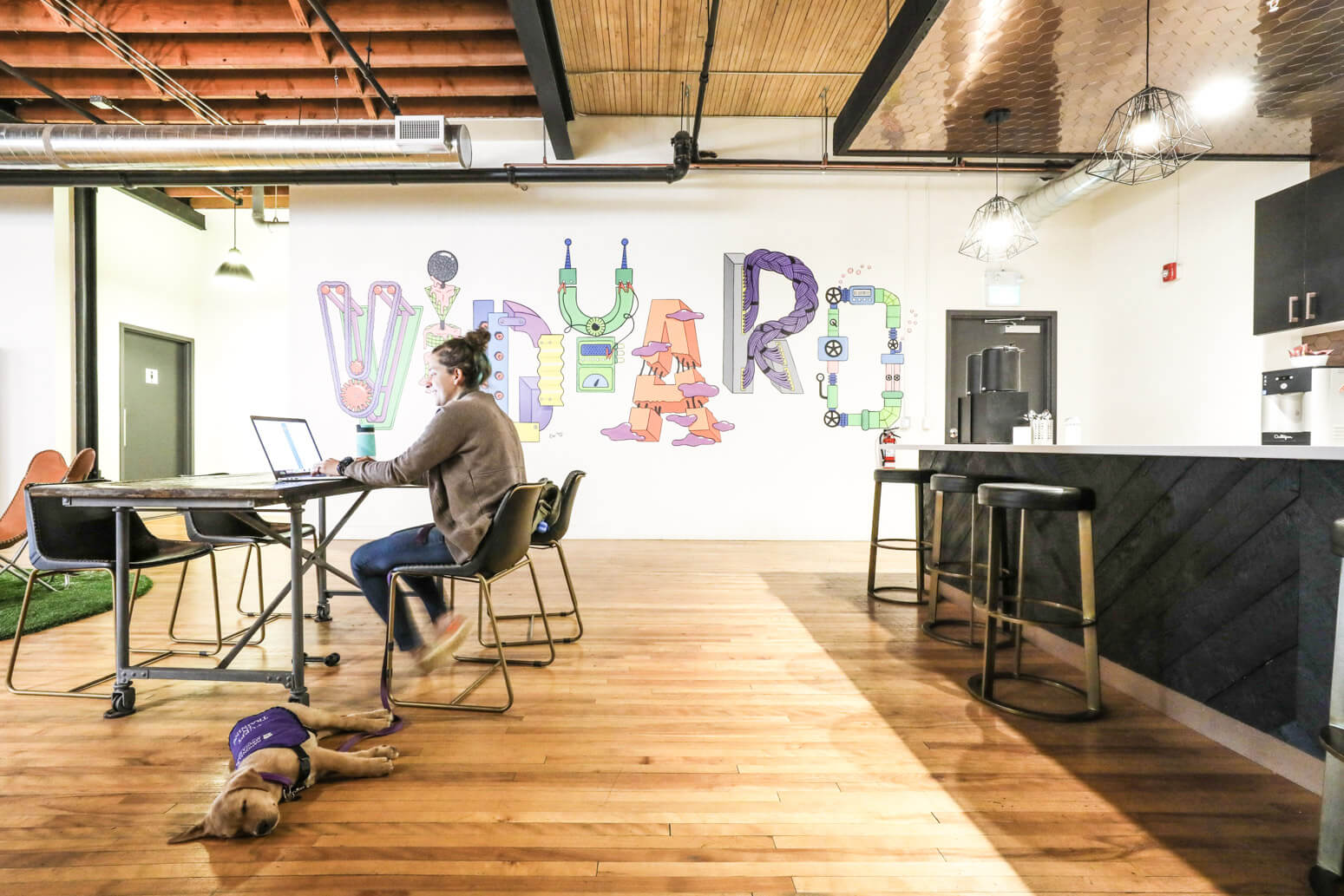 Surrounded by windows, “The Shire” is a bright, airy and grassy space at the far end of the third floor’s Town Hall. At lunch and after work, you’ll find employees pulling up to the picnic tables or duking it out at one of the four foosball tables.

There’s no shortage of video games at Vidyard. They host Super Smash Bros. tournaments although League of Legends is the lunchtime game of choice. You can also take a step into an alternate world with Oculus Rift at the virtual reality station. 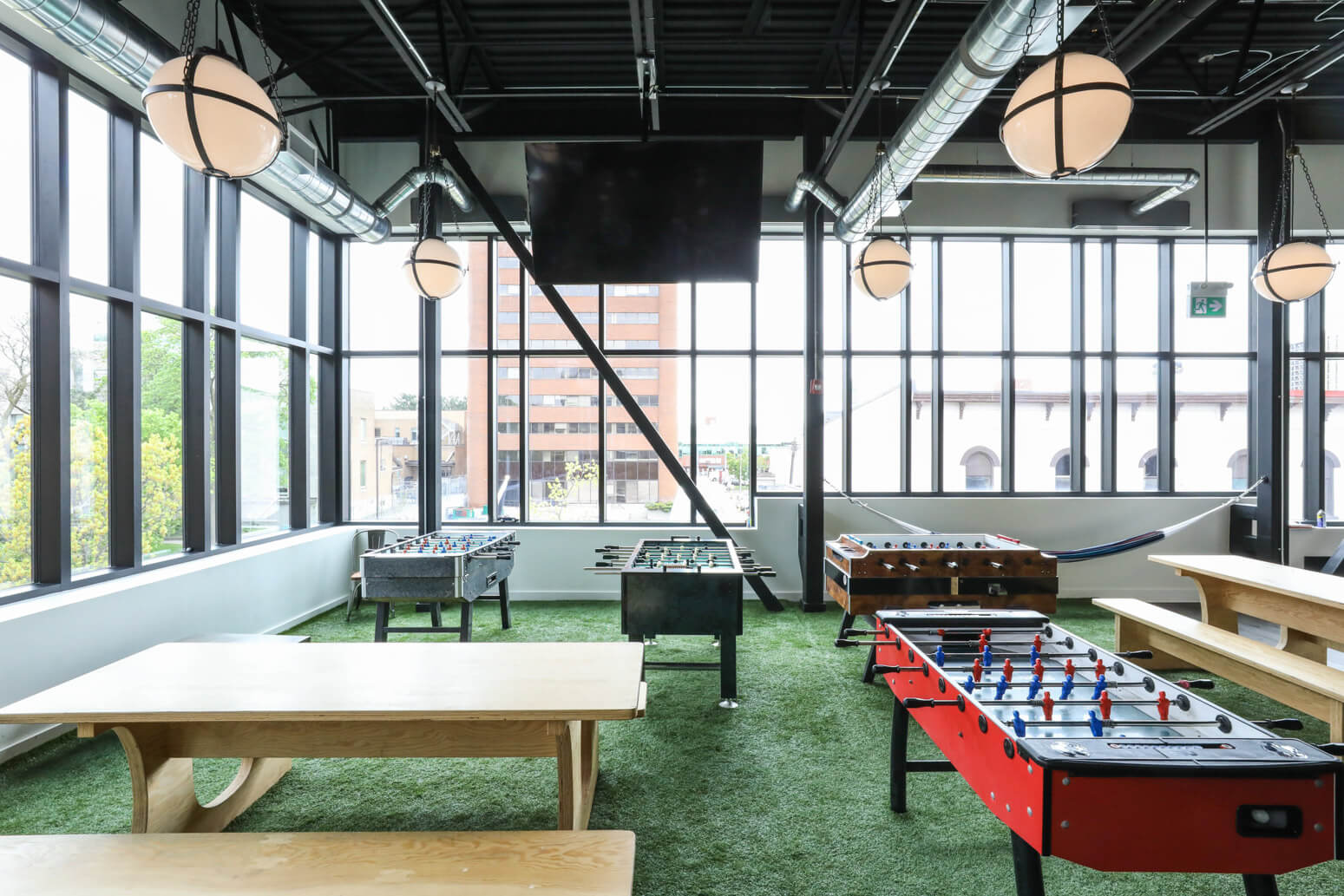 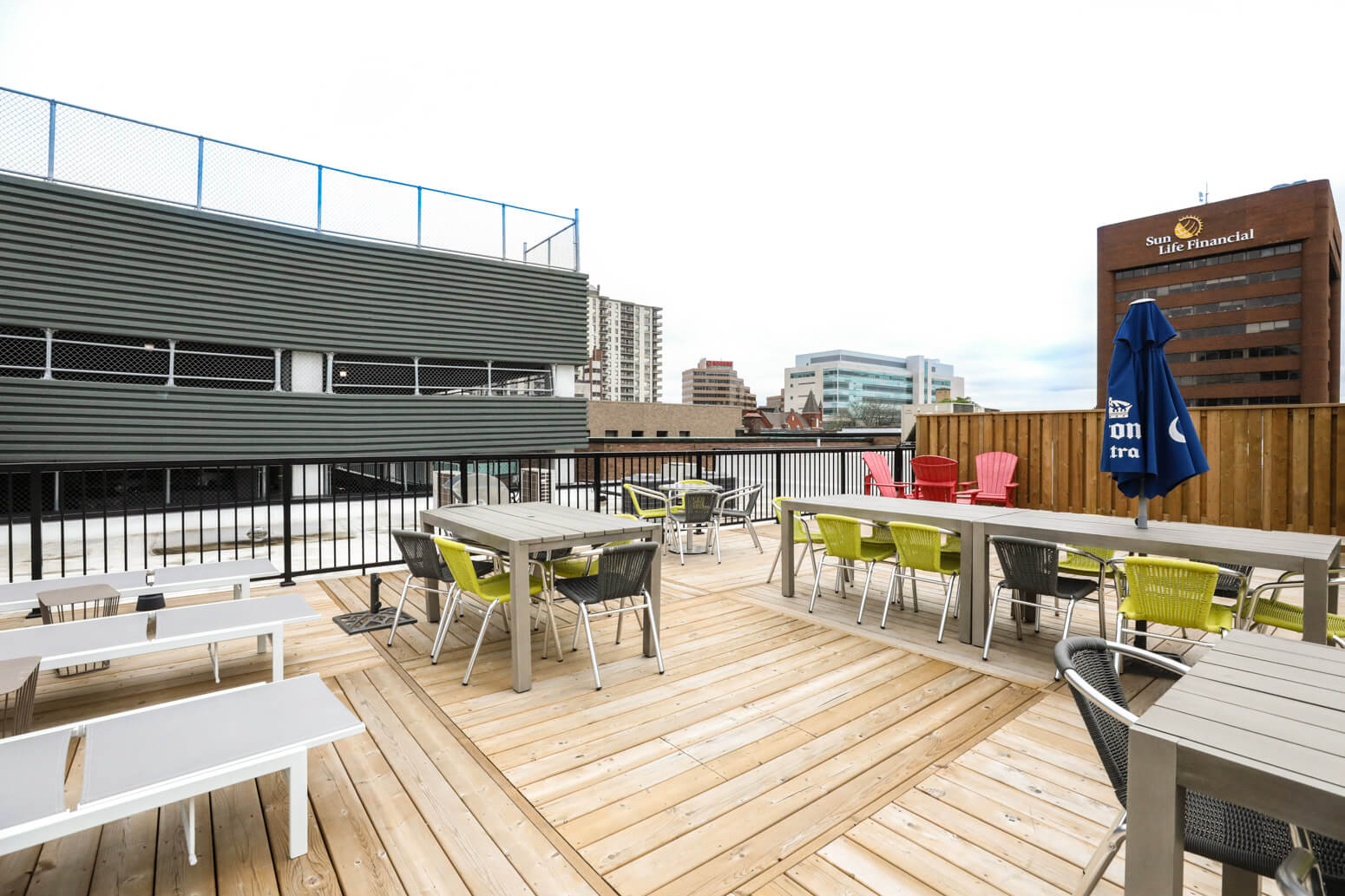