As the founder of two dot-com companies that helped travelers organize their trips, Simpson constantly found himself running into problems with accounting, invoicing and payroll. There was no straightforward solution to handle it all, especially for someone without a deep background in finances. Simpson took it upon himself to dive head-first into the wild fintech world to solve those problems himself.

In 2010, Simpson and James Lochrie founded Wave with the sole purpose to support other small business owners. The startup began its life in the Toronto Reference Library, huddled around a table logged into the free 3G internet. After taking advantage of nearly-free books and wifi, Simpson and his team moved into the basement of a former Wrigley gum factory built in the early 1900s.

Within its first year, Wave lived up to its name as it surpassed 100,000 customers. That is a major milestone for any startup, let alone in the early days of the fintech boom. Since then, Wave has secured over $77 million in investments, partnered with the largest bank in Canada, and manages over $240 billion (with a ‘b’) in income and expenses, plus over $25 billion in invoices. Talk about making the most out of an annoyance.

Now, Wave has figuratively and literally elevated themselves from the basement. The company has grown to almost 250 employees serving over four million entrepreneurs around the world, taking over the entire fifth and sixth floors of the same former gum factory, spanning over 32,000 square feet of in-house-designed office space. 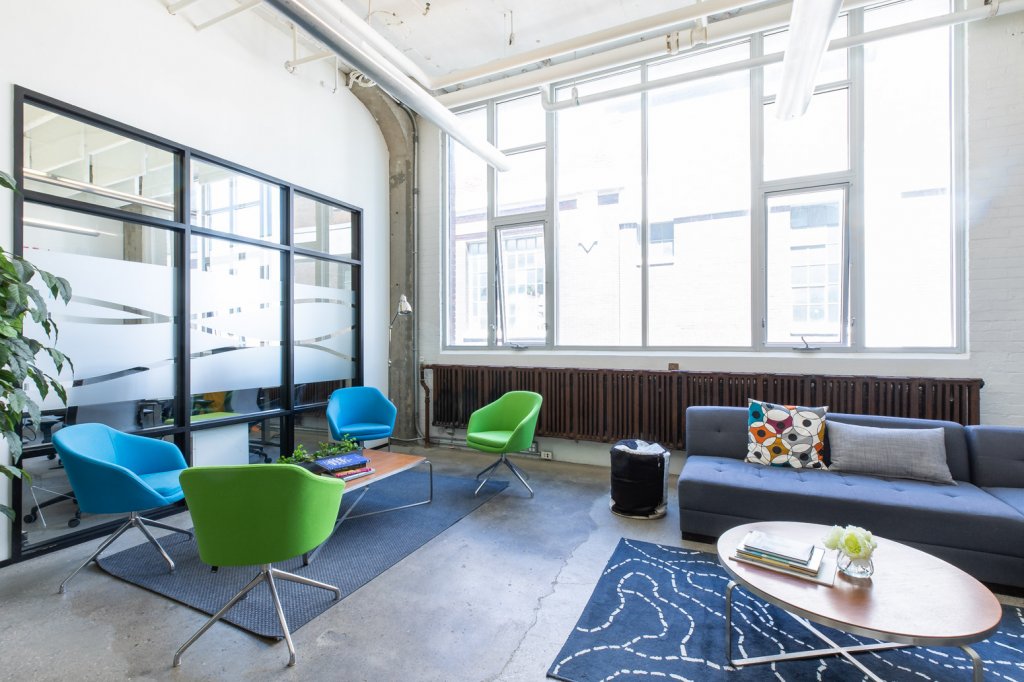 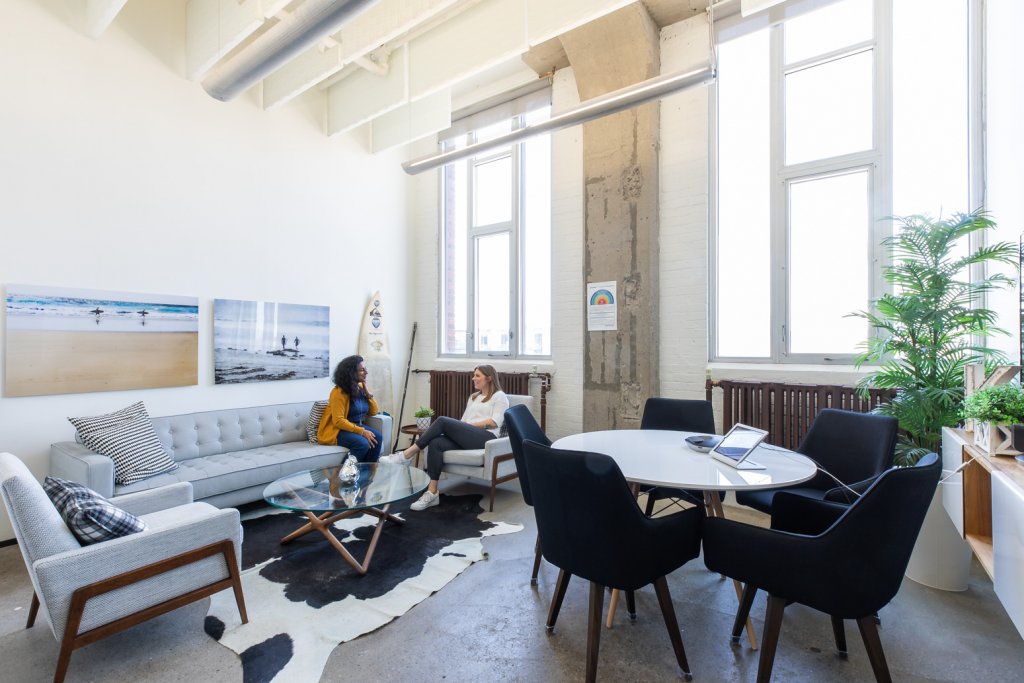 Wave exists to empower small business owners, so the bulk of the company’s work revolves around making their lives easier. This means building free accounting and invoicing products, handling payments in the form of bank transfers and credit card, payroll, and more.

Open-concept and “think out loud” is the name of the game in this office. Several meeting rooms line the perimeter of the two floors, ranging from intimate two-person spaces to mighty boardrooms with room for over 20 people. Every meeting room crosses a financial pun with a movie title: Funding Nemo, Account of Monte Cristo, and Rate Expectations are stand outs, while the risk and fraud prevention team meets in the Risky Business room and the finance team meets in Financey Drew. 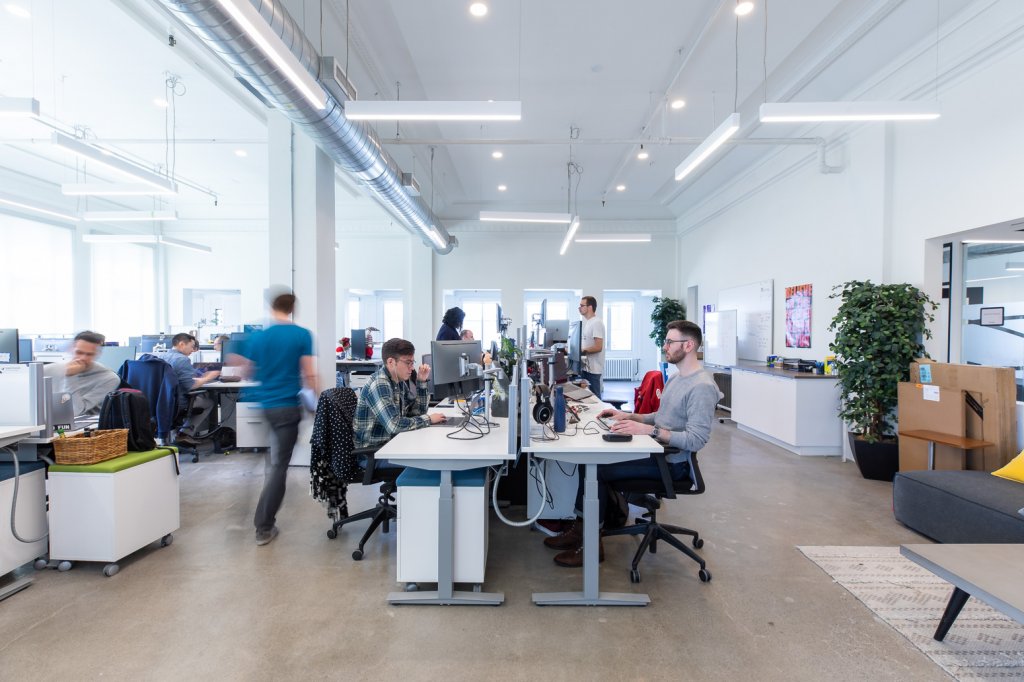 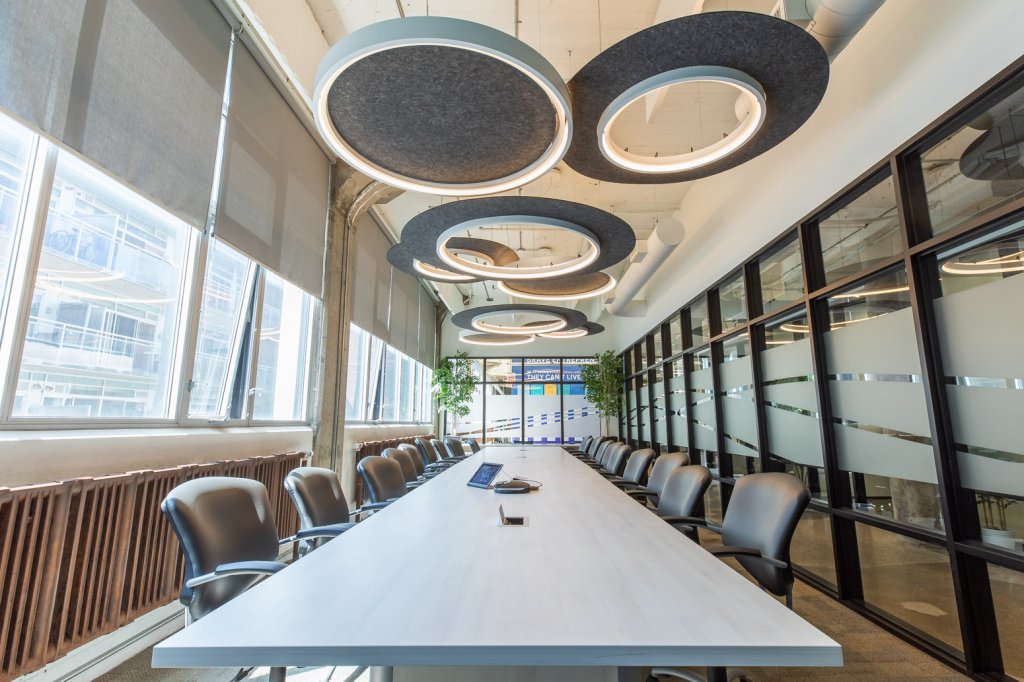 Each ‘Waver’ as they’re called, is part of a team that is strategically placed around the office. Different pods will have members of different teams, all dedicated to rolling out one project or feature. This allows teams to easily answer questions or brainstorm out loud without having to run across the office or disturb other heads-down employees. Software delivery teams work with engineers, product managers, designers, and more, while customer success, marketing, and other teams work together to solve the problems of the small business owner.

A centerpiece of the working culture at Wave is the north star wall, a giant color-coded bulletin board that is peppered with projects and features currently in-progress. Each team at Wave has its own section and uses notes and papers on the wall to display how far along in a particular project they are. Other teams can take a look at what’s going on within the company, and suggest improvements or even build their own projects that augment the ones that are currently being engineered. Once a project is finished, Wavers can go through a bit of a cathartic process and shred their project as a quiet moment of victory. 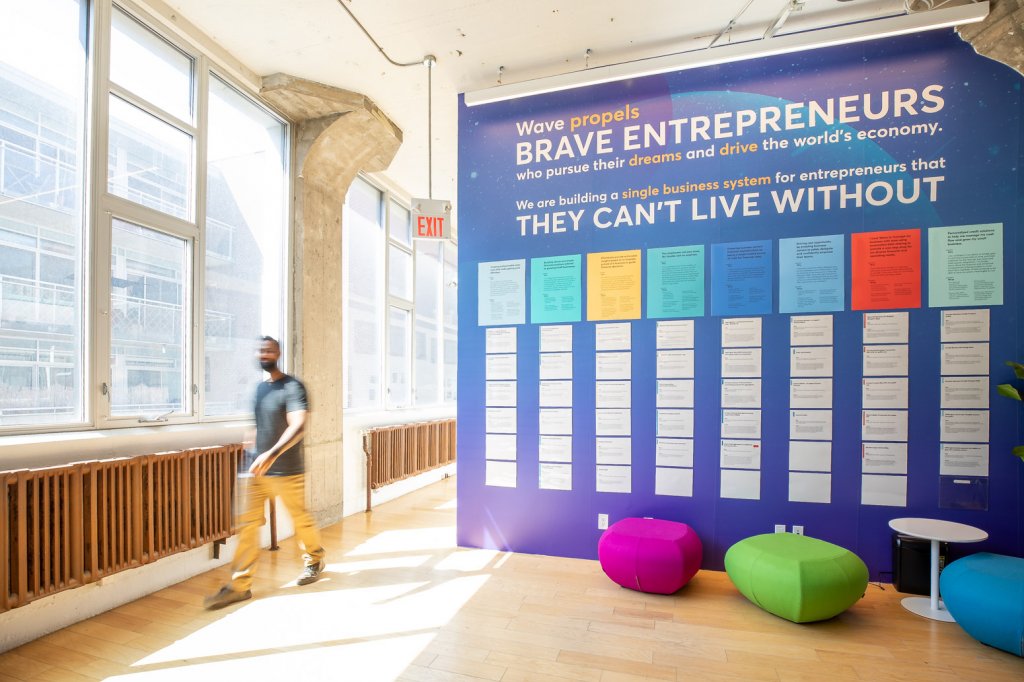 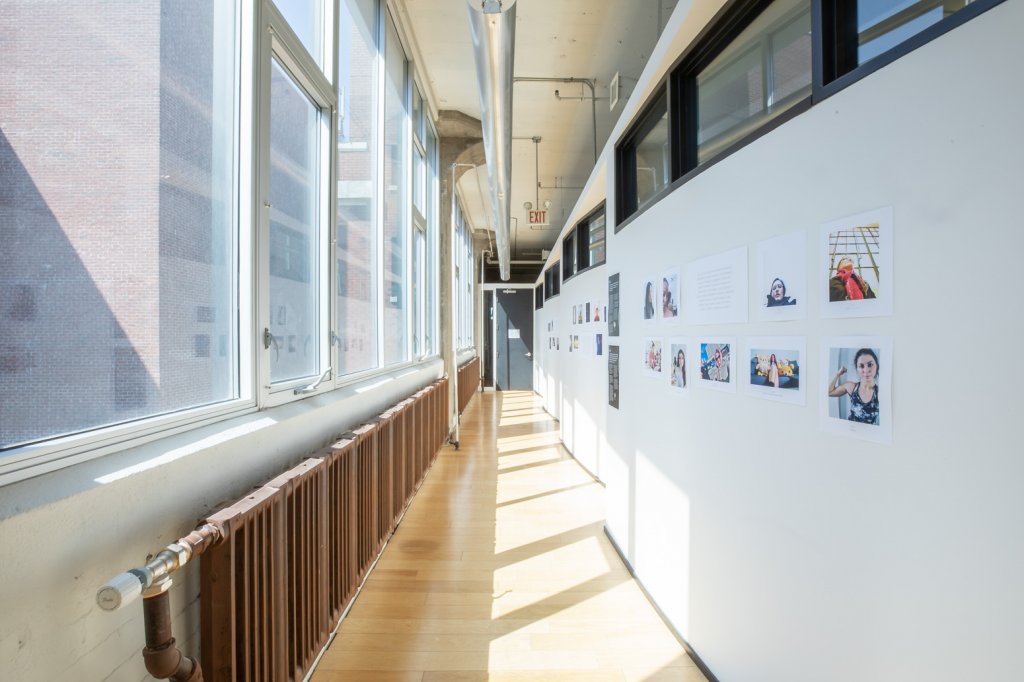 Over 50 per cent of Wave employees have owned their own business, so the office culture is one where they understand the value of balancing work and play. There needs to be a good understanding of belonging and socialization while also fighting for the small business owner and making their lives easier because many of them have been in that situation.

The office itself reflects this kind of balance. Designed completely in-house, the tall ceilings and concrete floors are constantly bathed in light from massive windows on each side of the building. For being a functioning factory at one point, this is a seriously sunny and accessible space to get work done. The saved design cost was reallocated into comfortable furniture and state-of-the-art electric desks and chairs.

One of the main things someone might see as they wander through the office is photos and articles on the walls. These are part of a leadership development course called My Voice My Lens, done through the medium of self-portraits—a concept developed by Wave’s SVP of people and culture, Ashira Gobrin. Workshops help leaders see themselves from the perspective of others through a deeply personal development program. Attendees then have two weeks to take photos, usually with cellphones, then they choose one photo to discuss in a collaborative presentation. Different mediums of writing also adorn the photos. 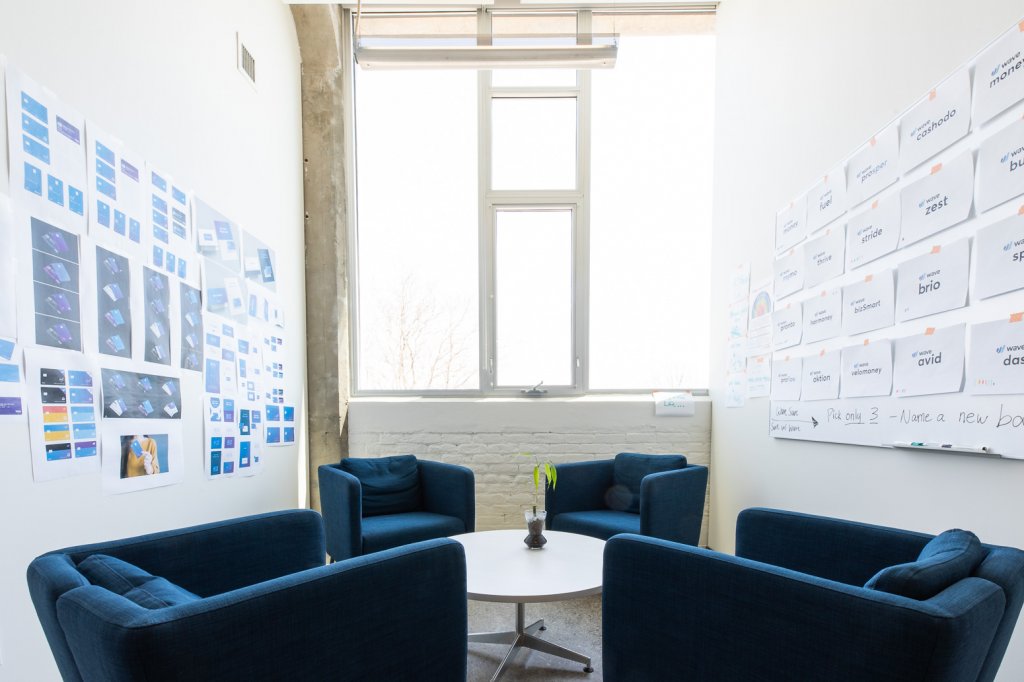 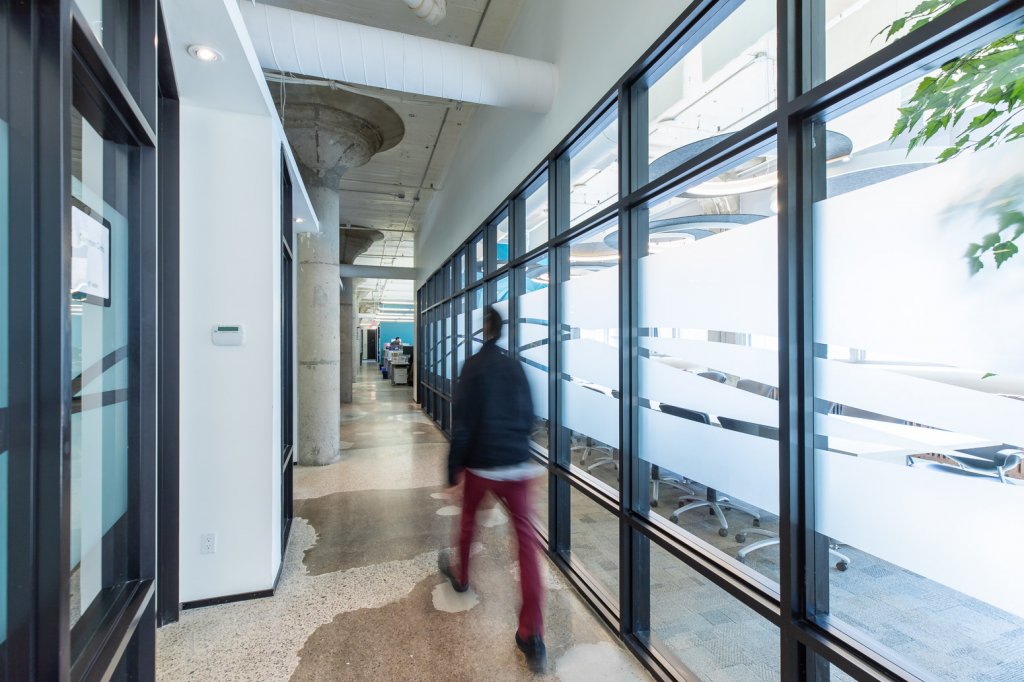 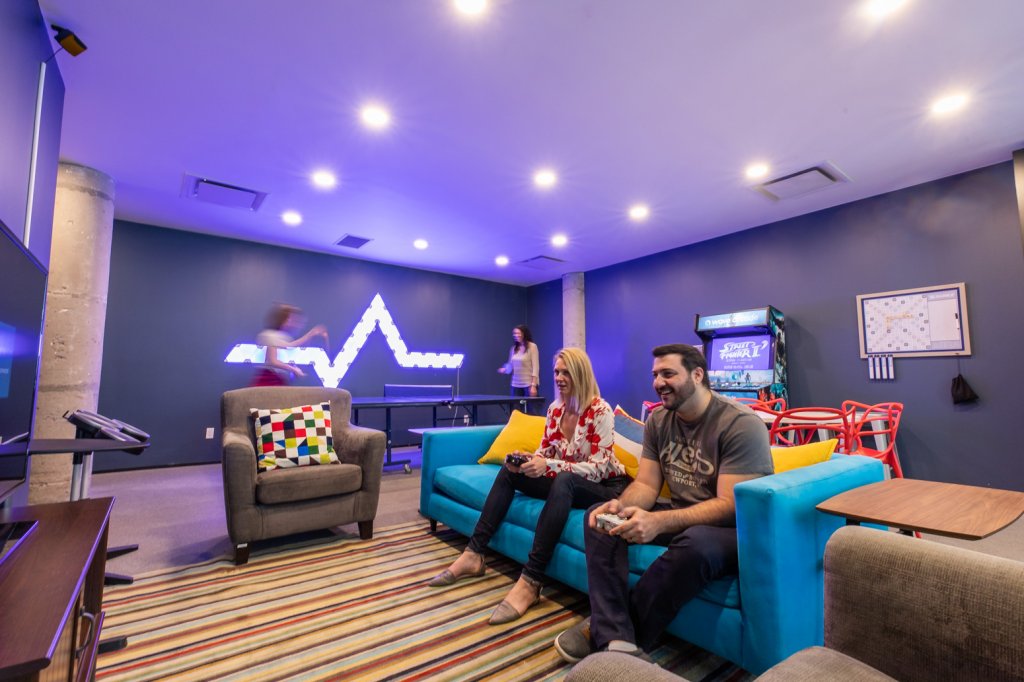 “I really wanted something that transformed people,” says Gobrin. “This is really key for us to build leaders ahead of the curve of the company, and a large part of that is personal awareness—it’s about who you are and how you come across. How do we make sure people are thinking about developing themselves? The collection of photography and quotations now adorn the walls to inspire everyone.”

The result is a gallery-esque vibe that includes thoughtful photos, poetry, and personal essays hanging directly next to the company’s mission statement and product sprint plans. The result is a juxtaposition that truly reflects the community of the company: Artistic creatives looking to empower every kind of entrepreneur.

Of course, art isn’t the only draw for Wave employees. An arcade room has every system imaginable, and Street Fighter tournaments are a regular sight here. Add to that a fitness studio equipped for yoga, boot camps, or massage on any given day. Extra-curricular clubs are a big deal at Wave as well—the company forms road hockey teams for the Road Hockey to Conquer Cancer event, and has raised over $30,000 over the last two years. If road sports aren’t your thing, try the popular cocktail club, where participants mix drinks and pair food after work. Wave also hosts tons of parties and socials on their huge rooftop patio, with one of the best skyline views in the city.

Speaking of pairing food, Wavers are well fed. The office boasts two fully-stocked kitchens along with two each of water coolers, pop fridges, and beer fridges. Workers looking for a bite in the morning can grab bagels, cereal, oatmeal or fruit to power their way to lunch.

Wave’s snacks game is strong too; granola bars, fruit, and trail mix are the mainstays here, along with the less healthy options for the rest of us. 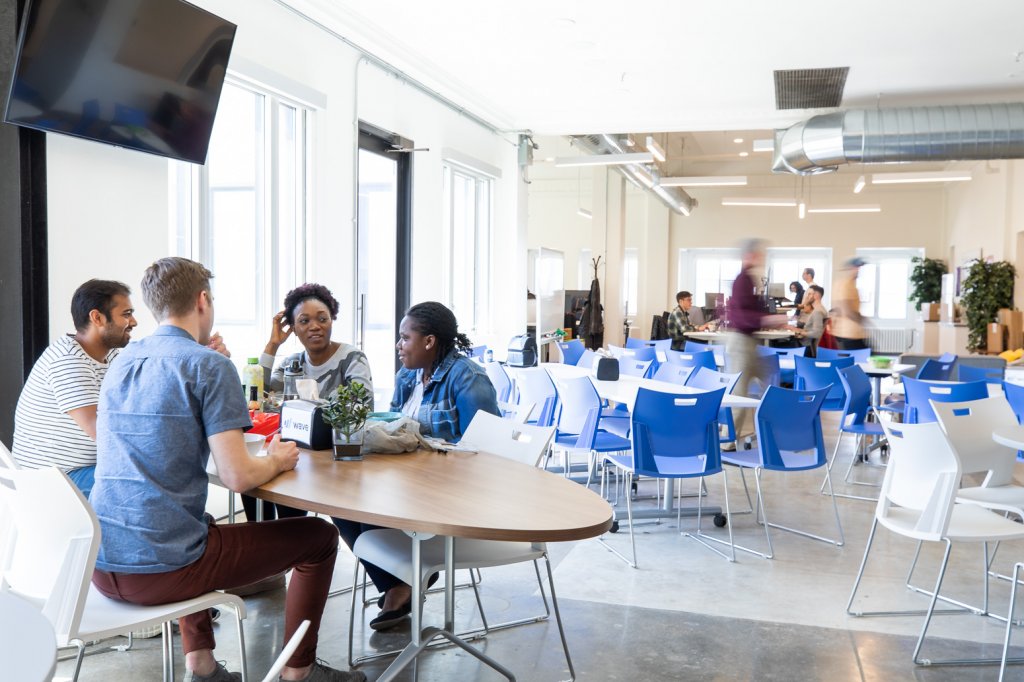 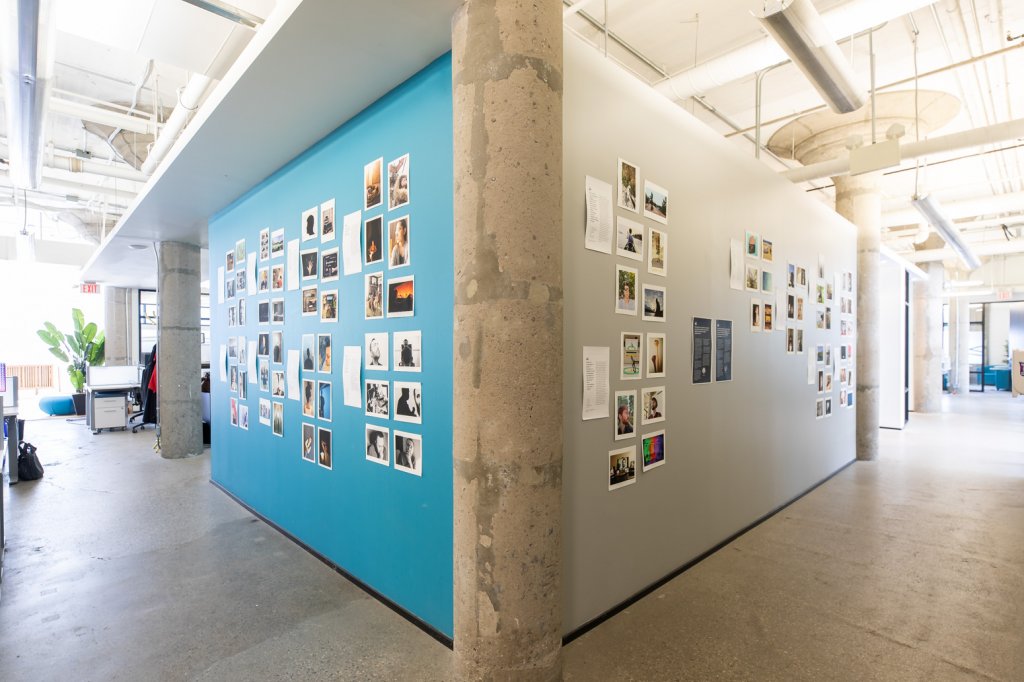 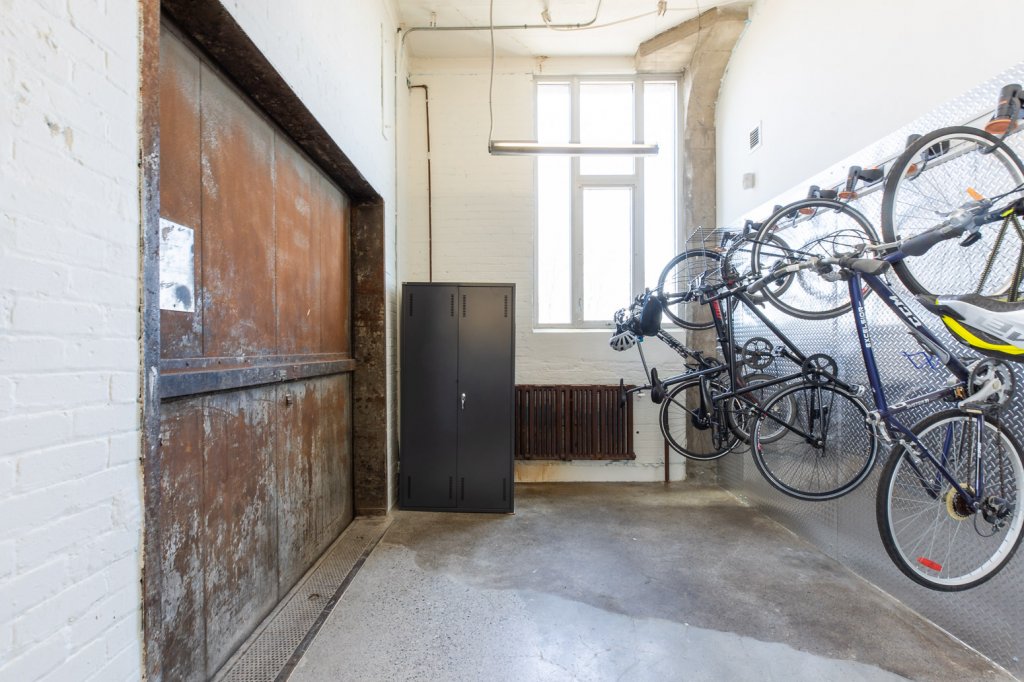 Meals are catered on a monthly basis, but for those who don’t want to leave the office to grab a bite, Wave is currently undergoing a pilot project with another startup called KitchenMate – the newest name in healthy on-demand meals. Picture a stack of healthy pre-made meals ready for anyone who can’t get out of the office for lunch that day. Throw it in the KitchenMate machine, and minutes later they have a nutritious lunch they can eat, all without leaving the office.

Coffee is, of course, a big deal. Two Jura espresso machines and four CX3 Touch machines are spread around the office, fully stocked with beans from local roaster Muldoons. Wave even did a survey and found that the coffee drinkers outnumber tea drinkers 2:1, so the coffee culture has to be on-point.

Every Wave employee gets their employer-paid benefits package from day one, which includes $500 each for both wellness and education, plus a conference budget, paid volunteer days, onsite fitness camps, and more. There is indoor storage for over 20 bikes, and showers on-site if your commute left you less-than-fresh. If all you need to be well is your four-legged friend, the office dog-friendly as well. 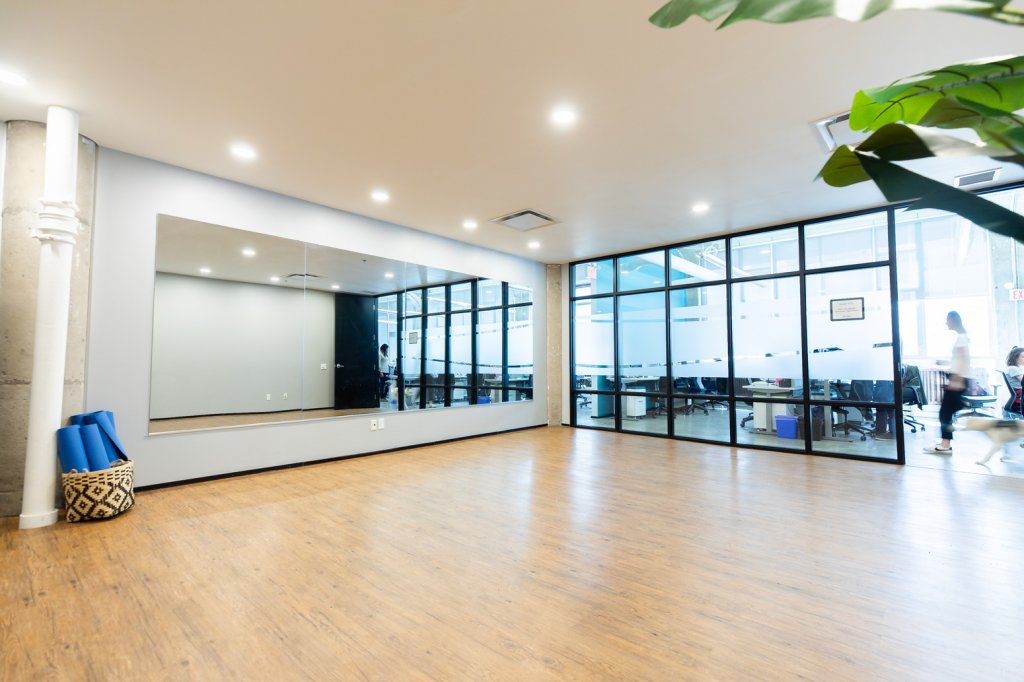 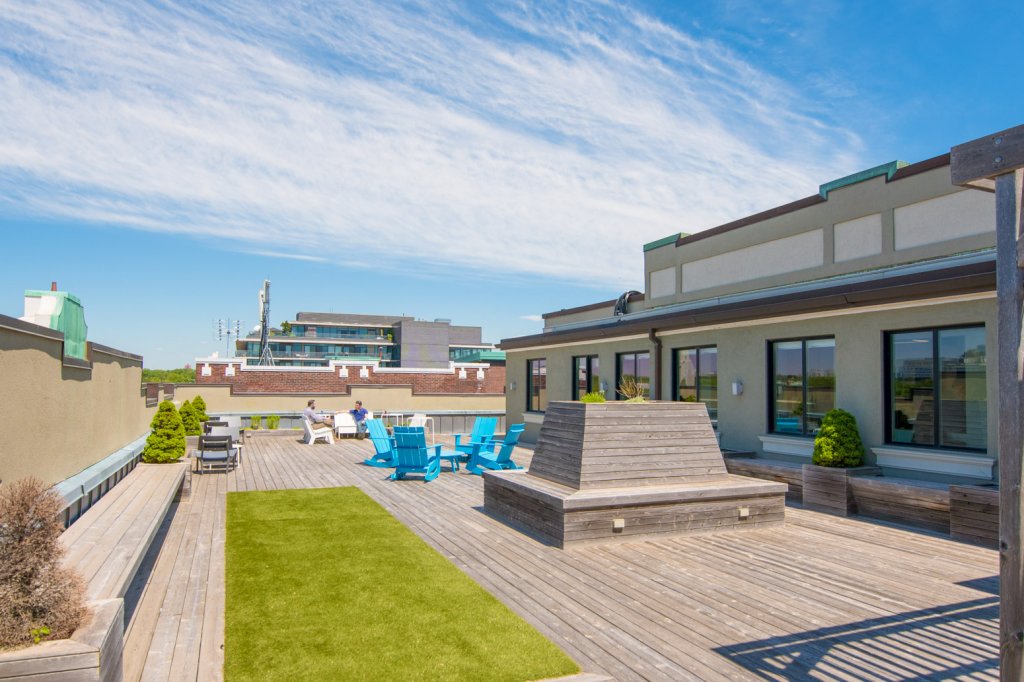 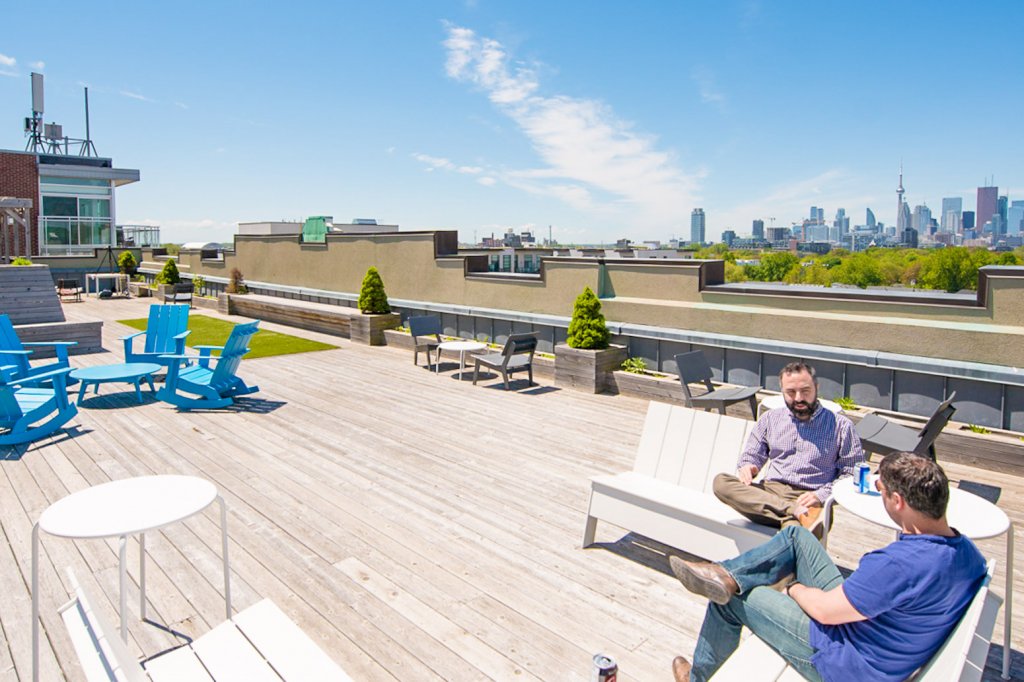 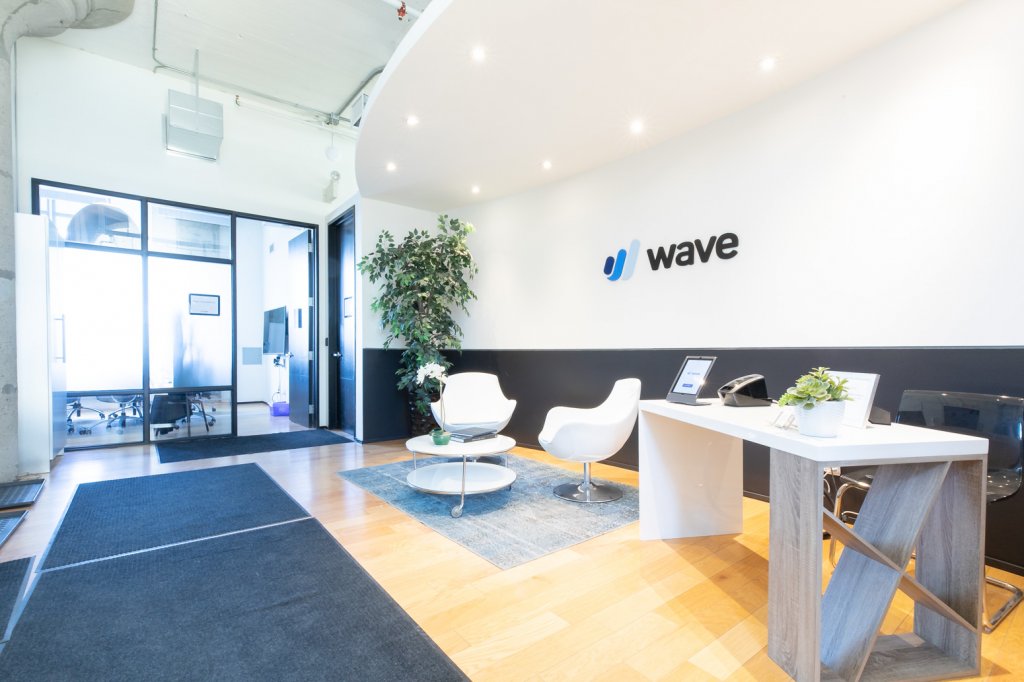 Do you have an amazing office and would like to be featured here? Get in touch with us: killerspaces@techvibes.com.