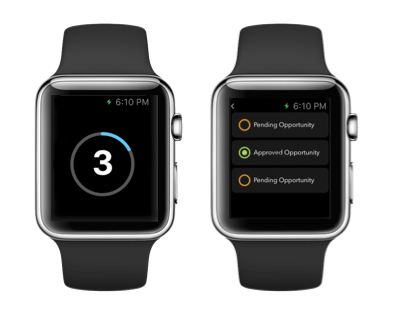 The wearables market is tech’s fastest-growing sector. From devices like the Apple Watch to Fitbit to Oculus Rift, the breadth and sophistication of wearables in the market continues to grow at a rapid pace.

That’s why Salesforce says it is so excited about this space. The company believes heavily in the enterprise value of wearable technology. Wearables feel consumer-focused, but Salesforce says any wearable hardware is just one good app away from becoming a powerful industry tool.

According to a Salesforce report, seventy-nine percent of enterprise adopters agree that wearables are or will be strategic to their company’s future success. Seventy-six percent report improvements in business performance since implementing wearable devices in the enterprise. 86% plan to increase wearable technology spend over the next 12 months.

Lindsey Irvine, who heads wearables at Salesforce, spoke at Dreamforce in San Francisco about her company’s strategy in the space. Salesforce is targeting developers with a kit to bring the necessary apps to existing hardware. It’s also investing in and partnering with wearable tech companies, including an investment in Canada’s own Nymi. The Nymi wristband authenticates a user’s identity using their unique electrocardiogram.

Nymi, a former Techvibes 20 company, raised a $14 million Series A round of funding last year that included Salesforce Ventures.

“Wearables are the next phase of the mobile revolution,” said Daniel Debow, SVP, emerging technologies, Salesforce.

In addition to Nymi, Salesforce also has developer kits for Myo, the flagship product of Canada’s Thalmic Labs, and Pebble, a smartwatch which was born in Canada.