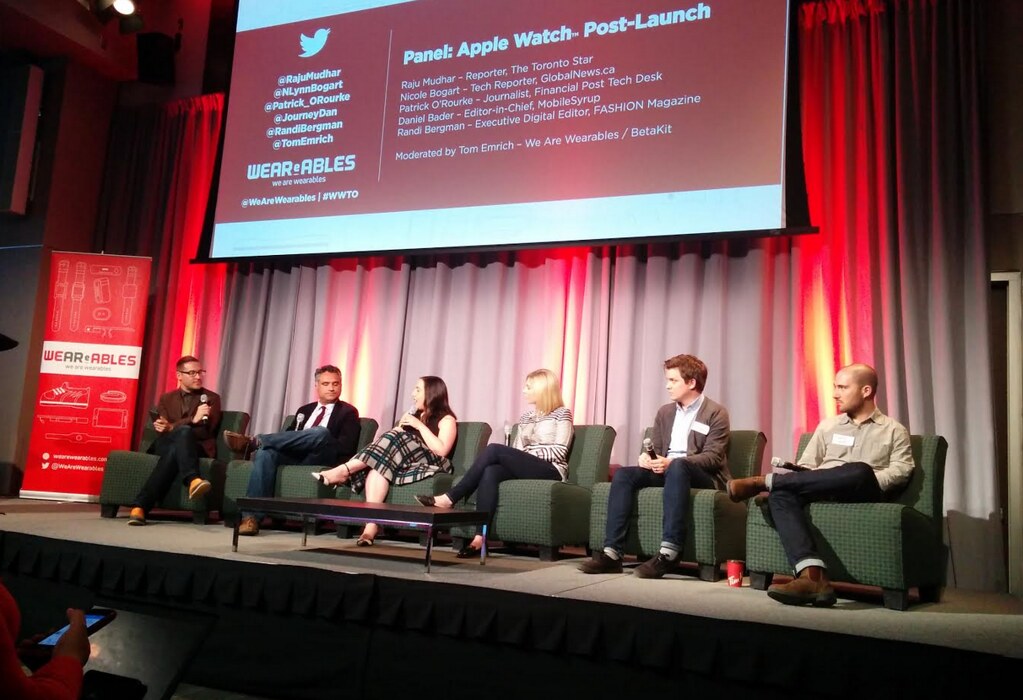 The April 10 pre-order launch of the much-hyped Apple Watch has had tech enthusiasts wondering how the smartwatch will change the way people interact with tech on a daily basis.

Almost a month later, Tom Emrich of We Are Wearables hosted his May meetup for the group last night, bringing together journalists to discuss the media reaction to the watch and give their opinions on the product. Emrich also hosted the launch of Linkitz, a wearable targeted to young girls to encourage them to pursue STEM careers that has currently raised $20,000 on Kickstarter.

The event brought journalists from varying beats and specialties to provide interesting perspectives on the impact of the Apple Watch. They were Raju Mudhar, a reporter for the Toronto Star’s entertainment section; Patrick O’Rourke, a tech journalist for the Financial Post; Daniel Bader, editor-in-chief of MobileSyrup; Nicole Bogart, a tech reporter at Global News; and Randi Bergman, executive digital editor of FASHION magazine in Canada.

A major theme of the night was how differently Apple framed the watch; rather than emphasizing how it would change the world of tech, Apple promoted the watch as a fashionable accessory.

“The word smartwatch was never uttered during the keynote, which I think is an important takeaway,” Bader says. “The difference that Apple wants people to take from this Watch versus the Android Wear or Pebble is that this is supposed to be something you wear on your wrist that’s beautiful.”

While Mudhar balked at the price (the most expensive one is $13,000), as the resident fashion expert on the panel, Bergman says the availability of this expensive option only speaks to the ‘luxury’ image that Apple is trying to convey with the Watch, saying that in the fashion world, that’s the price of a pair of shoes.

“Late last year they hired people from Louis Vuitton and Burberry, and those are people that deal with luxury items all the time,” she says. “They’re targeting all these top players and they’ve marketed it specifically to places like Vogue China, so all those pieces fall into the exact market that they want to whether or not it continues in the later editions.”

They also talked about the difference in the retail experience of the Watch compared to past apple products – the Apple Watch can be tried on in the store, but can only be purchased online.

“It makes sense because of the type of the device that it is, but from a consumer perspective, people were showing up thinking they could buy it that day,” O’Rourke says. “So I think there’s still a lot of confusion for the average consumer.”

Bogart, a former Apple store employee, personally isn’t a fan of the retail experience, which seems to mimic a high-end fashion store.

“I felt like I was in Holt Renfrew trying on a $13,000 dress, having someone go ‘Oh, that looks so beautiful on you darling,’” Bogart says. “This is a technology store. I want Apple to be that tech brand, and I want it to be focused on the technology. I haven’t seen that in the retail experience yet. It’s more about making it an accessory to your personal style.”

The meetup also featured a second panel from some of the first app creators for the Apple Watch to talk about how they were taking advantage of the new tech. They were Jay Mehta, a senior strategist for Tangerine Bank; Craig Saila, director of digital products at The Globe and Mail; Taso Perdikoulias, director of web and mobile for ecobee; Jason Hyde, vice president of creative and user experience at Plastic Mobile, the company behind Pizza Pizza and Realtor.ca’s apps; and Jonathon Savage, who leads theScore’s mobile and digital platforms.

As the screen is obviously incredibly small, it was interesting to see how different companies used the products for their audiences. “What we really focused on was creating a great user experience and delivering breaking news, so people can scan through it whenever they want to,” Saila says.

“For us, [creating an app] was a no-brainer because sports fans are extremely passionate about the sports teams and players they care about, so there’s an emotional connection on the app.” Savage says.

While the Watch has been hyped for a long time, the fact remains that its use is still fairly new in the consumer space – and it will be interesting to see how it people use it on a daily basis and whether smartwatches will find wide adoption because of Apple’s brand name. “There is such brand equity in Apple and such good will towards the brand,” Mudhar says. “Because of Apple’s fanboy status, I think that’s played a huge role in the acceptance of the product as it is.”