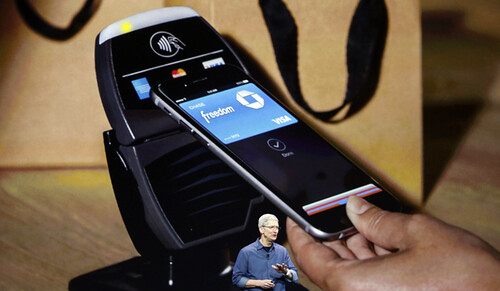 Among the bevy of announcements at Apple’s Sept. 9 iPhone event, Apple Pay must be considered the most impactful.

But Tim Cook and his entourage only got one thing wrong: Canada – not the U.S. – should have been where it launched. If that seems counterintuitive considering our nation’s reputation as a technological laggard, then consider the merchant’s side of the equation.

Apple announced two dozen retail partners along with Apple Pay. This may have left Canadians scratching their heads: shouldn’t it work everywhere already?

Though tech and services created in the United States can take months or years to arrive on the sunny beaches of Canada, we lead in one major category: PIN-and-chip card and terminals, and contactless (NFC credit card) payments penetration.

Considering the merchant side

Most of our major retailers already have the terminals required for contactless payments using NFC phones or credit cards. Today, Canadians can confidently walk into a McDonalds, Loblaws or Starbucks and make a purchase using NFC at a payment terminal that was designed to accept newer PIN-and-chip cards and contactless (or NFC) payments.

In the U.S., you would be hard-pressed to do the same. Moneris, Canada’s largest processor of credit and debit card payments, with three Canadian offices and one in Chicago, estimates that only 5-10% of payments terminals in the U.S. have newer PIN-and-chip technology.

Though contactless payments don’t require PIN-and-chip technology, many merchants have delayed upgrading their terminals to accept PIN-and-chip and NFC payments.

“Contactless has actually been available in the U.S. earlier than chip-and-PIN, but has not advanced,” Karen Cox, VP of Payments & Retail Solutions at Moneris said in an email. 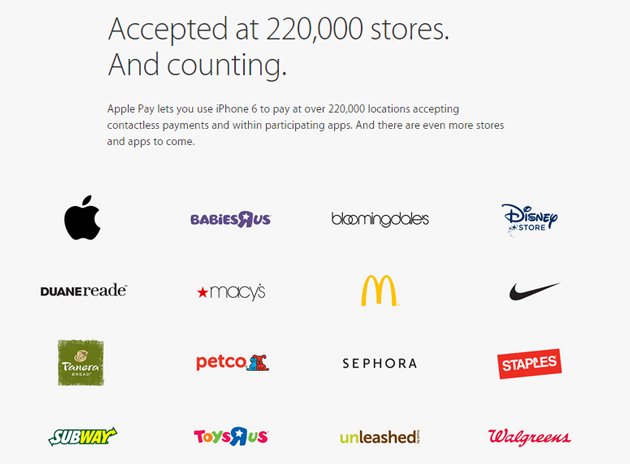 Apple had to strike deals with McDonalds, Subway, and Walgreens to make sure they had the proper terminals for NFC payments when Apple Pay rolls out. Without Apple using its muscle to persuade these retailers to adopt contactless payments, Apple Pay users would have a great piece of tech and nowhere to use it.

Notably, Walmart and Best Buy chose not to participate in Apple Pay, instead throwing their support behind a the QR code-based app called CurrentC – which will work without NFC phones and terminals. CurrentC can also bypass credit cards by linking with a chequing account.

In short: American retailers continue to not only delay NFC adoption despite Apple and the increased security offered by PIN-and-chip cards, but are developing new systems to circumvent it entirely. Like universal health care, Canadians are left to wonder why the U.S. can’t just get on with it already.

In the case of NFC, Canucks can thank Interac for our advanced NFC adoption.

Interac, Canada’s not-for-profit institution that coordinates debit payments among banks and merchants, set a 2012 deadline for merchant adoption of chip-and-PIN technology in Canada by shifting liability to merchants for fraudulent payments made using swipe cards. In the United States, that deadline is not until 2015.

“In regions such as Canada, we rolled out Chip / PIN [and] contactless almost concurrently from an acceptance and card issuance perspective,” Cox wrote. In 2015, when the liability shift is imposed in the U.S., many merchant will upgrade their terminals and accept both PIN-and-chip and contactless payments.

“This will give the U.S. impetus for NFC,” Cox wrote. “New terminals themselves all come with contactless capability if not enablement.”

A 2013 Venturebeat article, citing Juniper Research, illustrated the difference between the U.S. and the rest of the planet for contactless payments.

“In the U.S., it is thought that no more than 2 percent of retailers offer contactless POS terminals: the ratio of contactless cards in issue to terminals is around 600 to 1,” Juniper research says. “This compares with ratios of around 200:1 in the UK, 70:1 in Poland, 50:1 in France and 15:1 in Spain.”

In February 2014, Rogers Communications VP David Robinson explained a stark contrast, as noted in the lede of this Venturebeat article.

“In Canada, 75 percent of major retailers accept contactless payment. In the U.S., fewer than 2 percent of retailers do the same,” Venturebeat wrote.

“Ten percent of domestic transactions are contactless … and that’s going up about 1 percent a month,” Robinson explained.

Mobile phone-enabled payments have a well documented (and lamented) struggle to gain adoption. Whether it’s PayPal’s app, Google Wallet or Square Wallet – not to mention your bank and cell phone carrier – no app or service has yet been able to gain mass adoption in the U.S. or Canada.

Case in point: Android-based phones have long had NFC hardware, but credit card and debit transactions are still the standard – even in a contactless payment haven like Canada.

Apple could have planted its seed in fertile ground, but instead chose to pursue a bigger piece of the pie. When Apple gets done bringing contactless payments to the U.S., a rapid rollout in Canada will be next – and obvious – choice.

This article first appeared on the Dx3 Digest.