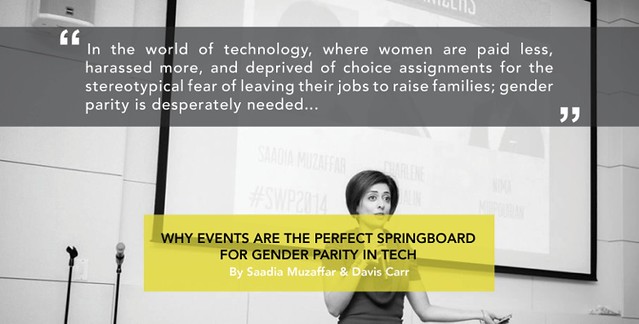 When attendees walked into the BSidesLV Hacker Conference this past August, which is sponsored by tech companies like Yelp, Microsoft, BlackBerry, they were welcomed with a “colosseum” of condoms. You can imagine the discomfort that would induce amongst the women at the event, given the alarming prevalence of reports of sexual harassment against women at tech conferences in the news.

Contrasting that, on a sunny weekend in June more than 100 people came together for Startup Weekend Peel at Microsoft Canada headquarters. The organizers prioritized gender parity as a core tenet for the event and succeeded by ensuring women made up one half of all mentors, judges, coaches, and facilitators. Perhaps logically, almost half the participants that registered, ended up being women. Four of the eight teams selected to compete were led by women, an unexpectedly perfect illustration of parity.

In the world of technology, where women are paid less, harassed more, and deprived of choice assignments for the stereotypical fear of leaving their jobs to raise families; gender parity is desperately needed at highly visible, media-intensive events geared to apprise tech movers and shakers on what to expect in the near future, to define the new “normal.”

Speakers at conferences have power. Identified as authority figures, who they are and what they represent carries enormous influence. When every panelist is a white male, what does that say to the diverse range of women and men in the audience? It says that you don’t belong there. It says that you do not have authority. And the ramifications of that spill outside of conferences and into corporate boardrooms, HR policies, and how consumer technology is designed.

In 2014, this is unacceptable. In fact, it is downright shameful.

As participants, as organizers, as attendees, as speakers, as panelists, we have a collective and individual responsibility to demand change. Here are a few key places to start:

If you are a man— particularly a white male—you need to acknowledge that you are surrounded by a system of privilege, one that is so omnipresent that it is likely invisible to you (John Scalzi illustrates this well here). Please use your position of privilege-by-default to be an agent of change.

When you are invited as a speaker or panelist at an event, ask how many women are a part of the panel or speaker line are up. Refuse to speak on all-male panels. Take the #genderbiaspledge and tell organizers that gender parity is an important value to you, and that you will only speak/participate if there are women on the panel. Make public statements to this effect. Tweet about it. Encourage dialogue with your peers. Be an ally by publicly supporting others who are doing the same.

If you are a woman, know that we can make an incredible difference by signal-boosting one another. If you are the token woman on a panel, ask that the organizers aim for parity. Refer other expert women in the industry. Don’t settle for just one token representation—demand media and tech organizations to put parity on their top 3 priorities when creating these trailblazing events. Don’t be shy, and don’t be quiet. Speak up, and speak loudly, and often, and don’t stop until they listen. List yourself in resources such as Code Women Speakers and TechGirls and refer event organizers to these resources to source other speakers through.

Organizers have an obligation to make diversity and gender parity a high priority on the agenda or the symbols of innovation that our tech events need to be will stay stuck in these lopsided representations that perpetuate toxic environments of misogyny, racism, ableism and homophobia while alienating a large portion of engaged audience members.

As the public, we have an obligation as well. Our complacency allows this cycle to continue. We are complicit in this imbalance. We need to start questioning the status-quo. Call-out conferences and organizations that don’t explicitly aim for gender parity. Let’s make a collective fuss about how we want the world and workplaces structured for ourselves and the generations to come.

We can’t continue to flaunt the abysmal statistics about diversity around and lay it all on women not opting for science and technology careers. As Fortune Magazine recently noted, women leave tech because of the culture, not because “math is hard.”

We need to stop pretending that online rape and death threats; hurled at women on a devastatingly regular basis, and the offline gap in gender parity are unrelated. This hostility is toxic for women as well as men and fixing it is the responsibility of all stakeholders and influencers in the sector. Tech’s diversity problem isn’t so much the pipeline – it is the entrenched patriarchy, and it’s high time we eroded that.

For our high-potential hallows of tech to be a reflection of equitable opportunity and an acute reflection of the world at large, it shouldn’t feel like we’ve walked through a dude-bro warp zone with 2% to 14% women on the flip side.

Overhauling systemic biases takes time and effort. You have to work at it, each and every day, every single time. It requires conviction, leadership, foresight and a whole lot of tenacity. It also produces remarkable results. Startup Weekend Peel proves that gender parity is not only possible, it is infectious and tide-raising and impactful.

We should start with events as the emblem of parity. No more excuses.