The trials and tribulations of Amazon’s HQ2 search continue as hiring startup Textio has shared some information that may serve to place Montreal above some other Canadian destinations.

After pouring over 250 million job posts and hiring outcomes, Textio found that on average, Montreal was the quickest city in Canada to fill all vacant engineering roles, taking an average of just 20.2 days. In comparison, Toronto takes 41 days on average. One of the larger requirements in Amazon’s HQ2 RFP is that new talent must be easily found and hired.

The two cities ahead of Montreal are Birmingham, Alabama and Grand Rapids, Michigan, taking an average of 15.5 and 17.7 days respectively to fill open engineering jobs. However, both of these cities are well below the population Amazon is looking for, while also lacking widespread infrastructure or massive governmental incentives. In fact, if the new 50,000-person Amazon HQ2 landed in Grand Rapids, it would grow the population by 25 per cent.

There have been plenty of expert opinions levied regarding where Amazon will land. Geekwire chose Toronto as their lead, while CNN selected Atlanta and Venturebeat prefers Austin as their choice. Multiple reports have put Denver and Calgary at the top of the list. Denver takes an average of 32 days to fill engineering roles, while Calgary was not listed. 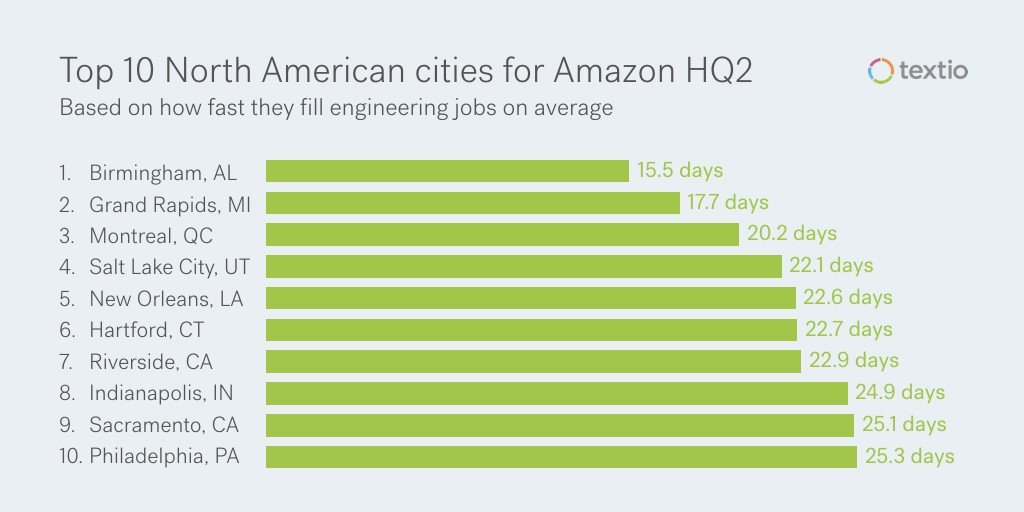 These figures are merely kindling for the fire that Amazon is stoking in their boardrooms at the current Seattle headquarters, as no frontrunners have been named yet. Many seem keen on a Canadian destination, as Amazon specified anywhere in “North America” and not just the U.S.

Amazon is, of course, looking for more than engineer hiring speed, but this stat shows how much the e-commerce giant has to consider when scouting for a new location.

Over 100 cities are vying for the new destination that will see massive amounts of revenue brought to the winning location. But it might not be all good, as just like a bid for the Olympics, Amazon coming to town is intrinsically good but comes burdened with a few minor side effects.

Applications for the HQ2 are due by October 19, and we may see a rumbling of rumours surface right after then.