While women are less likely to turn to crowdfunding platforms to raise capital, when they do they’re more successful than their male counterparts.

A new report by PwC found that female-led crowdfunding campaigns are 32 per cent more successful at reaching their funding targets than those led by men – regardless of industry.

PwC analyzed two years of seed crowdfunding from 450,000 campaigns across nine platforms in collaboration with the Crowdfunding Centre. The data showed that 22 per cent of campaigns by women entrepreneurs hit their funding targets, where as men were less successful at 17 per cent. 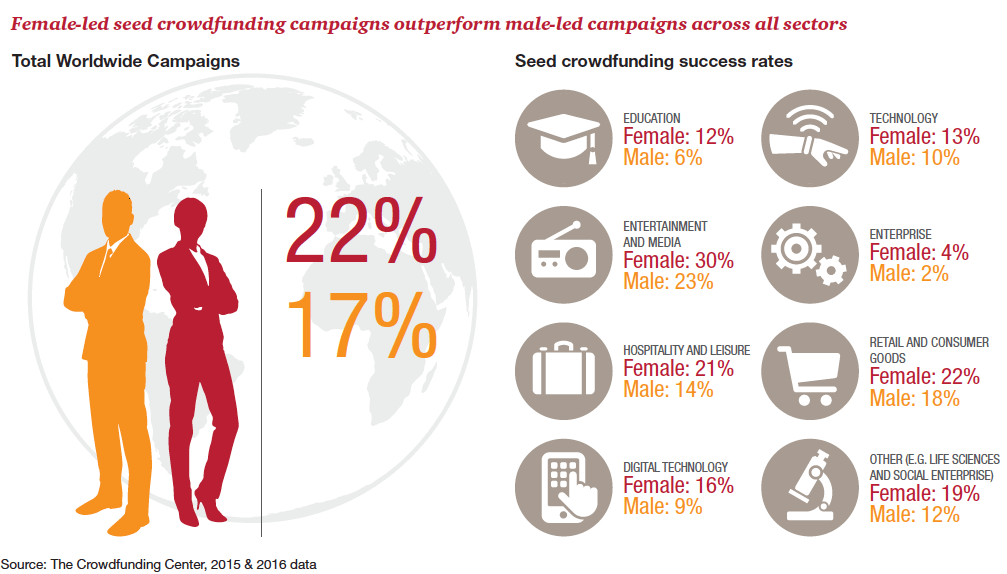 Female entrepreneurs continue to receive less seed funding through traditional funding channels such as banks and venture capitals, which the report points out are male-dominated industries.

“There is definitely bias, we see that all the time. It comes from a lack of women in the VC space who can bring behavioural understanding, but it also comes from the idea that women are conservative to scale up or that they will leave the business – for a VC that is something that plays,” said Citibank India Consumer Business Manager Shinjini Kumar.

But when it comes to crowdfunding, the report found that women-led businesses don’t face the same barriers in the non-traditional funding arena.

Crowdfunding creates an equal opportunity for women entrepreneurs and democratizes the funding playing field since entrepreneurs are turning to thousands of backers in a gender-balanced space.

When it comes to technology ventures–where there are nine male crowdfunders for every female–13 per cent of women achieved their funding goal compared to 10 per cent of men. Women also pulled ahead in the digital technology sector with a 16 per cent success rate whereas only nine per cent of men were successful.

“The ground rules are different for seed crowdfunding as compared with traditional marketing and selling, where you are telling the story and building a relationship rather than just appealing to a need,” said Crowdfunding Center co-founder Kay Klug. “Women tend to be much more relationship focused so this often comes more naturally than for men.”

Crowdfunding through platforms such as Kickstarter and Indiegogo has gained legitimacy as a innovative way for entrepreneurs to raise seed money – and for now women have the competitive advantage.