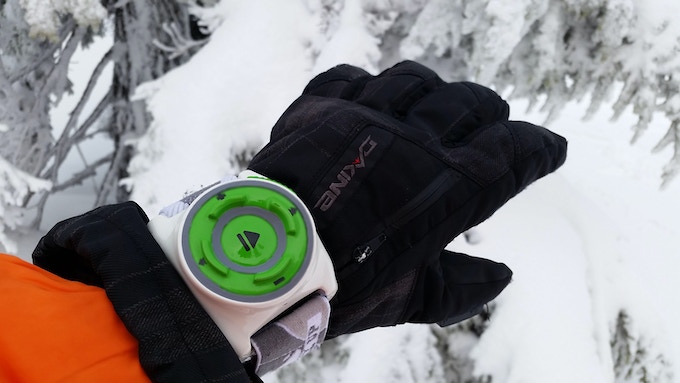 They say they’re big fans of listening to music when they’re hitting the slopes.

But Darius Sahebjavaher didn’t like the fact that any time he wanted to change the song, or adjust the volume, he had to take off his gloves. Unable to find anything on the market that would solve the problem, he decided to do it himself.

The pair have created a wrist-worn device that fist over a user’s gloves and can control their smartphone.

“This way you can leave your phone in your pocket and use YodelUP to control the functionality without having to take off your glove,” says Ramin Sahebjavaher.

The Sahebjavaher brothers are currently raising money through a crowdfunding campaign to bring the device to market.

The device looks something like a watch – but instead of a face it a has a few basic controls for music playback, the controls almost reminiscent of those of an old iPod.

While the brothers say they’ve talked about making a device like YodelUP for years, last April, Darius Sahebjavaher decided to take the plunge.

“We went from an idea that we had many years ago, but once we pulled the trigger to actually start doing it,” Ramin Sahebjavahersays. “It was a rather quick process.”

While development may have only taken a few months, the brothers say they went through numerous iterations on both the internal electronics and the ergonomics of the device.

“The ergonomics was a big deal because you have to essentially feel the buttons with your gloves on,” says Ramin Sahebjavaher. “We wanted to make sure we have a device that you can work without having to look at while you’re riding down. We went through probably 30 iterations of ergonomic design.”

Making something that would perform well in the cold weather of a mountain top and be resistant to shocks and moisture was also key. Throughout the development process, the brothers say that gathered extensive feedback.

“We really wanted a user-centred device,” says Darius Sahebjavaher. “We wanted to make sure it’s not just us liking it.”

One of the best places they found to get feedback from potential customers was on ski hill chairlifts.

That type of feedback led them to add a walkie-talkie function to the device, a button on it integrates with with walkie-talkie app Zello.

The brothers say the speed and ease of walkie-talkie style communication makes sense on a ski hill.

“For example, you’re flying down the mountain and you just missed a hidden rock and your buddy’s right behind you, good luck trying to call him,” says Ramin Sahebjavaher.

The walkie-talkie app also allows users to talk to more than one person at once.

While this is the first time the pair have launched a product on their own, they’ve worked on similar projects for other companies in the past.