Amazon in New York: Why the Break-up Is for the Best

It’s been two months since Amazon pulled out of its plan to develop part of their HQ2 in Long Island City, and despite attempts to get the company to reconsider, it looks like the deal is officially dead.

Depending on who you talk to, this is either a huge win for community engagement and future city building or a massive political failure that will have economic repercussions for decades to come. There are, however, a few things we can all agree on.

Here is what we learned from Amazon canceling HQ2 in New York, and why it might be for the best.

The City’s Tech Sector is Still Growing (and Fast)

If this proves anything, it’s that New York continues to be a big draw. Amazon even felt the need to profess their love when announcing the pull-out, noting the city’s “incomparable dynamism, people, and culture.”

We recently wrote about how New York was poised to surpass Silicon Valley and highlighted this dynamism, as well as the city’s diverse industries and workforce. As an example, we quoted Shan-Lyn Ma, the Founder and CEO of Zola, who put it this way: “If you’re in fashion, if you’re in the financial services […] or any industry that happens to thrive in New York, then you want to be here, because it’s a 10-minute ride to anyone you would ever want to meet, and you could set up a meeting that morning and meet them that afternoon.”

This sense of being in the center of it all is why so many tech giants have already expanded into New York in the last ten years. Google, Facebook, Uber, and Twitter, for example, all have offices in the city, and despite Amazon backing out of Long Island City, the company still has leases for more than 400,000 square feet of office space.

New York’s tech industry is now the third-largest component of its economy. It is also the fastest-growing – the city added more than 76,000 technology jobs over the last decade. In all, there are now more than 7,500 New York-based tech companies, which employ more than 120,000 people, an increase of 60 percent in 10 years.

The growth of the industry, though, may have been part of what doomed the Amazon deal. 238 cities threw their hat in the ring for the company’s HQ2, and the majority would have done just about anything to get the nod, regardless of what Amazon demanded.

But as the numbers above make clear, New York is not like everywhere else. Ultimately, this is why opponents of the deal were so determined to fight it; New York’s economy would have benefited from having Amazon, but it’s already proving that it doesn’t need Amazon.

The World of Work Is Changing

According to estimates, Amazon would have created anywhere from 25,000 to 40,000 new jobs over the next decade. If New Yorkers didn’t roll out a massive red carpet, it’s because the world of work is changing quickly, and it’s making many people nervous.

According to BrainStation’s 2019 Digital Skills Survey, 74 percent of organizations are actively involved in digital transformation, and 89 percent claim there are elements of their products and services that did not exist five years earlier. However, nearly half of employees fear change when digital transformation initiatives are introduced, and almost 60 percent are concerned about job security. Considering the change proposed to the city’s workforce and neighborhoods, it’s easy to understand the less-than-enthusiastic response afforded Amazon.

As Eduardo Porter wrote in the New York Times, “there is a small island of highly educated professionals making good wages at corporations like Intel or Boeing…that island sits in the middle of a sea of less-educated workers who are stuck at businesses like hotels, restaurants and nursing homes.” 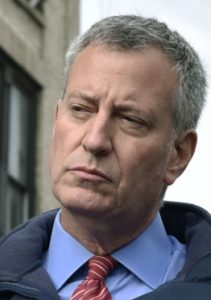 To use his example, a restaurant worker might not feel very confident about landing one of those specialized positions at Amazon. They might, however, worry about the company’s impact on their neighborhood and the cost of living, especially when it was revealed that Amazon, one of the richest companies in the world, would receive a $3 billion incentive package.

Mayor Bill de Blasio tried to defend the incentives, saying the deal had an “astounding return on investment,” which would create “an unprecedented number of jobs” and turn New York into a five-borough city that did not have to rely on Manhattan. That might have been true, but it was still hard for some to accept, given how tight-fisted the city has been when it comes to funding things like education, affordable housing, and upgrades to the aging subway system – issues that were only magnified by the news that Amazon executives planned on using a helipad as a transportation hub.

To address these concerns, the company sent a flyer to Queens residents in the new year, touting “career training for local residents,” which included “technology and relevant training that will help New Yorkers be better equipped for Amazon and other potential employment opportunities.”

There is a good reason they included this: Around the world, organizations are reskilling employees to prepare for the future and to address the anxiety caused by the changing world of work.

Amazon evidently understood the importance of skills training for the future but waited too long to address it. Had retraining been a part of the conversation earlier, it may very well have limited some of the opposition to the deal.

This Could Have Been Handled Better

It’s hard to shake the feeling that this was a poorly managed process. Michael Gianaris, a State Senator who represents Long Island City, said, Amazon “acted like a petulant child” who picked up and left when “a community that was going to be profoundly affected by their presence started asking questions.”

In an op-ed column, de Blasio echoed the sentiment.

“Put simply: If you don’t like a small but vocal group of New Yorkers questioning your company’s intentions or integrity, prove them wrong. Instead, Amazon proved them right. Just two hours after a meeting with residents and community leaders to move the project forward, the company abruptly canceled it all,” he wrote.

It’s worth remembering, however, that de Blasio was part of the team that had hammered out the deal in secret, without input from State Senators or city council. The deal even went through a General Project Plan (GPP), instead of the usual Uniform Land Use Review Procedure (ULURP), which needs to be voted on by New York City Council.

In its statement, the company did not address this lack of community involvement, and instead put the blame on “a number of state and local politicians,” who they said, “have made it clear that they oppose our presence.” Many took that as a shot at the deal’s most vocal opponents, including Alexandra Ocasio-Cortez, who was quick to celebrate the canceled development.

“Today was the day a group of dedicated, everyday New Yorkers & their neighbors defeated Amazon’s corporate greed, its worker exploitation, and the power of the richest man in the world,” she tweeted. She would later defend her stance by picking apart the incentive package, which included a $505 million capital grant and $897 million from the city’s Relocation and Employment Assistance Program.

“It was written into the deal that we were going to build a helipad for Amazon. We were actually putting hard capital into helping them build their campus while we’re constantly told that there isn’t enough hard capital to heat the rooms in NYCHA,” she said.

Congresswoman Ocasio-Cortez, and many of the deal’s critics, had argued that these kinds of investments should be made in infrastructure, education, and training programs, which would diversify the city’s economy and boost entrepreneurialism. Already, the city’s startup ecosystem is valued a $71 billion, the third most valuable in the world, and it’s growing.

New York betting on itself may not be as sexy as a brand new tech campus in an underdeveloped part of the city, but given the changing world of work, and the tensions it is creating, it may be what’s needed.

And really, if you needed a group of people to bet on, who better than New Yorkers? As de Blasio tweeted when the deal fell through, “You have to be tough to make it in New York City.”