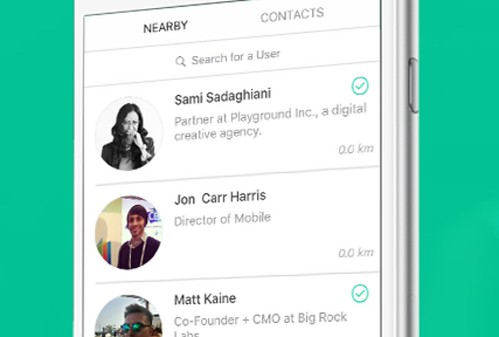 Co-founder and Chief Marketing Officer Matt Kaine describes the app as a “proximity-based networking app—think LinkedIn meets Tinder.” It shows users other professionals near them that they can request contact with and begin chatting, and also aggregates networking events.

Kaine says inspiration for the app came to him when he was launching an office of the US-based creative and fashion recruiting company 24/7 in Toronto and saw first-hand the frustrations of trying to make a real connection with someone from behind a computer.

“While I was in line at Fusaro’s one day I was talking with a colleague about some of the struggles we were facing,” says Kaine, “A lady in front of us overheard us and joined the conversation. One thing led to another and we exchanged business cards. We went on to do a lot of business together, which really saved my ass to be honest.”

Kaine says the positive real-life interaction had a considerable effect on him, and he kept the idea of proximity-based networking in his back pocket until Big Rock Labs was formed. Founded approximately two years ago by Kaine, Harry Seemann and Steph Bigue, the company immediately went public and is currently traded on the Canadian Securities Exchange (CSE) and Frankfurt Stock Exchange (FSE).

Kaine says the team chose their admittedly unusual route because they felt that finding funding for a freemium product in Canada would’ve been far more difficult. Since then, the three-person team has grown to eight, and Reach has gone to market with its 2.0 version this past month, after a beta phase in October 2015 and a pre-marketing launch of 1.0 in January.

The company reports having over 5,000 users in Toronto alone, and has partnered with recurring local events such as WeAreWearables and Tech in Motion held in the city. At some past events, Reach has gamified networking by projecting a real-time screen of connections being made. Though the app is not yet generating revenue, Kaine says there is a plan to monetize in the near future.

“What we want to do is nail the product first. We’re getting close. We’re in the middle of brainstorming the next iteration and with that iteration, I believe it will be monetizable.” Kaine says that over the next year the company will be focusing on catering to the small to medium-size business owner demographic—those who cannot afford HR staff or outsourcing but need to find talent—and also to event organizers who want to enrich their events as well as get useful analytics on their attendees.

“We just love to help people connect in general,” says Kaine, “I think there’s an innate human need to feel connected and technology, funnily enough, has taken us backwards because it’s almost too easy. So we’re going back to the days where you had to get out there and make real handshakes, using what we have in terms of technology to make that happen.”