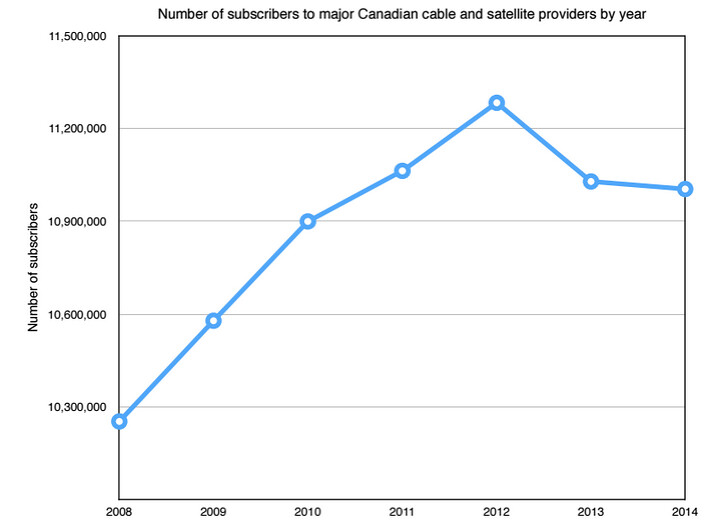 Canada’s large cable and satellite providers have had another year of declining subscriber numbers.

The seven largest cable, satellite and IPTV providers lost a total of over 24,000 subscribers between Aug. 31, 2013 and Aug. 31, 2014, according to disclosures filed to the Canadian Radio-television and Telecommunications Commission and released last week.

While it’s a smaller dip than those companies saw last year – when they shed over 250,000 customers – it suggests that the cord-cutting trend is continuing.

Overall, only IPTV providers added customers during the year.

The other cable companies whose disclosures were released by the telecom regulator: Cogeco; Shaw, which offers both cable and satellite services; Quebecor, whose cable offerings are marketed under Videotron name and Bragg, who markets most of its cable offerings under the EastLink brand, all saw declines in subscription numbers.

While the data released by the telecom regulator doesn’t include every Canadian cable and satellite company – there are a number of very small regional providers – it does cover the far majority of pay TV customers.

In 2013, around 95 per cent of all pay TV subscribers in Canada were customers of one of the seven companies required to make these public disclosures.

But the most important number might not be the year-over-year decline. It might actually be the number of Canadians who never subscribed to pay TV in the first place.

The Canadian population grew by around 300,000 people between August 2013 and August 2014, the period captured by these numbers. That growth is pretty average for recent years and, according to Statistics Canada, that tends to work out to about 170,000 new households every year.

With pay TV subscription rates hovering around 90 per cent in recent years and the seven big cable and satellite companies taking around 95 per cent of that market, those companies need to be adding around 145,000 new customers a year just to maintain their market share.

Up until 2012, they were pretty successful at that. That year, almost 84 per cent of Canadian got their TV from one of these companies. In 2014, it appears to have dropped below 80 per cent for the first time in at least six years.

While it’s possible that smaller, regional cable providers and new entrants (there are some new IPTV providers popping up) are taking a larger slice of the pie, it’s more likely that many of these new households are not subscribing to pay TV and that for every one that does, someone else is cutting the cord.

More information on that is set to come later this spring, when the CRTC releases overall data for the entire industry.