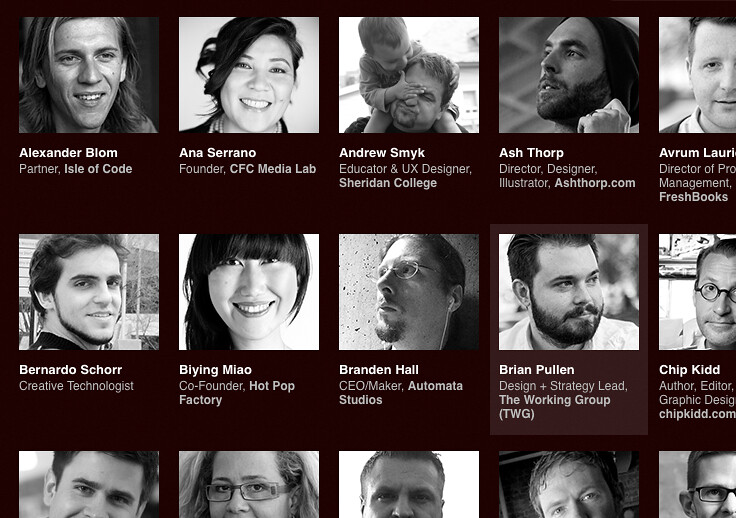 Hundreds poured in to the Hilton Hotel conference venue for FITC Toronto 2015, which spanned from April 12-14.

The technology and creativity event covered a breath of topics in the world of business and entrepreneurship, and how these worlds often intersect with art and creativity – including talks as technical as making virtual reality a part of the future living space, to inspirational presentations addressing failure as part of the entrepreneurial journey.

On the last day of FITC, tables were lined up on the main conference floor, including those from Microsoft, Lighthouse Labs and Sheridan College’s Faculty of Animation, Arts And Design. The most interesting table had to be from California-based Fuel digital agency, which included an interactive “spaceship” where people could immerse themselves and flip switches in a space-survival simulation. These exhibits provided entertainment while people waiting for several talks scheduled throughout the day.

Jason Theodor, who used the popular drama The Walking Dead as a backdrop to his speech on working for a profit-driven company (what he calls a zompany), talked about traditional workplace culture needing to change in order to keep workers inspired and proud of the place they work – and said the fact that many Silicon Valley businesses and startups that are known for a collaborative workplace culture often have the happiest employees.

“It’s a shift in mindset that has to happen,” Theodor says. “The purpose-driven company is massively beneficial.”

He cites the example of Peter Diamandis, the founder of Singularity University in the United States, whose yearly contests asking participants to solve a global problem like clean water access often brings about ‘spinoff’ companies who are more interested in solving problems than making money.

“Look at some of the most popular and successful companies right now,” Theodor says. “They are not traditional. They might be huge and they might have a hierarchal structure, but they’re at least attempting to be different.”

Thanks to the ever-increasing accessibility of technology, and the fact that many people can find an audience using social media, the playing field has become more level for people who want to start their own businesses.

“I think that empowerment is creating more entrepreneurial ventures from people who are saying, I want to do something I love, and I’m going to figure out how I’m going to find my audience and get paid for it,” Theodor says.

Biying Mao, co-founder of Toronto-based 3D printing startup Hot Pop Factory, exemplified what Theodor said as she talked about how the rise of 3D printers and other maker technology has so much potential for companies to create unique products, and for customers to tailor their products to suit their needs.

“I think this is going to be a movement called mass customization,” Mao says. “While all of our products are currently mass produced, I think a lot of these tools will allow us to customize things that live in our digital world.”

As FITC was an event that highlighted the relationship that humans have with technology and how it shapes our lives, art engineer Micah Elizabeth Scott’s talk was an interesting one. She’s an engineer-turned-visual artist who uses her technical expertise to create art, often in the form of interesting pieces that technology like interactive sculptures and control loops.

“I feel like most of what technology is used for is just like an automated bureaucracy,” Scott says. She adds that she’s more interested to see the ways that technology can make it possible to take natural phenomena in the real world and tamper with it.

“We can create computer models of these complex particle systems and just see where they go,” Scott says. “These are intended to take things out of the real world, put them in a box and poke and prod in ways that wouldn’t really be possible in the real world.”

Scott is a great example of the fact that, as technology advances at such a fast pace, humans will be able to use them beyond just making our lives easier – technology may even be able to tell us something about what it means to be human, and allow crossover of different disciplines.

“All of these things we do, engineering, science, arts, they’re fine but the thing that is amazing about the time we’re in is the boundaries between them,” she says. “These things are usually uncomfortable, but if you have opportunities to explore outside of your comfort zone, I highly recommend it.”