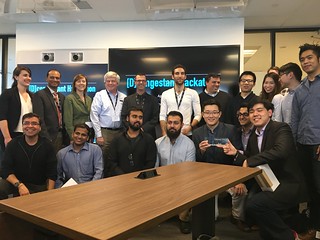 In an effort to tackle congested roads and highways in Toronto, the South Core Innovation Hub and other major employers in downtown Toronto put on a [D]congestant hackathon that ran from Friday, April 1 to Sunday, April 3.

Throughout the weekend, dozens of teams spent grueling hours honing and perfecting their ideas. After a screening process that started Sunday afternoon, 15 teams were selected to pitch their ideas to a panel of expert judges, that consisted of academics, representatives of major downtown employers, and representatives from the City of Toronto.

In the end it was Hover, a team of engineers whose idea of matching carpool passengers and drivers by a shared set of inride preferences, won the day.

Where most carpool services match people based on starting and ending points, the team’s Hover idea will take the actual trip itself into account. People can select their drivers based on what music they typically listen to, or the temperature they prefer.

“Carpooling is a really good idea in theory, and a lot of policies have tried to implement it, but no one has really looked at this angle,” said Malik Ismail, one of the members of the winning team.

The theme among all the winners was personal comfort and incentives for individuals, rather than big data solutions, or other ideas involving charging drivers when they enter downtown Toronto.

Aside from the time constraints, and the simplistic nature of the pitch process, Steve Buckley, the general manager of Transportation for the City of Toronto and one of the judges at [D]congestant, says the reason for this is simple.

While none of the data analytics or ideas involving charging drivers for their trips downtown ended up winning any prizes, Buckley says that many of those ideas are taking shape at the city level.

“A lot of these things touch on what we’re doing. We’re working on adaptive signals. There were some things in there about pricing and tolling, we’re actually in process of hiring a consultant to do a polling and pricing study for the Gardiner. We’re also looking at how we can improve travel demand management, and carpooling. If we can get little nuggets out of these that influence our program, to me that’s a success,” said Buckley.

The two runner up teams were focused on driver behaviour to ease the congestion in downtown Toronto. Eaze, the team that came in third, helps users to know when the ideal time to leave their place of origin to avoid high traffic volume. The second place finisher was Eco Cred, whose main function would be giving users points for avoiding driving during rush hour, that could then be redeemed for cash prizes.

For having the best idea at the hackathon, Hover will be awarded $5,000, the chance to further develop their idea with Cisco and a chance to pilot their idea in the real world with the help of PwC and the Mayor’s office. Each member of the group will also receive a community membership to the Centre for Social Innovation, and $100 worth of Uber credits.