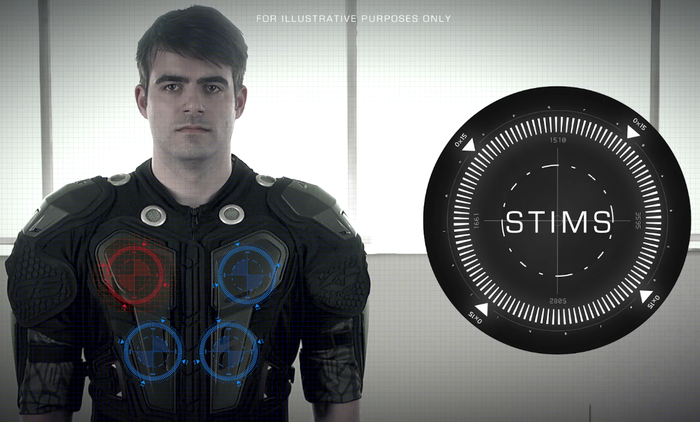 Videogames have evolved significantly since the early days of Pong and Tetris. What was once a mere pass time is now a full on experience—a lifestyle. This week Ontario’s IFTech is hoping to take gaming to the next generation with ARAIG (As Real As It Gets) a multi-sensory suit that can capture all the gunshots and impacts videogames have to offer.

Game developers will now have an opportunity to utilize a whole new dimension of gaming. What was once a product limited to sight and sound, videogames can now be a full body experience. ARAIG works from the fundamental level, like a controller vibrating when a sensation in the virtual world calls for it, but only to a larger scale. The immersive wearable technology is designed to trigger feedbacks and sounds to the torso and upper arms. It will increase awareness in the videogame without limiting mobility or peripheral vision.

With ARAIG as their backbone, IFTech is launching a Kickstarter campaign to promote and finance the new gaming technology. ARAIG is quickly gaining traction, earning roughly $83,000 of funding as of this morning. Their eventual goal is $900,000. With 23 days to go and more than 350 backers already behind the new gaming suit, ARAIG might just be the new fashion in gaming.

“We’re trying to make a complete package for feedback for gamers,” says Brodie Stanfield, president and co founder of IFTsech Inc. “From sound to feedback and vibration, we are giving a foundation to everything that a player should get from a game.”

Stanfield and his father Michael designed ARAIG with a lot of optimism. They are hoping that one day game developers will expand on the features and build specific uses for each haptic feedback to suit the game play of each game. Although the original prototype spawned from first-person shooters, Stanfield believes that there is limitless potential for his new technology.

Gaming suits are not a brand new idea. The Tactile Gaming Vest, developed at the University of Pennsylvania allow gamers to feel the sensation of being shot and/or stabbed when their character in the game suffered such fate. But Stanfield believes that is not positive for gaming purposes, instead he wants ARAIG to feel seamless with the game play, not jarring pain.

Videogame developers, technology manufacturers and recreational gamers alike are uncertain how this modern style of gaming will catch on. The Kickstarter campaign will give IFTech a solid gage on how developers and consumers feel about ARAIG.

“For us, it’s about seeing whether people really want this,” Mr. Stanfield said. “If they do then we can make what we think is the next level of gaming. If it doesn’t work out then we see what that means and where they actually want to go.”