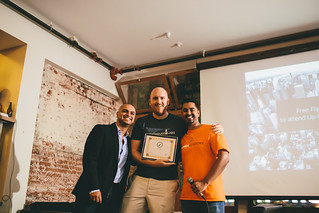 Many cliches should be burned on a pyre. But some endure for good reasons—like the hoary old chestnut about the third time being the charm.

For Launch Academy’s third Pitch Day was by all accounts the most successful yet. A sold out event with a waiting list 50 names long, Thursday night’s competition saw entrepreneurial faces, new and familiar, cheer on talented competitors as they stepped onto the pitcher’s mound to see if they have what it takes in the big leagues. The success of Launch Academy itself may have been the only thing that prevented the night from being an ironclad success; fifty steaming hot pizzas, two hundred bodies and a humid August night added up to one sticky room.

“It’s been exactly a year since our last competition, so we were really excited to showcase an entirely new crop of entrepreneurs this time around,” says Launch Academy’s Executive Director, Ray Walia.

“A lot of these startups were just an idea three months ago, so it’s been really exciting to see how quickly they’ve grown into real companies while under Launch Academy’s roof,” he added.

In the students’ division, Fetch made themselves happen with their top prize win. Novogadget’s SafeRing shows great promise, if the anti-assault jewelry can resolve the issue of false-alarm prevention, and Loodo Analytics rounded out the top three. Mack Flavelle made for an enthusiastic MC, equally comfortable giving audiences his best smoulder to get the crowd’s attention as his best chain of f-bombs, and a bit in which Lloyed Lobo and Ray Walia debated which of the two of them would be considered the ugly twin was well-received.

The remainder of 2014 promises to highlight the best that Launch Academy has to offer. Readers can expect an announcement of the second Cascadia Startup Day venue soon; Walia will be scouting locations this week.