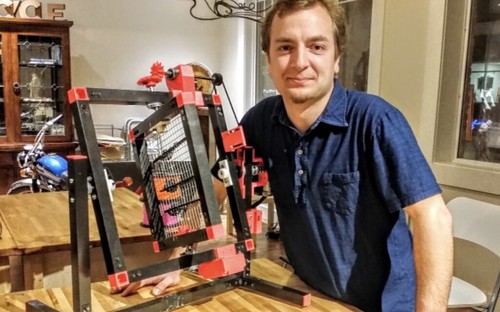 Jon MacDonald likes to make things with his 3D printer.

They only problem is that other people also like what he makes.

He says he made a snow globe for a magazine in Calgary, where he lives, that featured the city’s skyline and he was inundated by requests from friends and family who wanted their own. It was impossible to keep up; printing just one of the snow globes took around eight hours.

So MacDonald starting looking for a way to make larger runs of his designs.

It was a frustration that motivated him to build his own solution – a device called the REVOcaster.

Now, he’s turning to crowdfunding to bring it to market.

MacDonald isn’t new to the 3D printing business, he’s the lead project coordinator and founder of MagicMaker, a Calgary-based company focused on 3D printing. But this is the first time that MagicMaker, which got its start selling filament, has launched a product of its own.

The REVOcaster is a rotational casting machine, melted plastic or another polymer is placed inside a mould which is then spun around by the machine, giving it its shape.

The technology isn’t new, rotational casting machines have been used to shape plastic since the 1940s, but they’re no longer used in industry.

“They were pretty slow for doing big parts and were replaced by injection moulding, so you haven’t seen these machines around for quite some time,” MacDonald says. “But on a desktop, or in a small workshop, or a makerspace, they’re actually quite effective, they can be a lot faster than current tools.”

He says the device managed reduce the time it took him to make a single snow globe from eight hours to 10 minutes.

And it’s not just for plastic, MacDonald says, with a food safe mould, the device can also be used to make things out of chocolate.

“The chocolate industry has big spinning chocolate machines, that makes the hollow easter eggs and the hollow Valentine’s hearts that you see, but again there’s no desktop version of that, there’s no machine that does that on a small scale for someone that just wants to tinker with chocolate,” he says.

The device works on its own – no software or 3D printer required.

“You can definitely use it as a stand-alone, there’s already a ton of existing moulds out there that you can use,” he says. “The reason that it’s nice to pair with a 3D printer is that you can make custom moulds.”