As Apple prepares to reveal its Q4 earnings on Tuesday, Microsoft’s Surface sales have surged 38% in the first quarter.

The tech giant reported $926 million in revenue during the quarter, up from $672 million a year ago thanks to impressive sales of its Surface Book and Surface Pro 4.

Although Microsoft did not reveal total unit sales, the increase comes as Apple attempts to reverse their declining iPad sales. Apple reported iPad’s 10th straight down quarter in July as unit sales dropped 9% to 9.59 million. Tuesday’s announcement is expected to see sales of 9.1 million iPads during the last quarter.

Apple’s consumer-focused iPad still casts a massive shadow in the tablet game, but Microsoft may be able to change that with their long-term enterprise relationships.  Following several updates to the Surface, it is finally seeing adoption from IT managers. This was confirmed by Microsoft CEO Satya Nadella claiming orders of ‘500 or more’ Surface devices were up by 70% in the last quarter. 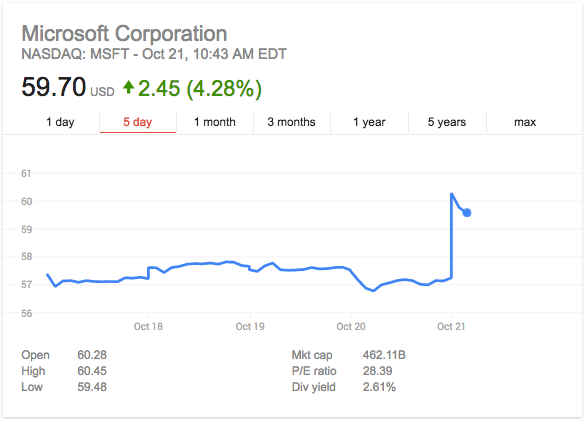 Microsoft reported revenue of $22.33 billion, beating a Wall Street estimate of $21.71 billion.  It’s stock rose 5.5 percent in after-hours trading and is holding around $60/share this morning.