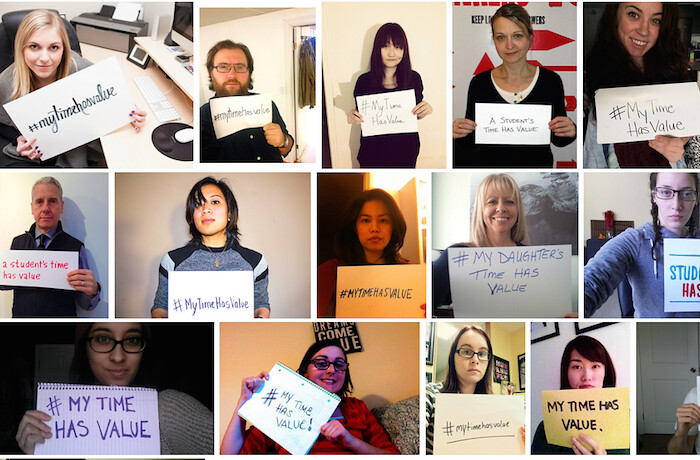 Student representatives of the Association of Registered Graphic Designers are issuing a call to the creative community to speak out against speculative work by sharing the message “My Time Has Value.”

The initiative is a response to a contest launched by the Department of Canadian Heritage asking post-secondary students across the country to design a logo for the 150th anniversary of Confederation. The Government of Canada’s decision to “engage in the unethical practice of speculative work” received backlash from the design industry.

This week RGD student members reacted with the launch of a campaign that encourages students, designers and other supporters to share pictures of themselves with the hashtag #MyTimeHasValue across social media platforms to “voice their discontent and assert that they will not be participating in the contest.”

“Students are busy preparing for a future career in a world where they can be paid for the work that they do. Think about how important it is that potential clients, like the government, recognize that your worth as a graphic designer needs to be compensated, so that you can make a living once you graduate,” explain Sam Campbell and Daniela Luchetta, co-chairs of the RGD Student Representative Committee.

The issue extends beyond students, to the many contests and situations where designers are asked to provide commercial work for free, they say.

“This process exploits and undermines the value of all designers’ work, while at the same time teaching erroneous lessons about the process necessary to design effective communications,” cautions RGD President Stüssy Tschudin.

The government has not responded to any industry concerns, according to the group.