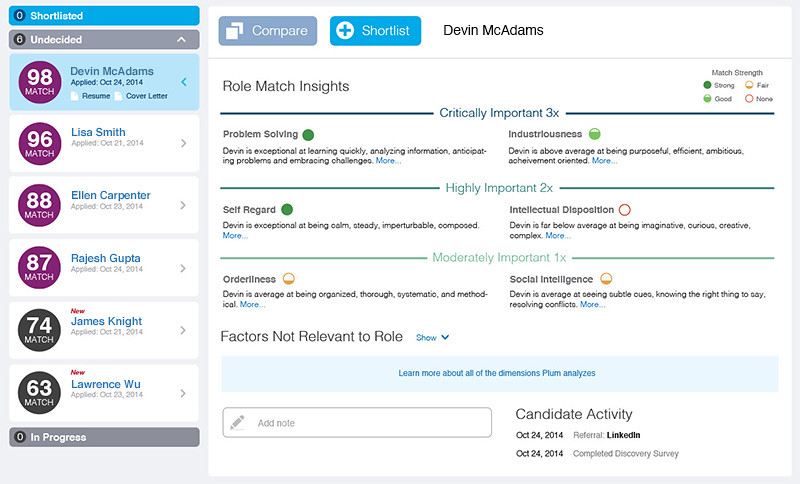 Caitlin MacGregor was launching a new company to sell a Canadian software product in the United States when she discovered that if she hired someone who didn’t work out, it would cost the company around $300,000.

Determined to get it right the first time, she decided to use psychometric evaluations (also known as aptitude or personality tests) to vet every candidate.

It led her to look at people who didn’t have the education and experience that a software distributor would normally be looking for.nOne of those candidates who scored highly was Christine Bird.

“If we had relied on the traditional hiring process, she’d never have made the shortlist,” MacGregor, who hired Bird and began grooming her for management.

Now, Bird is MacGregor’s co-founder at Plum, a Kitchener-based startup that wants to make psychology-based assessments one of the first steps in the hiring process.

Plum uses an test to measure personality, problem-solving ability and social intelligence, things that MacGregor says are better predictors of what a person will be good at.

Employers also fill out an evaluation about the role they’re looking to fill. Plum can then give a “unique match score, related to that unique role,” MacGregor says. That match score can be used by an employer to shortlist the candidates they’d most like to interview.

While there are companies that already do psychometric evaluations, their processes tend to be expensive and labour intensive – meaning that even businesses that use these sorts of evaluations generally do it late in the hiring process. Some companies even wait until after they’ve hired someone.

MacGregor says that’s too late for it to do any good.

In fact, Plum wants people use its product even before the real hiring process even begins.

MacGregor says she already has several customers in that space, including Binder, a job search platform for recent grads, as well as U.S. platforms catering to veterans and people who incarcerated. The “next big milestone,” she says, will be “implementing on two-sided platforms.”

While there are other startups in the space, MacGregor says there are several things that set Plum apart from its competitors, including a stronger focus on science.

Plum has partnered with Neil Christiansen, a professor of psychology at Central Michigan University whose work focuses on “personnel selection, performance appraisal and job analysis.”

Plum is currently raising money through a seed funding round with a rolling close. While MacGregor wouldn’t disclose how much has been raised so far, she did say that some Ontario-based angel investors “have gotten the ball rolling.”

“It’s been a lot of hard boot-strapping,” she says. “Funding will allow us to continue executing.”