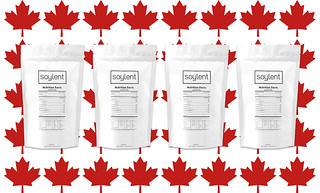 The popular meal replacement Soylent announced today that it is now available to Canadians and shipping direct-to-consumer via Canada Post.

Some consider Soylent is a pioneer in food technology, delivering engineered staple meals to consumers that provide all the essential nutrients required to fuel the human body.

Its nutritional makeup is comprehensive and includes protein, carbohydrates, fats, fiber, and vitamins and minerals such as potassium, iron, and calcium.

“I am thrilled that our first international expansion has taken place at last,” said Rob Rhinehart, Soylent Co-founder and CEO.

“Since the beginning of this story we have seen a tremendous outpouring of support from Canada and are pleased to be able to bring our vision of the future of food to our northern neighbors today.”

According to today’s announcement, Canadian interest has been strong since the Company’s original crowdfunding campaign, with more than 500 Canadians pledging their support at that time. Since Soylent began receiving customer service inquiries in May 2014, there have been more than 1,000 requests for shipping to Canada.

Rhinehart along with fellow co-founders COO Matt Cauble, CMO David Renteln and CTO John Coogan developed Soylent after recognizing the need for a simpler, more efficient food source that could provide maximum nutrition for minimal effort at a low cost.

Soylent contains all of the elements of a healthy diet, with limited contribution from less desirable components such as sugars, saturated fats, or cholesterol. Soylent has a neutral taste profile by design, giving people the ability to easily adjust Soylent flavoring based on their personal taste preferences.

In 2013, Los Angeles based Soylent raised more than $3 million on CrowdTilt in the largest crowdfunded food project in history. Earlier this year Soylent raised a $20 million Series A funding round led by Andreessen Horowitz with general partner Chris Dixon joining the company’s board.