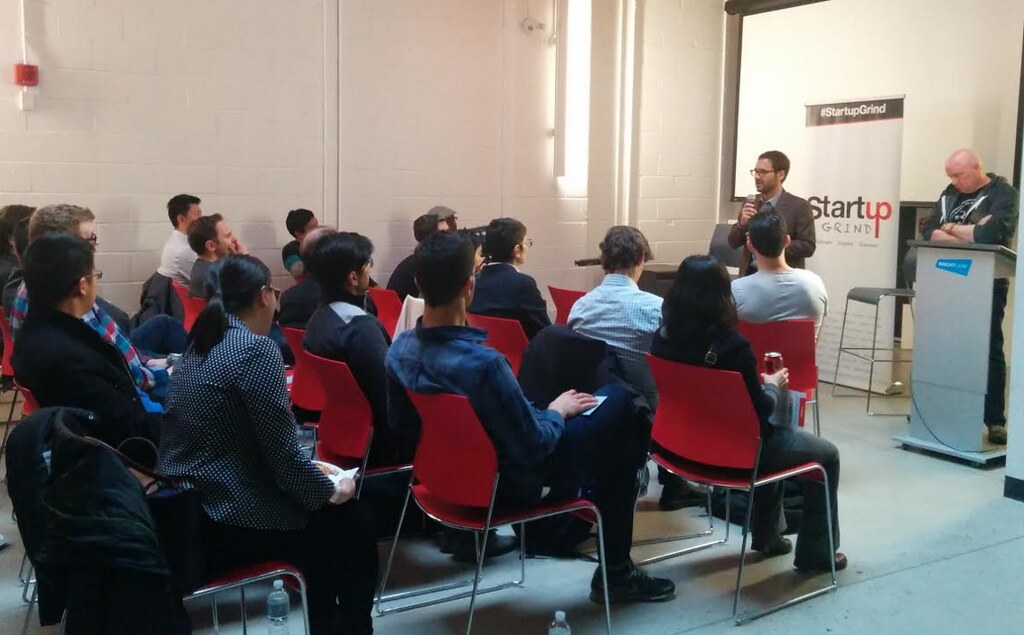 Startup Grind Toronto, a chapter in a global community whose aim is to host meetups that inspire and educate entrepreneurs, held their April meetup on Thursday at the Brightlane coworking space.

Hosted by Toronto chapter director Michael Cayley, the event brought notable members of the Toronto startup community together to talk about how to take advantage of opportunities in the industry and make your startup work.

The event started with a few words from John Gavigan, the executive director of 43 North and one of the sponsors of the event. As the world’s largest business idea competition, 43 North gives away a top prize of $1 million, six $500,000 prizes and four $250,000 prizes to the teams who can prove that their startups are viable. The winners move to Buffalo, New York for a year to take advantage of an incubator space there, as well as take advantage of mentor networks. He had the chance to talk about common mistakes entrepreneurs make when pitching to 43 North.

“It’s just not being focused enough,” Gavigan says. “It’s being too broad about what you’re reaching for, and you should ensure that you cater to a niche market that is scalable within that market.”

They also brought in Jenny Tcharnaia, the only Canadian winner of last year’s competition based in Markham, to talk about her experience with 43 North as the founder of triMirror, a real-time fitting platform that allows people to try on real clothes on accurate avatars.

“It’s a small world in Buffalo so everyone knows each other, so people have introduced us people that we need,” Tcharnaia says. “For example, for us it’s really important to be connected to the big malls in Buffalo, and we’ve got partnerships with them.”

Mark Evans, a Techvibes contributor and author of Storytelling for Startups, came in to talk a bit about his book and the importance of telling a good story in order to engage customers.

The highlight of the event was a Q&A between Cayley and Mike Katchen, the founder of the Wealthsimple app that helps make investment advice more accessible with its competitive pricing. It’s one of the fastest growing online investment managers in Canada – and he says Toronto is the perfect place to grow fintech services. Besides a back-and-forth between Cayley and Katchen, the audience had ample opportunity to ask Katchen questions about his secrets to success.

“Toronto is awesome, we have the third largest stock market in the world and all of the banks are based here,” Katchen says. “Toronto is a city of financial services. It’s a tremendous market to work with.”

Gavigan is cognizant of the potential of Toronto startups, saying that the aim of sponsoring the event was to get more exposure in this city even though they are a US-based competition. “You have so much talent in Toronto, there’s so many great idea and smart people,” Gavigan says. “We really want to reach out to the startup community in the region to ensure that they’re aware of the different resources that are available to them.”