For developers at theScore, it’s not always about sports–sometimes it’s about connecting friends and colleagues and injecting a little bit of healthy competition.

Toronto’s theScore—known widely for their flagship sports and esports apps—has just released the first ever fantasy sports game for the Instant Games platform on Facebook Messenger. Sports fans can select players in several different leagues, lock in picks then compete with their friends and others around the world to see who has the best lineup, all for free.

Featuring the NFL, NBA, NHL and EPL soccer, the new game is the only way for Messenger users to get their fantasy sports fix on the Instant Games platform, a Facebook initiative that now boasts over 70 games. The platform was a natural progression for theScore to expand into as more than 1.3 billion people use Messenger every day.

The game works like this: click this link and it will pop up in the messenger feed, just like a conversation with a friend. Pick a league, then lock in five players that are likely to perform well. The catch is that there is a salary system in place—better players cost more, so it leads to decisions around picking one amazing player and a few mediocre ones, or balancing it all out. After every game has been played for the day or weekend, the game’s referee chatbot will let the user know how they fared.

TheScore recognized the popularity of daily fantasy sites like DraftKings, along with season-long offerings through ESPN and Yahoo and the company’s own similar standalone app SquadUp, and wanted to condense the fantasy experience into something fun and quick for both laidback and hardcore fans alike. Essentially something a player can pick while waiting in line for coffee.

“What we learned from SquadUp is that there is something about fantasy sports that’s really about how to connect with friends around sporting events,” says Riaz Lalani, theScore’s VP of Product. “Our mission is to empower the fan experience, and fantasy is a big part of that mission.” 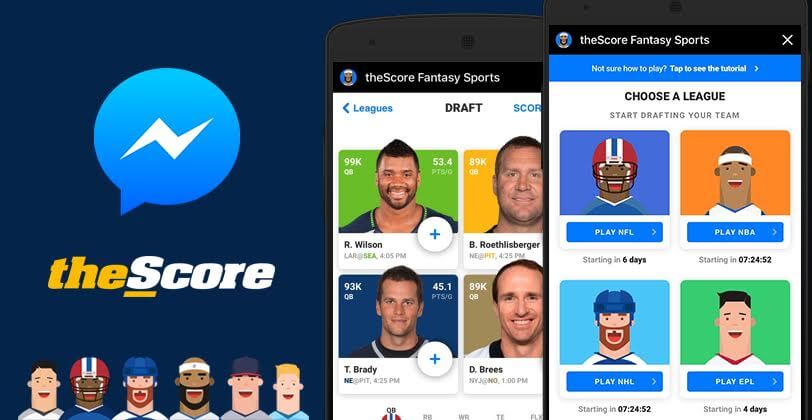 Messenger is a perfect way to embrace that fan experience, as working with Facebook and the Instant Games platform bridges a lot of gaps. Since so many people use Messenger, it inherently has a high retention rate. Also, friends are already there using the app so inviting them to play is seamless. There are unique ways to connect, whether it be a group match or just a one on one.

“The heavy lifting of connecting with people has already been established with Messenger,” explains Lalani. “A lot of interesting mechanics can be amplified on Messenger because of the reduced friction.”

Lalani has a lot of experience with this kind of thing too, considering that before his role with theScore, he was the head of product for Zynga, a massive game company that shot into popularity through Facebook browser games like Farmville and Words With Friends.

“Billion dollar companies like Zynga were made because Facebook paid attention to gaming on desktop,” says Lalani. “Now they’re doing it on mobile. Well I’m not currently in a game company but I have this game and I understand the value of that social fabric Facebook provides.”

There is a lot of room to grow in this space. Because theScore also creates content based around articles, video updates and more, things like rankings or recommendations could be implemented. If the platform eventually allows for it, monetization is also an option. For now, it’s all about exposing new users to what theScore offers.

“It’s almost like the new marketing,” says Lalani. “Instead of spending millions on ads plastered in subways, we spend that money on engineers to build real one on one experiences with millions of people.”

Plus, there’s always that option of trash talking a colleague when they end up coming last in the daily company tournament. That will always be fun.