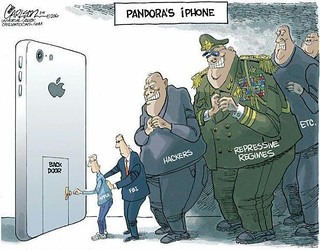 Tim Cook, the CEO of Apple, this week wrote an open letter to customers surrounding privacy concerns in the US.

“The United States government has demanded that Apple take an unprecedented step which threatens the security of our customers. We oppose this order, which has implications far beyond the legal case at hand,” Cook wrote. “Customers expect Apple and other technology companies to do everything in our power to protect their personal information, and at Apple we are deeply committed to safeguarding their data.”

An act of terrorism in San Bernardino last December saw the FBI reach out to Apple for help and Apple says that, “up to this point, we have done everything that is both within our power and within the law to help them.”

But now the U.S. government “has asked us for something we simply do not have, and something we consider too dangerous to create,” wrote Cook: “They have asked us to build a backdoor to the iPhone.”

In the wrong hands, this software — which does not exist today — would have the potential to unlock any iPhone in someone’s physical possession. And while the government may argue that its use would be limited to this case, there is no way to guarantee such control.

“We can find no precedent for an American company being forced to expose its customers to a greater risk of attack,” wrote Cook. “The implications of the government’s demands are chilling . . . We feel we must speak up in the face of what we see as an overreach by the U.S. government.”