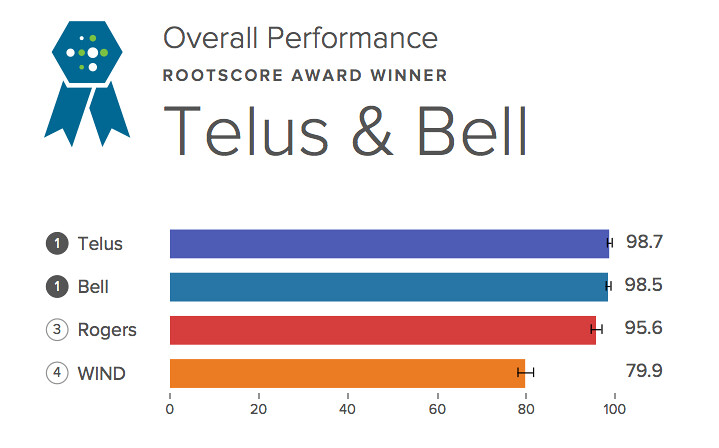 According to latest networking testing results, Telus and Bell are on top for overall performance in the Vancouver metro area, says RootMetrics.

The two carriers jumped ahead of Rogers, which won the Overall Performance Award outright last year, based on results across data, call and text tests showing how reliably and quickly each network performed.

Telus and Bell also shared the top spot in four of the five performance categories ranked by RootMetrics, showing near-perfect reliability and major gains in speed when it comes to data performance.

Telus dramatically increased its median download speed by 11 points, from 14.8 Mbps to 25.8 Mbps. Its median upload speed jumped more than 14 points, from 4.2 Mbps to 18.4 Mbps.

Bell also showed impressive speed improvements from thesecond half of 2015, with its median download speed jumping from 17.0 Mbps to 23.8 Mbps since the previous round of testing, and its median upload speed increasing nearly eight points, from 6.8 Mbps to 15.0 Mbps.

Rogers did not finish first in any mobile performance categories, after winning outright or sharing the top rankings in all categories in the previous round of testing.

Telus announced this week that it is investing $230 million in new communications infrastructure across the  city of Vancouver this year to further enhance Internet speed and capacity; upgrade every wireless site in the city to 4G LTE to increase wireless data speed and reach; and complete its new LEED Platinum national headquarters, Telus Garden.