After a two-week swarm of interest from potential Twitter buyers, the lineup has dried-up, resulting in an adjustment of their stock price this morning.

Google, Apple and Disney have all pulled out as potential suitors for a Twitter acquisition, leaving the lonely “no comment’ of Salesforce who has yet to confirm (or deny) potential interest.

Multiple publications reported on Wednesday evening that Google, the most likely of candidates, does not currently plan to make a bid for Twitter. Additionally a source close to Apple said Twitter should have “low expectations” of getting an offer from the tech giant.

This news took a toll on Twitter stock last night, dropping nearly 20% overnight and is now holding around $20.14USD/share. 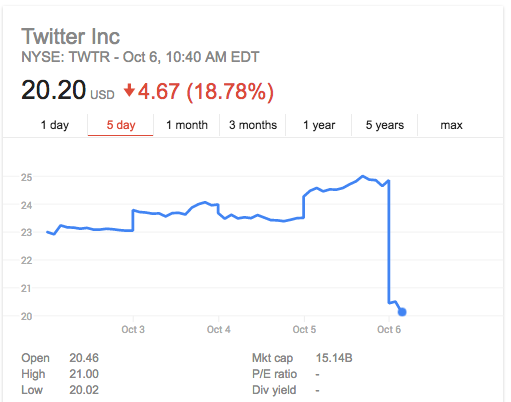 Salesforce is now considered the last man standing, and may get a better price despite any public confirmation of interest in said deal. Regardless, Twitter has tremendous value and its sale is still in motion. The most valuable asset being a wealth of data and a global distribution network that has driven the company to a top 3 social media giant for nearly a decade.

Though growth has been a point of struggle for Twitter in recent years which makes an acquisition by a giant (like Google) a potential win for all sides.

For now we will wait and see.