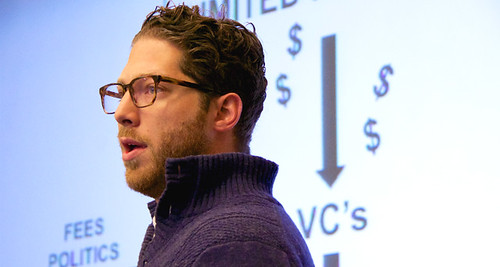 Michael Litt has been on the Canadian startup radar for quite some time, and this year is no exception.

“I feel like a chef who’s bought some ingredients but has yet to make the meal,” said Litt.

He is among the three finalists for Entrepreneur of the Year for the 2015 Canadian Startup Awards.

The award recognizes the outstanding accomplishments of an exemplary Canadian entrepreneur; in this case, Litt is being celebrated for his work as CEO and co-founder of Vidyard, an online video engagement platform for businesses to track how viewers interact with their video content.

Vidyard started out in 2010. The idea came when Litt took a drive back to Waterloo from Silicon Valley with his now co-founder, Devon Galloway.

“On the long drive, we spent a lot of time talking about projects we could kick off and ultimately turn into businesses. Video production was something I had experience with so we started there,” said Litt.

As an entrepreneur with experience working out of Y Combinator, Litt has be awarded several achievements including Ernst & Young Entrepreneur of the Year, Marketing Magazine’s Top 30 under 30, and University of Waterloo Employer of the year.

“I think entrepreneurship takes many forms – but it’s most basic comes in the perception and realization that things could be done better, simpler, faster and then takin action with respect to that perception to realize change,” said Litt.

The company has grown to over 100 employees with plans to expand to 250 following their big expansion into downtown Kitchener. Vidyard is positioned to be a global SaaS organization that will create a talent pool for future Canadian businesses and entrepreneurs. Ultimately the mission statement is to help businesses drive revenue through the use of online video. And the team has fun doing so.

“Everything we do, from the moment a candidate walks in the door, to the day of their 3rd anniversary should resemble the best experience they’ve had in the workplace. The same thing goes for how we treat our customers and partners,” he said.

But Litt has a personal goal of deploying more than $1 billion in non-Canadian capital into the Canadian economy throughout his lifetime. He says this can be achieved through Vidyard investors, customers and successes of his venture fund, Garage Capital, in the hopes of being a company that acquires instead of getting acquired.

In terms of growth for Vidyard, the company will be making a big announcement this month about bringing a series of new products to the market.

Voting for the Canadian Startup Awards close on January 17, and the winners will be announced on January 18.